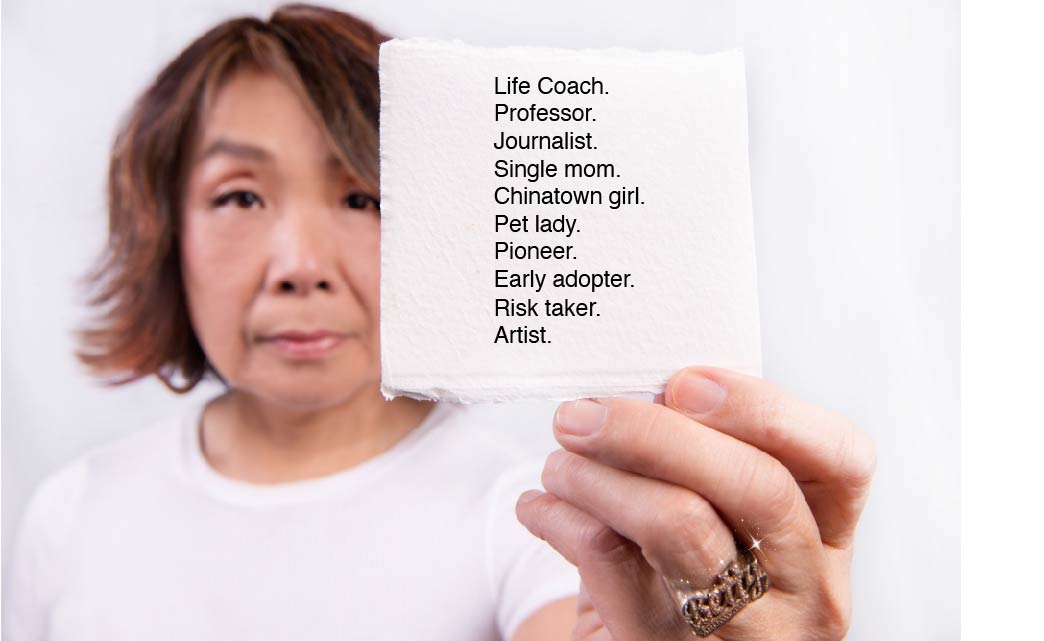 ­­Hi! Welcome to my website. My personal pronouns are she/her. I am the first U.S.-born person in the history of my ancestors. They wanted a boy who would grow up to be a doctor or lawyer. Well, I had other ideas. And today, at age 65, I’m living my best life as a coach who helps others find their own paths to happiness.

The journey began with my tough love Chinese immigrant parents. Dad was from Vietnam and Mom, from China. They had me and then, two years later, my sister. This was back in the 1960s. Very tough times, with very few Asian immigrants in this country. Home was Lyndhurst, N.J., where we were the only non-white bodies in town. Some people were kind. Others called us “chink.”

Every night, our parents watched TV news reports about the bloody American war in Vietnam. Scenes from the Civil Rights Movement scared them, too. They wondered if the American descendants of African slaves could succeed in fighting for the same rights that white Americans have.

One piece of good news finally got us out of New Jersey. In 1965, the U.S. government cancelled racist immigration quotas that invited Western Europeans to immigrate by the millions – while shutting out most people of color. With the quotas gone, immigrants came from to America from all over. In Lower Manhattan, Chinatown filled up with new families. We moved across the Hudson River to join them.

My younger sister and I became part of a historic first major wave of American children born to Asian immigrants. Growing up in the ’70s, most of us had parents who wanted us to study medicine or law. But as much as we loved – and maybe, feared – our Confucian elders, by the ’80s, many of us still pioneered other paths. Mine was journalism.

My 16 years as a full-time journalist was filled with firsts. First Asian American staff writer in nearly every newsroom that hired me. First Asian American columnist at The New York Daily News, a major newspaper in New York City, the media capital of America. Covering news gave me an insider’s view of how America operates. I interviewed everyone – from politicians and celebrities to the neighborhood folks that make New York special. As a columnist, my job was to write about diversity and the immigrant experience.

This was the ’90s. The country was starting to talk a little about diversity and even less about immigrants. I am proud of the stories I did that helped open up a discussion of who we are. Asian Americans struggled with poverty and mental health issues. Mexicans had just arrived in the Big Apple, in search of work. Eastern Europeans told me they felt confused about being called white when they did not feel privileged Western Europeans. Immigrants from Africa and the Caribbean, who usually self-identified by their countries of origin, explored what it meant to be Black.

My job was both exciting and exhausting. While readers showed me so much love, there was also hate mail and threatening phone  calls. My personal life was emotional, too. I was married in an interracial marriage. We lived in Manhattan’s trendy Upper West Side. Everyone there and everywhere had an opinion about our relationship. When the identity issues, stereotyping and career pressures became too much, I shamed my ancestors by going into therapy.

At the time, I believed that therapy was for white people. As the daughter of strong Chinese immigrants, I was supposed to solve my own problems. Suck it up. Be tough. But the talking cure showed me ways to open up. To find myself, I went back to Chinatown for a relaxing Tai Chi class, which led to exploring acupuncture, herbs and Chinese medicine. My husband and I also became parents of a wonderful baby girl.

Today, mixed race Americans and Asian Americans are the nation’s two fastest growing populations. But in the end of the 20th century, families like us were rare. Asian woman + Black man + mixed-race baby girl. We were freaks. Even though we looked upscale and successful, we felt very alone. After 23 years, our marriage fell apart. We got divorced.

I entered the 21st century as a single mom and teacher. I’ve been a part-time professor and instructor at several universities. Today, I teach journalism at NYU, creative writing at The New School, and communication skills at Westchester Community College. I’m also certified to teach English to English Language Learners.

With every semester, the classrooms grow ever more diverse in race, cultures, age, creed, and gender preferences. I love making the one-to-one connection with students. I always talk to them about my own re-invention and identity issues. My goal is to help them examine their own lives and the world around them without judgement.

My classes focus on communication and self-expression. It allows me to get to know my students very well. I share with them as much as they share with me. Together, we connect in our exploration of stories about childhood; what makes us laugh; what scares us; what we love—what we could do today to recover our confidence and reclaim our power and reimagine our communities.

I realized that the methodology of my teaching practice was the culmination of my personal and professional journey. What was happening in the classrooms was so exciting.  In 2017, I took all my skills to training in a new career as a Certified Life Coach. My specialty is coaching issues related to childhood, diversity (DEI), writing, careers, and creativity.

I’m also a former board member of the Museum of Chinese in America and the New York State’s Board of Acupuncture, and, a founding member of the Asian American Journalists Association’s New York Chapter.