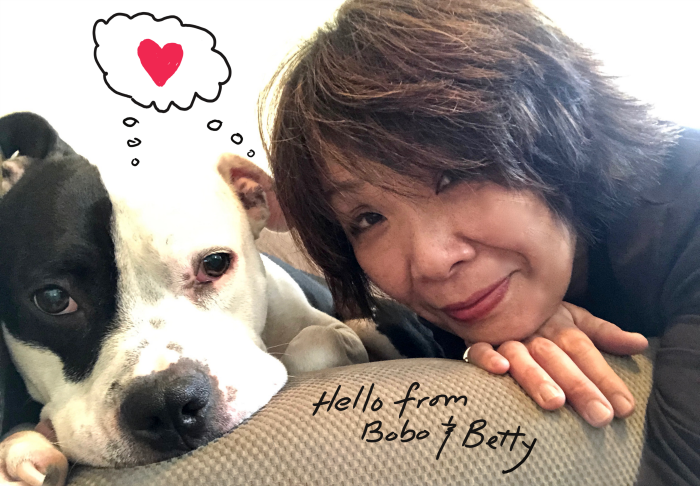 Back in November, I adopted a needy, three-year-old pittie from a rescue group. Poor thing had terrible skin allergies. He thought that going for a walk meant lunging and barking at everything that moved. But when I heard he was good with cats, I took him in — and, found out he was terrible with cats! Even so, I’m celebrating the Year of the Dog with my pit bull.

I call him Bobo, which was fine by him; he never answered to his original name anyway. In Chinese, “bo” means “treasure.” He is a precious gift of unconditional love. The fact that Bobo’s also smart, funny and fun is a bonus. 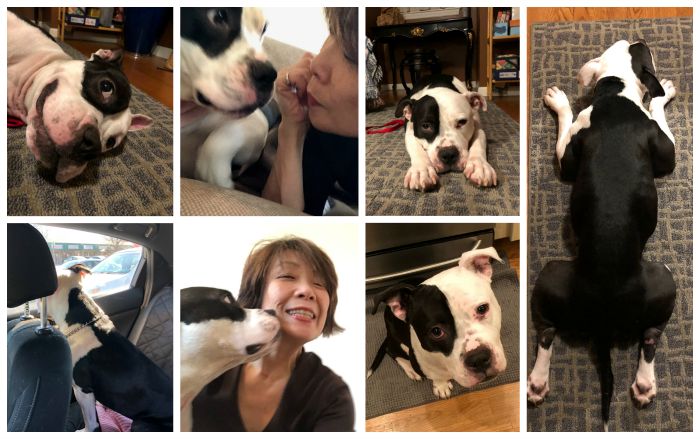 In three months, he’s come such a long way. This sweet dog suffered from emotional and physical neglect. When the rescue folks found him, he was so allergic that he scratched himself into a bloody, raw mess. He had been left alone too much, making him anxious and clueless of basic “good dog” skills.

By the time we met, his coat had grown back in. That left me to deal with the dandruff-y dander and stinky, infected ears. Oh, how he smelled during that first car ride with me, a stranger. It’s actually amazing that we got home without an accident. He was scared and kept hopping between the front and back seats.

Finally, he calmed down as I pet him. “Everything is gonna be okay,” I said. And, I meant it — I could tell we would bond based on what I saw in the rearview mirror. You know the saying about dogs resembling their owners? We were a match, right down to our big heads.

But still, the first two months at Chez Bobo & Betty left us exhausted. When I went out, he howled and slammed himself against the door. As for the cats — well, plenty of pits love their feline family members. Not Bobo. He roared and charged at the kitties. I feared the worst.

Thankfully, the rescue people recommended an amazing dog trainer. We’ve turned the basement into a hiding place for little Isabelle and Minty. When Bobo sees them, he’s learning to ignore them or at least “sit” and “wait” while they pass.

In the kitchen, I emptied some high shelves for the cats. They jump up there to eat in peace, beyond Bobo’s reach. Speaking of food, my new holistic vet has us figuring out Bobo’s allergies by monitoring his diet. The rashes and infections seem to be under control.

What I love about Bobo

My young, adult male dog is 56 lbs. He’s nearly half my weight but 10 times as strong. I’m managing, though, and glad to report our walks are improving. Bobo (mostly) stays quietly by my side without barking. We stop often because people want to pet him. He loves meeting and greeting humans.

Most important of all, he loves me. This is why I’m celebrating the Chinese New Year of the Dog with my pit bull.

What a great companion. When I’m at my desk, he dozes in my daughter’s kiddie rocking chair. During breaks, we throw around his toys. Since he’s learned to sit in the car and wait, we run errands together and go for drives. 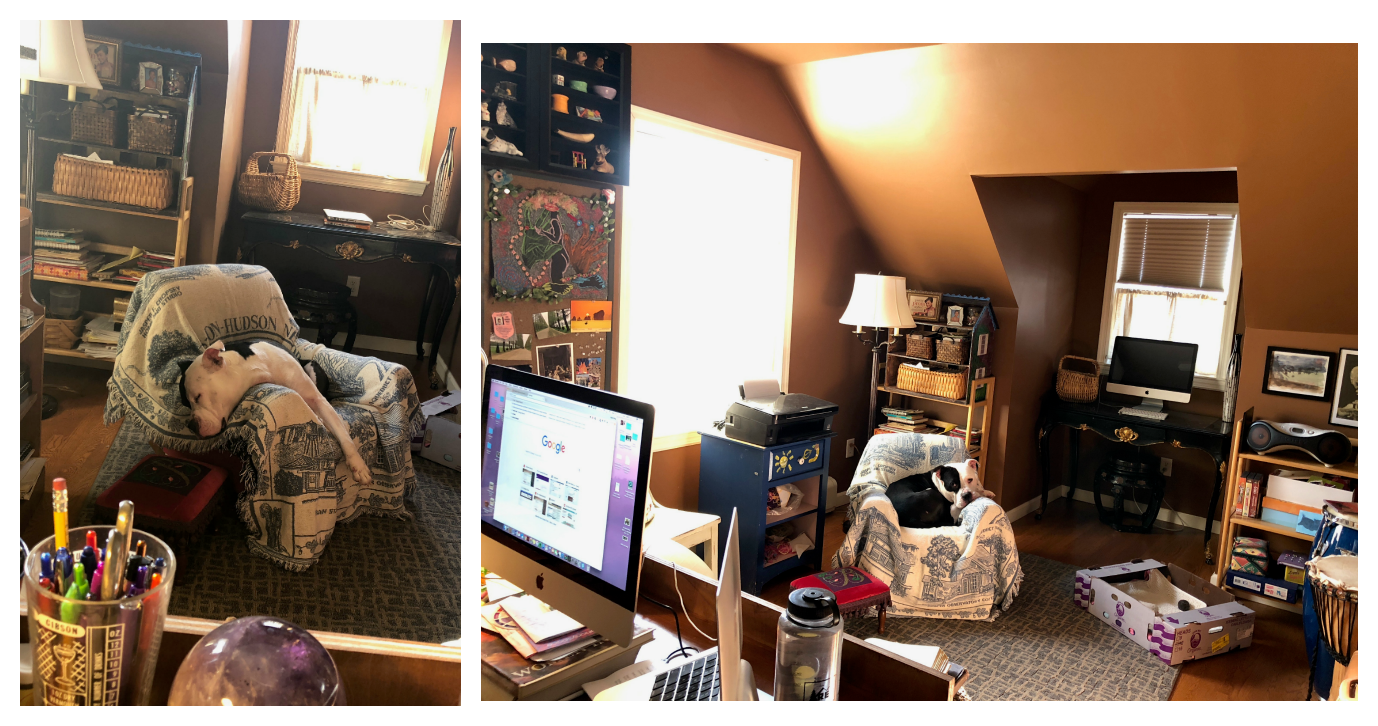 Another delight is Bobo’s fondness for snuggling. Like so many pit owners, I’ve discovered my doggie is a loving mush, a couch potato, a cuddly boy.

Why a pit bull?

A pit bull is not a breed. “Pit bull” refers to a bunch of options, from the American Staffordshire terrier and so-called “bully breeds” like the American bull dog, to any muscular mutt with a blocky head.

This blog post about pit bulls explains how they were once prized as family pets. They had a reputation for gentleness with children. The list of famous pit full owners includes Helen Keller and Mark Twain. A pittie even made it to the White House as Pres. Teddy Roosevelt’s dog, according to the bestselling book, “Pit Bull: The Battle Over An American Icon.”

Then, dog fighting profiled pitties, which is a pity. In the 1850s, poor Irish immigrants popularized these illegal contests, according to the book’s author, Bronwen Dickey. By 2007, the dogs were doomed by the horrifying case of football player Michael Vic: He was arrested for torturing pit bulls he had raised for dog fighting.

After the Vic stories, I vowed to rescue a pit bull someday. I feel proud to join a growing tribe of pit owners — including cops who use them as police dogs.

The Year of the Dog with my pit bull

At the end of the day, me and Bobo look at each other with love, which worries some of my human friends. “I hope this doesn’t mean you’ve given up on men,” they say.

I laugh and tell them, “Bobo is my beau.” After all, we play nicely together. He enjoys my cooking. We adore each other. I like sleeping with him, too. 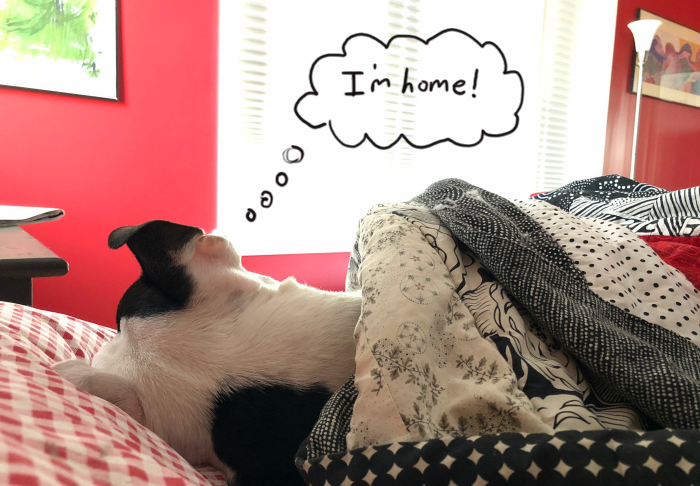 And what about you?

For these reasons and more, I’m thrilled to be celebrating the Year of the Dog with my pit bull.  But of course, the real message of this blog post goes beyond Bobo and rescuing pit bulls.

The point is, opening ourselves up to new experiences creates change. The best changes open us up to unconditional love — love that embraces us with open arms. This love comes free of  judgement or conditions for “good” or “excellent” performance.

We all need unconditional love, which wraps us up in its warm arms, no matter what. No questions asked. Get more of that for yourself today and every day!