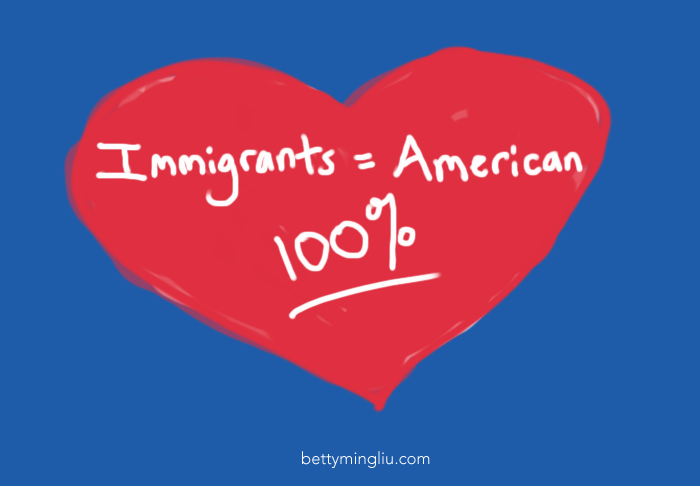 Americans are so confused about what it means to be an immigrant. Really, I can’t take it anymore. That’s why I’m here to say that immigrants are 100% American! We must talk about this — because even immigrants are unsure of their true identity.

The other day, I was in a store and got into a random chat with two customers and a store employee. What happened next made me realize why conversations about being American are so important.

We were such an international group, said one of the customers with a smile. She was from Portugal. The other customer immigrated from Jamaica. My parents were from China and Vietnam. The store employee’s parents came from the Dominican Republic.

The employee added that he was born here, making him first-generation American. This is when I went into high-alert, and started listening very, very carefully.

The woman from Portugal jumped in. Her kids were born here. They’re first-generation American, too, she said proudly.

Okay. By this time, I had enough. They seemed clueless of their power.

For an awkward moment, everyone looked at me. They didn’t understand. Was I speaking a foreign language?

Why immigrants are 100% American

Slowly, I took them through the logic.

I explained that I used to write about immigrants for The New York Daily News. As a journalist, I discovered the correct terminology from researchers, community leaders, government experts, lawyers and scholars — people with power and knowledge on immigrant issues.

My new friends listened doubtfully. So I tried another angle.

“If you make the American-born kids the first generation, then what are the immigrants?” I asked. “Are they zeroes? Are you zeroes, the zero generation?”

The words started sinking in. It was like watching a movie scene where people realized a beautiful, impossible truth. I could imagine their brains sifting through lies and memories.

The woman from Portugal said she had American citizenship. But someone recently told her, “You’re not ‘real’ American. You’ll never be ‘real’ American because you’re not from here.” She said it made her feel so bad.

The difference between 1st- and 2nd generation

“People who say you’re not American are making you the outsider,” I said. “They want you to keep you powerless.”

But first generation immigrants and their American-born children are NOT outsiders. “You have roots in this country, deep roots,” I told her. “Your roots go down TWO generations. Two. Whole. Generations!”

The Portuguese American mom suddenly flashed a huge smile. She said she never thought of it like that. “You just changed my life!” she said.

The American-born son of Dominican immigrants said he felt happy to learn something new about himself. Along with the American from Jamaica, we all  smiled our American smiles. We chatted some more. Then, we went our separate ways, finally sure of why immigrants are 100% American.

Afterwards, I kept thinking about our conversation. America’s immigrants wake up every morning to such crap and abuse. They are constantly coping with the discrimination of “otherness.”

This is where the anti-immigrant crowd brings up the need to keep out criminal immigrants. Well you know what’s criminal? Our lack of clear definitions. What does it mean to be American, anyway?

The dictionary offers a broad answer. “American” means someone born or native to this country. “American” also means living in America and/or having characteristics of this country — this is why immigrants are 100% American.

I just made a nice, clear one-page PDF of definitions for my students. If you’d like, you can also have a copy of my latest handout, “Defining U.S. Immigrants, Diversity & Inclusion.”

The handout might be useful to writers or for your classes, employees and friends. Unlike many immigration vocabulary lists, this one is user-friendly because I’ve “translated” definitions into every-day English.

To get the PDF, leave me your email and hit the “subscribe” button in the sidebar on the right side of your computer screen. Mobile readers, keep scrolling down until you see the button for subscribing to my weekly newsletter.

Meantime, here is the PDF’s text:

How do we define “American”? Americans are a diverse people of different backgrounds and cultures. But we need more than diversity. We need inclusion, which means including everybody.

Defining our status as Americans:

How we got here:

You, and being immigrant and/or American

The whole topic of 1st gen/2nd gen is one of my pet peeves. It has bothered me for years. I used to feel a little silly writing about it. But this was only because I doubted myself.

No more. Now, I realize the issue of rootedness and otherness in America haunts us to our country’s core. Unity begins with understanding who we are.

And what about you? Would love to get your experiences with the words “immigrant” and “American.”