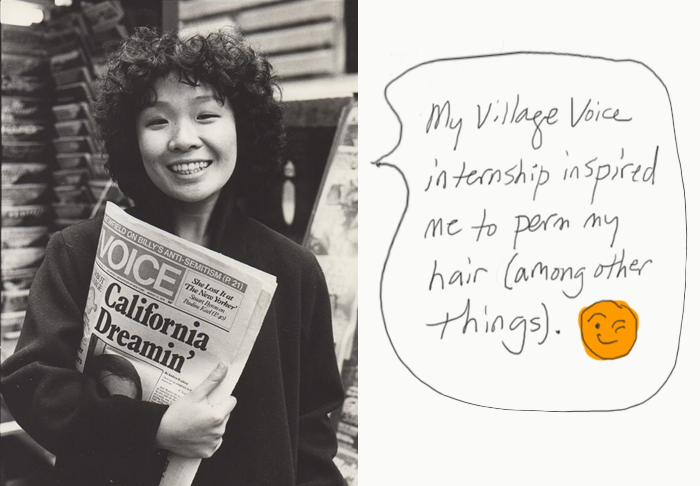 The Village Voice print edition is about to die. This news leaves me nostalgic. In 1978, I was a Voice college intern. When the semester ended, the paper hired me as an office assistant. What an education. I learned about pushing boundaries and self-respect.

At the time, The Voice was making a big, fat fortune in advertising revenue. Those were glory days, when the publication was famous for its edgy, outsider view on art, politics and culture. Each week, the paper hit New York City newsstands with a fresh edition filled with photos and stories about post-punk rage and outrageousness.

Then, there was me. I was a Chinatown church nerd, a born-again virgin. My control freak Chinese immigrant parents aspired to conservative, middle class, middle American values. The Voice operated out of a little building in the Village, at 80 University Place. Going there put me in the center of topics I had been raised to view as secret, sinful and/or shameful. I was thrilled!

In 1979, I left the paper to attend Columbia University’s Graduate School of Journalism. I never wrote for The Voice. Although once, I helped Richard Goldstein research an article he was writing about Charlie Chan. My experience at the Voice wasn’t about writing. It was about finding, well, my own voice as a person.

So I’m here to share about the power of internships for young people. The Village Voice print edition gave me many “first-time” moments — transforming moments with long-term impact. Here’s what happened…

I grew up with an immigrant father who told me that Chinese people don’t become writers in America. No one cared about us. He died of a heart attack before my internship. But his words stayed with me as I finally saw writers up close for the first time.

I had so many “firsts” related to writers. For the first time, I saw that nonconformists are employable. At the weekly editorial meetings, writers showed up in sneakers and T-shirts. Some had long, stringy hair and looked like they hadn’t showered in days. They also yelled and swore at each other. They were allowed to be themselves, and I wanted that. It’s a goal that stays with me to this day.

For the first time, I met actual Asian American writers. Rock journalist Ben Fong-Torres surprised me with his hyphenated last name. The poet/writer Luis Francia was the first Filipino person I ever met. Elaine Louie posed topless (!), in the photo that ran with her first-person piece about dating white guys. They all helped me to believe that I could become a journalist, too. In fact, during the ’80s, I was the first Asian American staff writer at every newspaper that hired me.

Another first: seeing that famous people could be humble and kind. Even though I felt like a nobody, star writers like Wayne Barrett and Nat Hentoff chatted with me as if my opinions mattered, which encouraged me to speak up. I’ve carried this message to my students, urging them to stop feeling inferior in the presence of greatness. We’re all worth something.

Beyond the writers, The Village Voice print edition dropped me into a colorful world. I sat across the aisle from a black man who was the first gay person — and probably also the first black person — I ever talked to. Another co-worker became my first white friend.  My awareness of diversity and inclusion had begun.

For the first time ever, the phrase “art and culture scene” entered my vocabulary. The paper ran pics of ordinary naked people and articles about stuff that didn’t fit my definition for “art.” Karen Finley got a lot of coverage. Her idea of performance art meant getting on stage and sticking cooked yams into her vagina. As a proper immigrant’s daughter, I was properly shocked. And, enlightened.

So sometimes, in my community college public speaking classes, I show fuzzy, old YouTube videos of Finley’s early work. My students are mostly immigrants from everywhere. They watch her curse and say sexually provocative things. Then, I show them an interview where she talks about women’s bodies and sexism. When I explain Finley is now a full-time NYU professor, they’re really shocked that unconventional personal vision can put money and bennies in our pockets.

On a personal note

For the first time ever, I worked city street festivals. As the promotion assistant, I set up booths at weekend street fairs around Manhattan. During the day, I sold Voice T-shirts, gave away pens and handed out free copies of the paper. I learned so much about branding, which has helped me prepare clients and students for job hunting. The wisdom also inspires my own branding as a coach and consultant.

Another first involved animal rescue. When one of my co-workers found some kittens in a garbage can, I took in my first stray. There was soon another cat that I picked up on gritty Orchard Street, long before the Lower East Side turned hipster. Over the years, I’ve shared my home with three more rescue cats and one rescue dog. (Down to just two cats now.)

Lastly, there was love. The Village Voice print edition gave me my first love. He worked downstairs in ad sales. We faced harsh pressure in an era when black-Asian couples were rare. Still, our relationship lasted 24 years. What I learned about interracial marriage, divorce, parenting and family ties — the evolving bond with him enriches my life to this day. Who knew, that a good divorce possible??!

The price of success

The Village Voice print edition is almost dead. Sad, of course. But I see this as a sign of the paper’s success. The Voice was built on a daring business concept: classified personal ads. Each ad consisted of a few lines of text. Maybe something like “white male seeks blah blah for XYZ.” The ad described what the person wanted in sex or romance.

These ads were a gold mine because back then, no respectable newspaper would touch them. They seemed scandalously sleazy. And yet today, a modern version of personal ads is so normal that Review.com just rated the best dating websites — and they go beyond just Match and Tinder.

What does this all mean? Well, The Voice began 62 years ago as an expression of otherness. The paper has been endlessly imitated and copied. What was once edgy is now mainstream. The paper of my internship was sold multiple times. The writers I met are either dead, fired or working elsewhere.

This is life. Ubers and Lyfts are replacing taxis. Walmart sells more organic veggies than Whole Foods. A free print version of the paper is only killing more trees. Especially now, when everyone’s reading on their smart phones.

The end of The Village Voice print edition reminds me that change is the ultimate norm. Staying fresh is the key to survival.

Imagine, I learned all this in a college internship. I would go on to many adventures exploring boundaries and breaking cycles. For more on that, check out my three-part life journey blog post, “How Writing Saved My Life.”

And what about you? Did you ever have an internship or early work gig that had a lasting impact, big or small, positive or negative? Reflect on the worth of your own experiences. I hope you’ll share and inspire us. :)