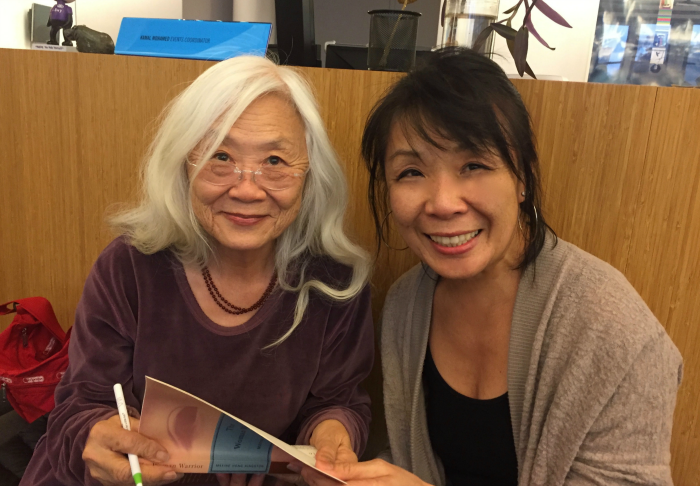 Forty years ago, she wrote “The Woman Warrior: Memoirs of a Girlhood Among Ghosts.” The book was a breakthrough bestseller about growing up in a dysfunctional Chinese immigrant family. Today, it’s an American classic. And now, here I was, actually chatting and getting writing tips from Maxine Hong Kingston.

Maybe you’ve heard of Maxine’s woman warrior. In ancient China, she was a girl who took her father’s place in battle. Sound familiar? In 1976, “The Woman Warrior” hit book stores. In 1998, Disney’s “Mulan” hit movie theaters. Today, kids who grew up on the flick go to college, take courses in creative writing and identity, and hear Maxine’s name — often for the first time.

Maxine was in Manhattan to do a reading for the English department at NYU (April 19, 2017), where I teach food writing in the journalism department. Students and writers in their 20s and 30s packed the room. I felt kinda old, but so what. Being there was a chance to set things right with my past.

“I’ve waited my whole life to meet you,” I said.

“Who are you?” she asked. I babbled about being a journalist, forgetting to say that I’m using her book as research for my certification as a life coach.

I also said something like this: “I read your book when I was 20. My reaction was, ‘How dare you, Maxine. How dare you tell our secrets and make us look bad.’ But reading it now, it’s making me cry, because I get it! Your writing is so raw and that’s just beautiful.”

Maxine, who is in her mid-70s, held my hand as we talked. She graciously signed my new copy of “The Woman Warrior,” published by Vintage International, a division of Random House. (Years ago, I’d thrown out my decades-old copy in frustration.) Then, the panel discussion started, offering me all sorts of writing tips from Maxine Hong Kingston.

1) Find power in the first-person voice

Maxine used the “I” voice for telling the  woman warrior’s story. In the book, the warrior goes by Fa Mu Lan, which Disney movie people whitewashed and shortened to Mulan. Maxine said that when she wrote about Fa Mu Lan in the first person, ” I take on those powers and abilities.”

This is what Maxine feels and sounds like, when she’s the warrior: “After I returned from my survival test, the two old people trained me in dragon ways, which took another eight years. Copying the tigers, their stalking kill and their anger, had been a wild, bloodthirsty joy. Tigers are easy to find, but I needed adult wisdom to know tigers.”

2) Believe in your story

Maxine’s book established her as the first big-name Asian American writer. She rewrote her memoir at least 15 times, from beginning to end — every single time. If no one published it, she planned to xerox the manuscript and save it. Maybe someone would discover it 1,000 years from now, she told us.

After the book’s success, Maxine fussed. “I’ve had time to think about it, criticize it and be disappointed in it,” she said. But then, she found a way to let go. “So, the way to make corrections is to write the next story,” she said. Maxine went on to author seven more books.

Has her audience changed much over the decades? What is her writing process? What about the question of white approval? We wanted to know. “I try not to think about an audience because I want to go deep inside myself,” she said. This is the only way for any of us to find our truth.

Maxine is often held up as a creative writing standard, especially for writers of color. When we don’t write like Maxine, some of us feel inadequate. She said she knows that sometimes, her book is “a block and obstacle held up to young writers.”

In answer, she shared “a solution” she heard from another writer, Gish Jen. Gish is a 60-ish bestselling author and also a daughter of Chinese immigrants. Maxine said that in order for Gish to write in her own voice, Gish “has to “kill Maxine Hong Kingston. So that’s what you have to do.”

6) Honor a code of ethics

The storytellers in the room wondered about boundaries. Can you tell family secrets? What if people get mad? Maxine said that sometimes, she’ll write about a secret “but I don’t have to publish it.”

In recent years, she’s been showing what she’s written to the people she writes about. If she’s gotten it wrong, their corrections “make it better,” she said. And if they don’t want her to publish, “that’s okay, too.”

These days, Maxine says she’s focusing on “posthumous work” — stuff the world will only see after she dies. “I’m writing whatever I want with the feeling that it won’t be published,” she said.

After sharing that final thought, the panel discussion ended. Maxine blew out the candles on a cake while we sang happy birthday to “The Woman Warrior.” 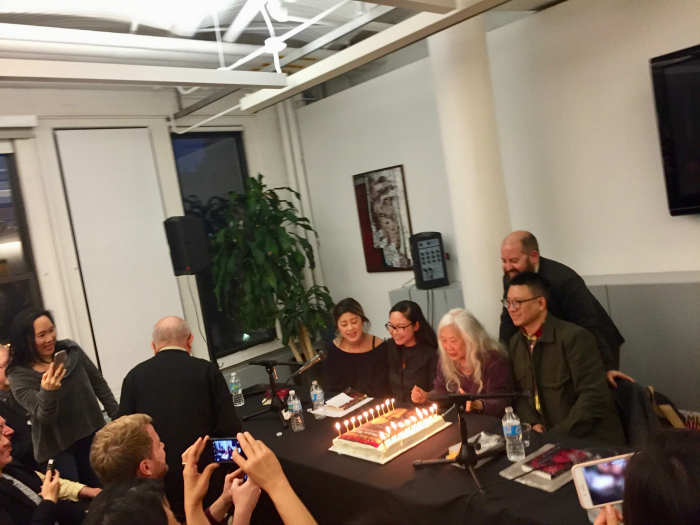 She signed more books. I got on line with all the young folks and bought another copy. Maxine remembered my name. I didn’t have to tell it to her.

It feels good to have family. And speaking of family, many thanks to NYU and Asian American Writers Workshop for hosting such a lovely event. :) 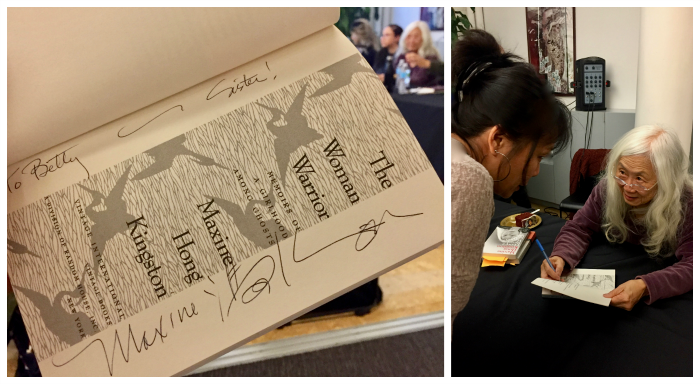 Your reax to Maxine’s tips

These are just some of my favorite moments from the evening. I vibe most with #3 and #4 because after a lifetime of doubting myself, I’m finally writing for me. Would love to hear what you think of these writing tips from Maxine Hong Kingston. Which tips speak to you?