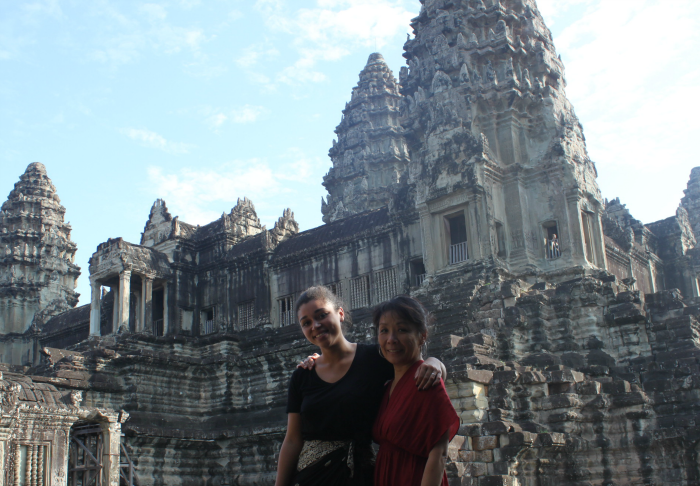 Cambodia is a tiny country with incredible ancient ruins, brutal politics and really good food. Visiting here taught me so much about being human — and having hope.

I went into this poor nation of 15 million people totally ignorant of its history. Turns out it consistently ranks on top-10 tourism lists for its huge, sprawling temples that date back 900 years.

These engineering and architectural wonders were built by the Khmer, the ethnic group of most Cambodians. Through history, they’ve been outnumbered and bullied by other countries. As they fell, they abandoned their temples to the jungle.

The most famous one is Angkor Wat. My daughter Gabi and I were there at 5:30 a.m. to catch the sun rising behind it. Angkor, along with other precious temples, are now protected and undergoing restoration as UNESCO World Heritage sites. 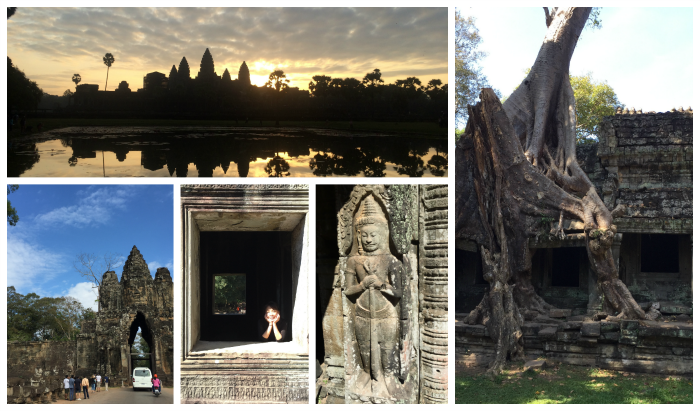 More than 400 of Cambodia’s estimated 2,000 temples are in the gracious city of Siem Reap, which we truly enjoyed. This is where we learned to say “hello” and “thank you” with sampeah prayer hands. A sweet hotel and a 40-kilometer speed limit (25 miles per hour) added to the mellow vibe.

And the food! We feasted on amok — baked freshwater fish from the Mekong River made with coconut, lemongrass and chili and served on a banana leaf. Cambodians love their rice. We ate it with everything and in every form (noodles, porridge, cakes). I grew fond of coconut smoothies, too.

While it’s possible to go high-end in Cambodia with $700 luxury accommodations and dinners at New York City prices, we paid $35 a night for our room. Our meals ranged from barely $3 for street food to $20 apiece for dinner (including booze and dessert). 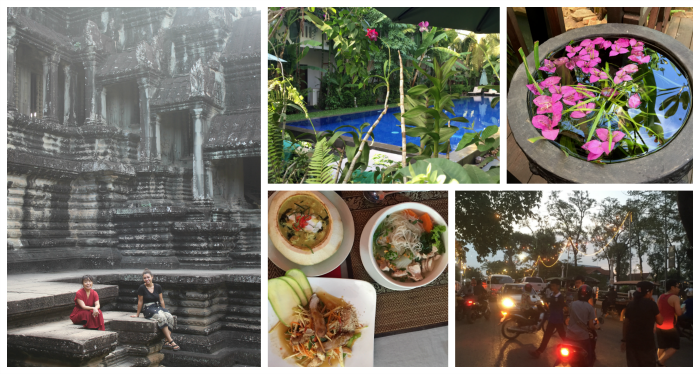 Then, from the pleasures of Siem Reap, we went to the killing fields.

Cambodia’s dusty, dirty capitol city of Phnom Penh is all about new construction of tall office buildings and hotels. Deals between foreign investors and Cambodian officials eager to line their own pockets is worrisome.

Still, the future has to be better than the more recent past: a century of French colonization (1863-1953); Thai and Vietnamese domination; Japanese occupation (World War II); bombing by the U.S. (Vietnam-American War).

Having hope is essential, especially after we visited S-21, Phnom Penh’s major tourist attraction. This former school building-turned-torture chamber was opened in 1975 by the China-backed Khmer Rouge. Its leader, Pol Pot, who was half-Chinese, stayed in power until 1979.

The classrooms of what is now the Tuol Sleng Genocide Museum are filled with graphic photos, decades-old blood splatters and rusty farm tools used to mutilate victims. After this soul-wrenching tour, we drove out to the the actual killing fields of Choeung Ek.

We saw the remains of 8,985 victims — including the bones of babies. They are among the estimated 2 million lives lost back then to atrocities, starvation and mass suffering. The killing fields feel peaceful today, with the skulls and bones categorized and stored in stupas, which are Buddhist shrines.

After touring the bitterness and beauty of Cambodia, Gabi and I stuck around to celebrate New Year’s Eve in Phnom Penh. We had a fabulous dinner in a crowded city filled with partying tourists and young locals born after the tragic decades. It was a night of hope in a four-day trip we’ll always remember.