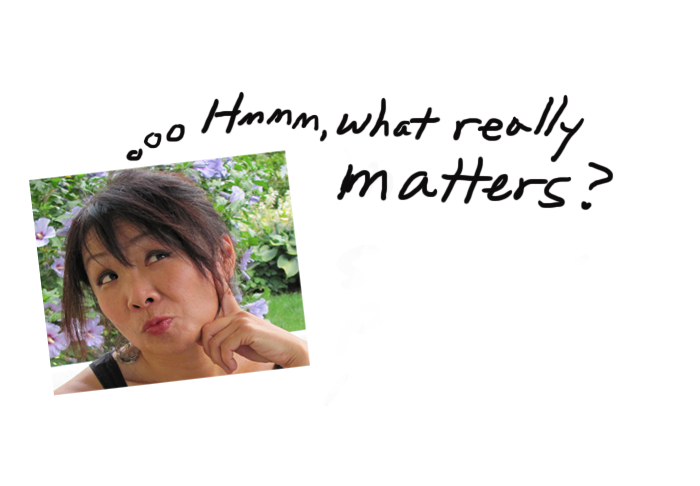 Note: This is Part 3 and the final installment in my series. Part 3, with three key words: writing-saved-life.

During my 30s, I played The Asian Babe Who Had It All. There was a hot journalism career and cool husband. We owned a Manhattan condo with marble bathrooms and a fireplace. By day, I ran all over the city, writing about immigrants. At night, I threw on a cocktail dress and hopped into stretch limos, playing corporate wife at my honey’s business dinners.

This was the early ’90s. The Chinatown nerd, oppressed by control freak immigrant parents, had escaped her past. Or, so I thought. When my American Dream finally fell apart, I fell hard. Really hard. It would take another decade for me to start recovering. But thankfully, it’s never too late to Become My Own Woman.

Back then, I loved being a columnist for The New York Daily News, the country’s sassiest, large-circulation newspaper. Meanwhile, my husband focused on climbing the power ladder as a Black executive in white America. Back then, at the turn of the last century, Black-Asian couples like us were rare.

The statement we made went beyond race. Clearly, we had very different passions. One of the people who noticed was our neighbor, Alec Baldwin. Yeah, that Alec Baldwin. Like us, he was youngish then. Three 30-somethings, on our way up in the world.

I’ll always remember the morning we ran into him near the mailboxes in our marble lobby. We were heading to work. Alec, T-shirt casual with bedhead, looked like he just woke up.

“Stop,” Alec commanded as he stared hard. He looked us over, head to toe, up and down, slowly evaluating every physical detail.

After a pause, Alec nodded in approval. Then he said something like, “You’re both sooooo in character! I totally get it!”

For the next few years, life stayed on script.

The beginning of the end

We were inner-city kids who craved success. Our best energy went into career-building instead of the relationship. Stress and exhaustion had us bickering about everything, from dinner reservations to investment decisions. The past caught up with me as we turned into a version of my parents.

I tried pretending that we were fine. Being strong meant riding out problems, right? Showing fear would admit defeat. But once I broke down and confided in close friends, they pushed me to seek help.

A Chinatown pal introduced me to his Chinese medicine master.  Exploring acupuncture, tai chi meditation and boiling Chinese herbs blew my mind. I embraced a healthy side of my heritage that has made me whole, body and soul.

But therapy felt taboo because I was opening up to a stranger, a white woman. In time, I understood we all need unconditional love and healing, with endless variations on the theme. Her wisdom and warmth did wonders.

Change felt awkward. Speaking clearly and calmly to my spouse felt like being an actor. Still, we moved forward, sort of.

For a fresh start, Mr. & Mrs. Blasian left the city for the northern suburbs. We also succumbed to retail therapy and traded our condo for a house that was 7.5 times bigger. We paid a price, emotionally. Between commuting to work and intense newsroom politics, I burned out. Finally, when Baby Girl came into our lives, I gladly quit work to do the mommy thing.

But as much as I loved snuggling with our daughter, full-time motherhood, I was in culture shock. Middle-of-the-night bottle feedings left me exhausted. On top of my new unpaid gig as Family Nurturer, living in the moneyed white ‘burbs had me in culture shock.

When I took the stroller into town, people assumed I was the Asian nanny of a multiracial baby. Once, a Federal Express truck pulled into our driveway as my husband mowed the lawn. The driver called out, one Black man to another: “Yo, my man, are you allowed to sign for this?” What a lonely reality.

Before the baby, chasing our careers already had us on separate journeys. Now, the contrasts and conflicts escalated. He relaxed by jumping into the Mercedes to hit some balls on the tennis court or golf course. I turned to decorating. Our home exploded in colorful, hand-painted faux-finished walls. I hand-painted furniture and sewed quilts. I made everything, including our ceramic dinner plates and Victorian silk lampshades.

Then, just as the house threatened to swallow me up in fabric swatches, writing saved my life. Again.

My right to write

At 40, I enrolled in my first-ever creative writing workshop. A novel poured out as I typed late into the night. It was a way to avoid sleeping on opposite edges of a king-sized marital bed and deny that we were in a failing marriage. And there I was, once again, haunted by my childhood: My parents used to sleep in separate bedrooms.

Speaking of haunting, my novel had a plot that fascinated the shrink: A single, Chinese American newspaperwoman solves a murder mystery while a sexy ghost from ancient China stalks her. My therapist wondered why the heroine never slept with the ghost or any man. What’s up with that?

By the time I typed “The End,” I had an answer. After a few agents gently rejected my manuscript, it was time to move on. I had written my way out of the marriage.

Divorce & the terror of being alone

At the dawn of the millennium, we split up. Our 21st century divorce was quite civil but still absolutely, utterly wrenching. Our daughter was barely four years old. I moved her with me, to a town just outside the city. Walking and breathing hurt every single day.

Sometimes, I think I stayed married for fear of going solo. After the divorce, I was terrified on the weekends when my daughter saw her dad and I was stuck rattling around the empty house. With no other choice, I faced the horror — and began unlearning a lifetime of crap.

For all my career talk, in my heart, I was raised to believe that women nurtured and served the family. That only selfish women did things for themselves. That single women were losers. Letting go of these values taught me to be my own best friend. 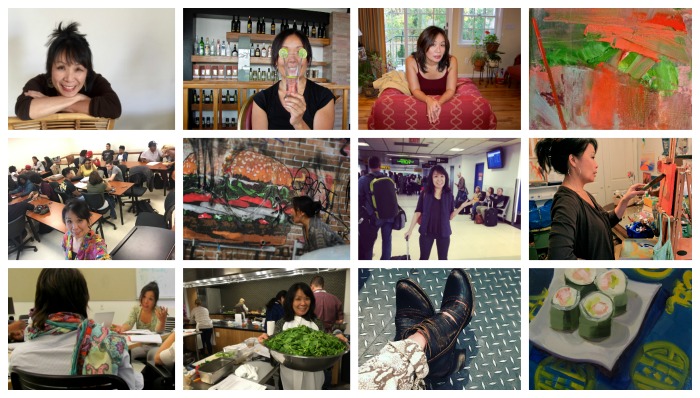 5 ways to start over

#1 — Dating got me outta the house. As if I wasn’t in enough pain, the shrink told me to start dating. She said it was the only way to break the cycle of my parents, who made me responsible for their happiness. By dating, I’d take that kind of pressure off my daughter. Plus, I had only two long-term experiences with men — my controlling father, who died when I was 19, and my husband who I’d been with for nearly 24 years.

I’ve mostly dated online. Meet-and-greets over drinks or coffee led to a few boyfriends and flings. Each one brought me closer to resolving poor self-esteem. With a dad who cheated on my mom, some of the guys I picked were cheaters, too. Making progress on the romance front can hurt, but getting out teaches me about myself.

#2 — Falling in love with myself was the answer. Finding guys with common interests can be hard. But I’ve met someone who really vibes with me. No, it’s not a guy. It’s Little Betty! I’m giving her the fun stuff she missed as a kid. Together, we’ve learned to salsa, oil paint, watercolor and play the drums. We also took cooking classes, which added Thai, Indian, vegan and gluten-free recipes to our menu. Lately, we’ve discovered nature walks.

#3 — Finding community feels good. Once my daughter started kindergarten, we met everybody in our new town. We developed a routine with playdates, Brownie meetings and other after-school activities. I stepped up my volunteering. To avoid being totally kid-centric, I continued my volunteer work on the board of the Museum of Chinese in America. When the New York State acupuncture board invited me serve as a trustee, I say “yes.” Lately, I’ve been involved with Moms Demand Action, a group that fights for sane gun control laws. Campaigning for Hillary Clinton this fall makes me want to stay politically involved.

#4 — Meaningful work matters. In 2004, I sent my resume to NYU on a whim. Lucky for me, I was hired as a part-time assistant journalism professor. College students are a trip! The first semester, a steep learning curve wore me out. But I loved the classroom and kept adding various gigs at The New School, St. John’s University, Baruch College, Sarah Lawrence College and Westchester Community College. These days, I teach creative writing, public speaking, communications and journalism.

#5 — Writing works magic. Trying to stay ahead of the young folks reunited me with more ways for writing to save my life. In 2009, I launched BettyMingLiu.com because I wanted to improve my classroom blogging and social media skills. I was surprised when the blog morphed into a mini-me. I actually enjoyed posting about my life, recipes, writing tips and reflections about tough love immigrant parents. In 2010, blogging about my 92-year-old mom’s death brought me peace.

Then in 2011, I realized people really read my blog. The aha! moment came with my rant about an annoying new book, “The Battle Hymn of the Tiger Mom.” Author Amy Chua, the false prophet of false profit, glorified the control freakish parenting that I hated. The media went berserk over my post, with reporters bombarding me with interview requests. That was kind of fun.

The more I blogged, the more I sorted through feelings and discovered pieces of myself. There’s a million more things to say but this is plenty for now.

I guess the only thought to add is this: There’s a magic space that opens up between me and my words. This is where the loving happens, where anything can happen.

So that’s it! We’ve gone from Part 1 (childhood trauma) to Part 2 (losing my virginity and finding my journalistic self) to this final installment in the series. What about you? In what ways are you giving yourself safe spaces and unconditional love?