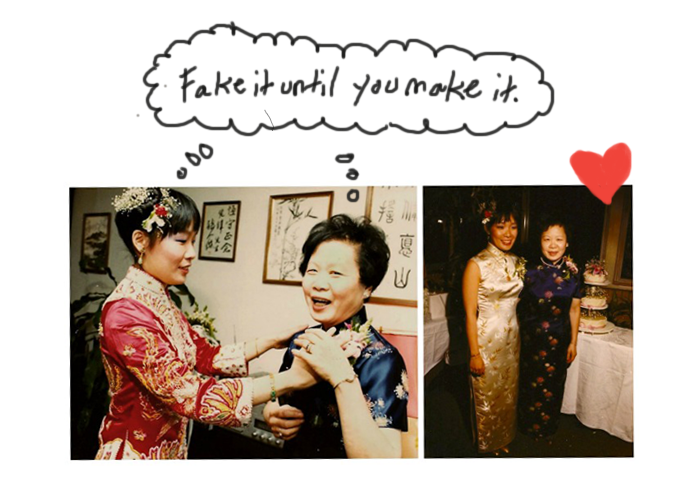 Note: Welcome to Part 2 in my 3-part series about how writing saved my life.

My father’s fatal heart attack brought a weird peace to our Chinatown apartment. Yet, the tough-love patriarch still lived on in my head. I was 19, and clueless about making my own choices. Eventually, I found my path. But in that moment, there was only one thing to do.

I decided to become an accountant.

My Dad’s accounting office was a ghetto Chinatown storefront — a few desks on the ground floor of a creaky tenement building. Mom took over day-to-day duties. Unfortunately, I also had a new role.

Once again, my kid sister escaped family pressure because she was the second of two daughters. As the first-born, I was crowned the Fake No. 1 Son. It was time for me to man up. Dad’s death meant I had to sacrifice my selfish little dreams and serve the family.

So I transferred to Baruch College, City’s University’s famous business school. Even though my father was no longer around to bully me into taking math and science classes, he had trained me well. I piled on the accounting classes that recreated the familiar feelings of drowning academically. Once again, history repeated itself: Cs and Ds piled up fast.

In desperation, I took a journalism course to boost my grades. I learned that journalists got paid to ask nosy questions and write stories. An interesting concept for a girl raised to be seen and not heard. That first journalism class led to another. Then, another. The As started rolling in.

The right to write

During senior year, I interned at The Village Voice, America’s legendary, alternative weekly. The paper operated from a Greenwich Village outpost barely a mile north of Chinatown. But culturally, I was a world away. Interning there for a semester showed me new options for feeling, thinking and being a young woman.

The in-your-face newspaper was all about social change. Its pages celebrated profanity, nudity, sex, drugs, post-punk music and crazy, experimental art. Back then, the paper also made news with exposés about evil landlords and political corruption.

I walked into the Voice a nervous virgin, dedicated to my local Chinese church. How was I supposed to act around people who fit my definition of “sin”?

With fascination, I attended editorial meetings where the writers openly argued and cursed each other. I made my first white friend and had my first conversations ever with people who were openly gay. Then, I really crossed the line by falling into lust and love.

He was a fellow intern. Tall, handsome and Black. Mom, who was too busy running Dad’s business to monitor me, knew something was up. I took to staying out all night as I explored New York City with my boyfriend. For the first time, I tried sushi, clubbing and miniskirts. And, sex.

Growing up in a non-kissy, non-touchy household had me starved for affection. The romance put me at odds with everything I knew. Pre-marital sex and Black-Asian interracial dating were no-nos in Chinese Christian circles — even dating white guys would’ve made me a disgrace. So, I quit the church.

When the internship ended, the Voice offered me a secretarial job. Great — I could stay in the new world for more adventures and get paid for it. My sense of confidence began to grow.

Then, the truly unexpected happened. My journalism professor pushed me to apply for Columbia University’s famous Graduate School of Journalism. Was she insane?

My professor assured me that anything could happen. She would help by writing a fantastic recommendation. My job, she told me, was to turn in a “killer” essay that addressed my poor grades and the struggle of the immigrant experience.

I actually was accepted into the J-School’s Class of 1980. I wish I could say it was a happily-ever-after experience. But I suffered from Imposter Syndrome and felt like a misfit in Columbia’s elitist classrooms. Mom, though, was thrilled by my Ivy League diploma. The prestige comforted her when me and the boyfriend took the next step in our relationship.

Breaking into the mainstream

In the early ’80s, interracial marriage to white guys was still so rare that some Asian parents disowned their daughters. That meant bringing home a Black guy had me ostracized. When I went Blasian (black-Asian), most of my relatives turned their backs. So did many friends. My boyfriend/fiancé got grief from his people, too.

His father and my mother both objected to the marriage.

“Good thing Daddy is dead because you would’ve killed him,” my mother said.

To avoid an ugly scene, we limited the wedding guests to only siblings, parents and a few dozen close friends. It was 1983 and we were breaking color barriers. I’m happy to report that everyone behaved.

Young and broke, we skipped the honeymoon. I moved into my husband’s studio apartment on the Upper West Side, a racially-mixed section of  Manhattan. While he climbed the corporate ladder, I focused on a journalism career where I was the first Asian American staffer at every paper that hired me.

First stop: The Hudson Dispatch, a now-defunct New Jersey daily, where I covered the crime beat. “Here comes Yoko Ono,” the cops would say when I showed up. Curious co-workers would ask, “What’s Chinatown like?” Or, “Can you recommend a good Chinese restaurant?” When the paper hired another female Asian American reporter, people sometimes mixed us up, which really pissed me off.

It would be decades before I heard the word “microaggression.” Back then, I just ignored the racial awkwardness and fed off the adrenalin rush of news reporting. I look back at this time with mixed emotions and quite a lot of fondness. After all, working in the prehistoric, pre-Internet 1980s, gave me mad, old-school writing skills.

Writing saved my life — and career

You could send me out to cover a city council meeting, two-alarm fire — anything — and I would deliver a polished story in an hour or less. I did it all by hand: from frantic note scribbling to on-the-spot outlining. Next, I’d call the newsroom collect from a pay phone or landline. Speaking clearly and slowly, I would dictate an entire story, including quotes.

Within a year, I moved on to The Star-Ledger, New Jersey’s largest daily. Then, Crain’s New York Business got me back to the city. One day, some guy called claiming to be The New York Daily News’ business editor. I thought it was a joke — until he said he read my articles and offered me a job. No more underachieving for me.

My hometown paper was among the country’s top circulation dailies. The News was also Superman’s newspaper, serving as the model for Clark Kent’s Daily Planet. The News’ tough-talking, street-smart reporters ran in a macho, white boys’ club. While most of the guys were nice to me, being the paper’s first Asian American staff reporter was lonely.

But all around the country, women and other young journalists of color were in a similar dance with mainstream media. Our numbers kept growing in a profession dominated by straight, Anglo, middle-aged men. In 1987, within a year of landing the News gig, a group of us founded the New York Chapter of the Asian American Journalists Association (AAJA). I could tell a million stories about those days. Suffiice to say, we started shaking up the status quo.

I loved the News. Being at a larger-than-life tabloid taught me to write big, bold and brash. I covered business and did some food writing and book reviewing. Meanwhile, I was promoted to covering celebrities and entertainment. This might not sound like much to brag about. But it was my revenge-of-the-nerds moment.

The night I met Prince was the coolest moment of my life. Cher, Grace Jones, Robert Downey Jr., Bill Clinton — I met them all. It took me more than a year but I landed John F. Kennedy Jr.’s first-ever interview. Back then, an egotistical real estate developer named Donald Trump used to call me “Betty Lou.” I hated interviewing him about his latest outrageous fake news story. (I could say more, but this blog post is about me, and not him.)

Those were crazy, exciting times in the media. By the early ’90s, my career profile kept growing and growing until I landed my own column. This was huge news in Asian American journalism circles. Since no one cared about immigrants back then, my column would give the community a voice.

The girl who was raised to stay quiet was getting paid to have an opinion in public, in print. Now, I really had be my own woman.

I ranted about U.S. policy that turned away dark-complexioned Haitian boat people.  My mother was mortified when I wrote about Chinese restaurants paying their workers slave wages. Sometimes, I fought my editors too. It took forever to convince them that it was worth reporting on the tiny community of Mexicans that had started coming to the Big Apple.

Readers reacted. The occasional moron called with threats to do me bodily harm. I got hate mail and fan mail, speaking engagements and requests for TV appearances. My column was nationally syndicated, which meant other newspapers paid the News for the right to run it in their pages. In other words, I was a hit.

Making peace with the past

When I was a kid, my Dad forbid me from taking English classes. He said I could never make a living as a writer, and that no one cared about what I had to say. I wish he had lived long enough to see me succeed. Well, at least my 70-something mom was around to celebrate in her own special way.

“Are you good enough to apply for a job at The New York Times?” she kept asking.

This was the early ’90s, just as she was about to retire. In a final vindication of my career choice, she sold the family accounting business for either $60,000 or $70,000. I can’t remember the exact amount because to this day, I have a mental block about the price tag.

Here’s why: Whatever my dad’s business sold for, it was EXACTLY the same as my annual salary! Imagine — in one year, I made as much as the entire family business was worth.

Wow. My parents gave their lives to that Chinatown storefront. They dangled it as my inheritance, the ultimate financial reward. They tortured me, for what?

I had found success doing the very thing they saw as a path for failure.

The life lesson was obvious. Being my own person means juggling the expectations of both the old and new country. They were brave. And, I was brave, in different ways.

The journey ahead looked clear now, and clearly exciting. Or, so I thought. In truth, I was a hot mess of denial.

Ready for more about how writing saved my life? Tomorrow wraps up with Part 3  the personal crash. Then, recovery and self-discovery. There’s also Part 1, about childhood trauma. Can you relate? Would love to hear your thoughts. xo