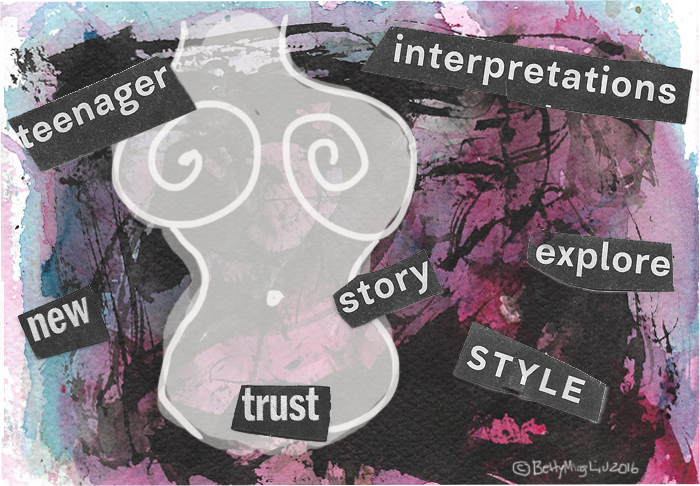 My friend emailed me, desperate. Her first-born child, 13, stormed off to school in short-shorts and a teeny tank top. This, after a huge mother-daughter fight over inappropriate clothes. My friend wanted advice. I was stumped. But when I turned to Facebook friends for help, they responded with inspiring insights that I wish were available when my own daughter was young.

Somehow, the two of us muddled through the what-to-wear rite of passage. While my daughter is way past the issues we’re about to throw on the table, she’s still in college. Maybe we’re still too close to that stage of life to talk about it from a safe distance; when we brainstormed about my friend’s situation, neither of us could think of what to tell her.

This is where Facebook friends stepped up and stepped in. What follows are reflections from a crowd that is solidly in their mid-20s and beyond — mostly former students and middle-aged gal pals. (I’ve left out full names and, in some cases, any sort of identifiers at their request.)

The clothing issue marks a teen’s first scream of budding independence. She also might be budding boobs along with the blossoming of her entire body and being. How we do or don’t communicate can really mess up our children. Plus, damage done to a fragile mother-daughter relationship might take years to repair.

Until my desperate friend read the comments below, her web searches only led to results advising her to talk to her daughter. Except, she added, “they don’t say what to say.” She was tempted to tell her baby girl that “she looks like a slut but I know that is 100% wrong.”

What teenage girls are thinking

I used to believe teen girls dressed to impress the boys. But girls actually dress for other girls, noted Karen, a mom with a grown daughter. For more on this topic, she recommends the teen girl chapter in “Bitch.” The book is authored by the annoyingly self-involved Elizabeth Wurtzel, who actually proves useful in this instance.

“She talks about how the girls are dressing primarily to impress each other,” Karen explained, “without any real grip (or concrete intentions) on the responses of men who will take it as encouragement or the judgements that will be directed toward them.”

So when D.’s teen daughter went to school a few years ago in short-shorts, she announced that “everyone dresses like this.” At first, D. was skeptical but then saw that this statement was pretty much true. Her daughter also asked D. to look back at her own youth, comparing the situation to D.’s own mom vetoing miniskirts when they initially came out.

“It was the first time she asserted herself,” said D. of her daughter, who is now 16. “I let it go and decided it’s for our generation to ‘get with it’ and see it for what it is: fashion. No more, no less. And no one wants to be square. ”

What’s a mother to do? It helps to remember that smart, young women become self-aware. One of my former students, now 28, recalled being at her job when “one of my teenage research participants walked into a session wearing a skin-tight crop top and tights (my internal reaction was OMG your parents let you out of the house like that?!?”).”

But even though she her views on appropriate attire have changed, “my mom and I have struggled for a long time to communicate beyond disagreements. In the past, our mother/daughter relationship has involved her saying something about my life choices, me reacting negatively, and ensuing escalations.” While they now “sometimes are able to calmly explain our different perspectives,” they have to really work at giving each other space to disagree.

What 20+ women think of their teen years

It was so interesting to have my former college students weigh in on this topic. Only one student said her mom enforced a strict dress code and “today I thank her for it. My point is, your mom friend should be stern with her daughter and not allow it and eventually (hopefully) her daughter will understand later.”

But just as interesting is that the other former teenagers, given the chance to experiment, managed to figure things out pretty fast on their own.

Another former student said she was “an ex-jhs skank.” She shopped at what she calls “‘cheap whore stores’ like Joyce Leslie and Wet Seal.” Her mom never stopped her and there were consequences. “I was naive about sex and male attention and dressing provocatively put me in scenarios and brought on comments I was not comfortable with,” she said. “It was socialized out of me very quickly.”

What a daughter needs to hear

Lots of advice from my Fb friends of all ages…

Tonia, who is in her 20s: “Sit her down and tell her about the consequences that would follow if she goes out in public dressed as she is. If she continues or doesn’t listen, then trial and error. She will just have to learn first hand.”

Brandice, in her early 30s: “I’m still wearing short skirts and fighting rape culture while doing it. I’d tell your friend to choose her battles. There should be boundaries, of course, but I’m sure some kind of compromise can be reached. For example: No crop top with a miniskirt. Or if you want to wear the miniskirt, you need to be having an A in Spanish. No biggie. Save her energy for a battle worth fighting for.”

Sheila, in her 50s: “Adolescence is a period of identity experimentation — I wouldn’t worry too much about what she wears. Just ask her good questions: ‘How do you want people to see you?’ ‘Do you think that outfit projects that?’ Presuming the kid is heterosexual, it would be helpful for her to see boys interviewed on what they conclude about girls based on the way they dress.”

Sarah, 29, whose dad immigrated from Iran and allowed her to wear skirts right above the knee, camisoles + cardigans and even low necklines but no short-shorts: “He’s not religious, so he never made me wear a hijab (or even suggested it), but he did instill in me as far back as I can remember that I should ‘cover myself’ and ‘respect’ myself (I can still hear those phrases ringing in my ears).”

Karen, in her 60s, whose daughter was eyeballing provocative clothes at 9, an age when sex and nudity still grossed her out: “I said, ‘in a perfect world, you would be free to wear whatever makes you happy and not care at anyone thinks. Unfortunately in this world, a lot of people will look at the person who wears this outfit and think about having sex with her. They will also think that she put this outfit on because she WANTS them to think about having sex with her. That may not be true, but choosing to wear this outfit means choosing to deal with those people and their stupid thoughts. When you are 18, you can decide you are brave and ready to deal with that attention even if it means you have to keep telling those people to shut up and get lost. It will be your choice to send the message ‘I don’t care if you are thinking about having sex with me–that’s your problem, not mine!’ But you are 9, and it is not a choice I am letting you make.'”

As for my friend, she and her daughter are learning to talk and get beyond playing fashion police vs. fashion victim. But if something crosses the line (no belly button showing, no butt cheeks exposed when bending over), they will discuss.  :)

What about you? If you have any advice, memories or reflections to share, my friend and I would be most grateful.