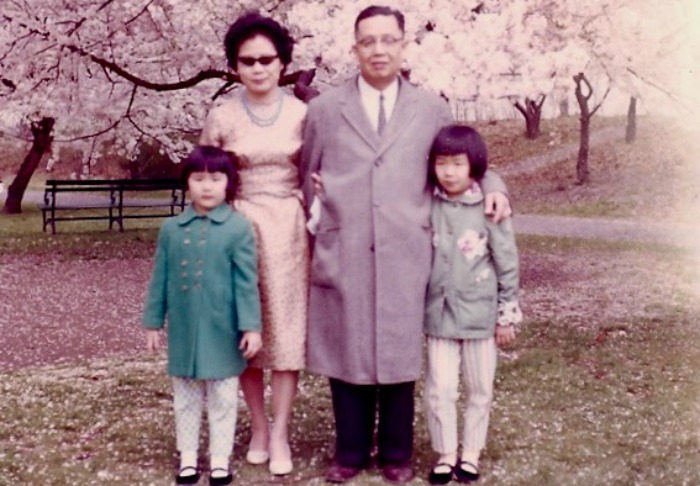 Mothers get blamed for everything. So if you want to know why I turned out this way, just look at my mom. She was a diva in denial who did and said crazy things. Figuring out where she ends and I begin has become my life’s work.

If she hadn’t left this world in 2010, she would’ve been celebrating her 99th birthday right now. But as I recently mentioned on my Facebook, I believe that parents never really die. She will always be my mommy and my muse.

The woman left me great material for talking to both you and, my shrink. Mom also showed how hard it is to be an immigrant in America, even when you survived Hitler’s bombs as a university student in Europe, earned a PhD in chemistry and spoke fluent Mandarin, English and French.

Until her kids came along, my mom struggled alone in this country with no one to truly love her, no one to lean on. All she had was a husband she barely knew and contentious in-laws. In the years since her passing, I’ve come to see just how strong she was and how she suffered.

Of course, she made sure we suffered with her. And as a martyr, she reminded us that she always suffered much more.

Whatever. She found a way to survive in an era of extremely limited options for women and immigrants. My mother was beautiful, brave and quite berserk. Here are some memories of mom. In the end, I wouldn’t trade them for anything.

I wonder what you’ll think of my mother’s teachings. Do you agree with a, b, c, none of the above or all of the above?:

b) “A lady never smiles with her teeth.”

My kid sister and I were born two years apart. Imagine what would happen inside your brain, body and soul if your mom dressed you like this for church. No wonder the inside of my head is such a dark place: 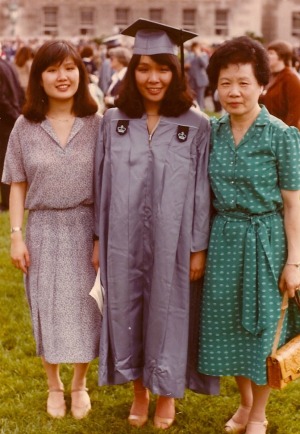 My academic defects stressed my mother out. But when I made it into Stuyvesant High School, she thought for sure I’d excel at this incubator for New York City’s best and brightest science and math kids.

Instead, I flunked chemistry.

I was about to flunk it a second time when the teacher pulled me aside after class. Mr. Schindelheim asked about my parents.

When I said my mom was a chemist, he threw back his head laughed and laughed until he had to wipe his eyeglasses. Then, without another word, he pulled out his record book and penciled in a passing grade.

Much later, all was forgiven by my mother when we took this picture.

My mother viewed marriage as a necessity to be endured. To make the union bearable in our three-bedroom Chinatown co-op, she and Dad each had separate rooms.

Whenever mom showed off our spacious apartment to guests, she lied and told them her husband only slept in the separate bed when he worked late. This was because he was very considerate and didn’t want to disturb her sleep. Do you think people believed her?

Speaking of marriage, mine challenged her comfort level because I happened to pick a partner who was Black. She struggled with her own deep racism, which I explore in my open letter to Chinese American moms. But love prevailed. She and her son-in-law became best friends.

(Note: After our divorce 17 years later, the affection between the two of them endured. At least, until he remarried. Then, she got really mad at him, for a while.)

By the time our daughter came along, I wondered if Mom had evolved enough to accept her. Back then, mixed kids were rare. It wasn’t like now, when multiracial Americans are such a fast-growing population. I worried that my mother would behave poorly.

But once again, Mom surprised me by snatching up our baby girl — and holding her tight until the day she died. “She’s much more beautiful than Chinese babies,” my mother said. (Eye roll here, from me.)

As I celebrate my mother’s birthday, I am proud to be her daughter. She ultimately loved me enough to break through her comfort zones. Isn’t that what true family, community and togetherness are all about?

If my mom could wrap her head around social change, anyone can.

There’s so much tragic news out there, so much hating and stupid, senseless, horrible killing. Everyone complains about how we need more good news, positive stories.

So I’d like to use this space to put more love into the world by sharing your stories.

The more diverse we are, the stronger we are. Whatever your race or background, please share your family stories, any of them, big and small. But especially the ones where love prevailed against cultural, political or familial odds.

I’m tired of talk about how we have to change because it sounds like we’ve sitting around doing nothing. The truth is, we’re already changing! And your stories will prove that we have reason to hope.

Meantime, if your mommy is around, give her a kiss for me. xo