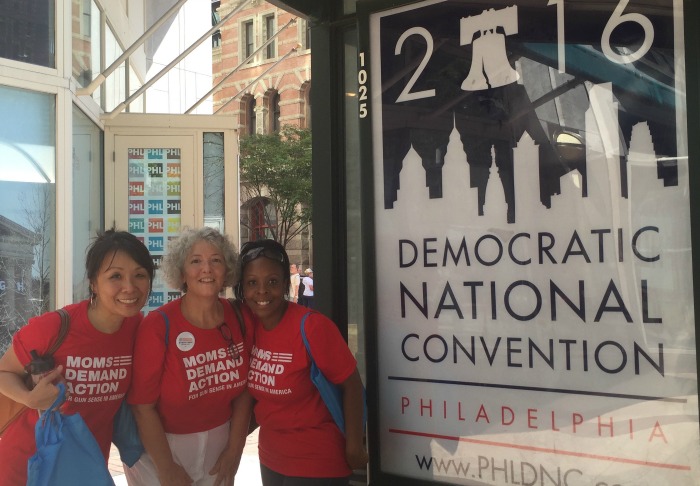 The moms handed me a red T-shirt emblazoned with “Moms Demand Action for Gun Sense in America.” They also gave me a tote bag filled with campaign buttons, including my favorites: “Moms Demand Hillary” and “Buck the NRA.”

From there, I hit the streets for an inspiring experience during the 2016 Democratic Convention in Philadelphia. Between pestering strangers and canvassing with my new mommy buddies, I feel like part of the solution.

We can do this. We can make our country and our world a safer, better place.

In the past, spouting such optimistic clichés would have made me cringe. But that was before getting this first taste of grass-roots political activism. 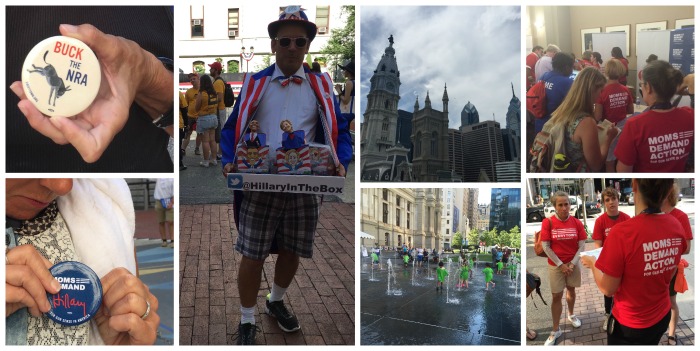 Now, I feel hope — and determination. I’m ready to believe that we can bring common sense to our nation’s troubled gun laws. I also believe we can get Hillary Clinton to the White House and make her the badass mother of us all.

My journey began a few weeks ago with a simple text. It came from the Moms volunteers coordinator in Philly:

Hey Betty! This is Liz Lee with Moms Demand Action. Our volunteers are going to be out in force in Philadelphia during the upcoming DNC spreading the word about voting with gun sense. Are you interested in signing up to cover a shift?

On Day 2 of the convention, I drove from New York to Philly to volunteer from 9-11 a.m. It was the only shift that fit my schedule. It required a 4.5-hour, round-trip commute, which seemed ridiculous. I did it anyway, because it was still easier than telling Liz “no.”

My attitude changed once I found my team and started canvassing near Philadelphia City Hall.

During the four-day DNC, hundreds of us fanned out in our high-visibility red T-shirts. Working in teams of threes and fours, we signed up more than 2,000 voters to join the cause for gun sense.

What a privilege to be on the scene with Tonya Waller and Eleanor Charlton, both from the moms’ Pennsylvania chapter.

Only Tonya, who is a preacher and singer, had prior experience in approaching people and asking them to sign up for the cause. She said being with us was great because our multiracial crew sent a message. Our team “showed diversity and that no matter what happens or where we stand, we can love and support in every aspect of life,” she said.

Eleanor is an emergency room nurse who deals with patients torn up by gunfire. “People do NOT understand the damage that bullets do to the body,” she said. Eleanor answered the call to canvas because “I’ve seen too much not to try and make a difference.”

We spent the 90°+ morning heat wave approaching every manner of passing humanity. Now I understood why the shifts were “only” two hours. Canvassing might be exhilarating but it’s also exhausting. To stop someone and come up with an instantly engaging opening line was like speed dating on steroids.

But the rewards! Tonya met people who talked about loosing loved ones to gun violence. Eleanor shared outrage and grief with a fellow emergency room nurse.

Sometimes, it was enough to start a conversation. One young man took out his wallet and showed me his gun permit but said he wasn’t ready to criticize the National Rifle Association. “Well, at least we’re planting a seed,” I said as the two of us smiled at each other.

Now comes the hard part: sustaining the momentum and building on it until the Nov. 8 presidential election.

During out two-hour shift, Eleanor, Tonya and I probably signed up at least 50 people to join the movement for gun sense. If you’d like to sign up too, here’s what you’ll get.

What is Moms Demand Action

Moms Demand Action is a national organization that is “the NRA’s worst nightmare” according to a 2014 Mother Jones article. It was founded by mom Shannon Watts on Dec. 14, 2012 after a mentally-ill, lone-wolf gunman massacred 20 children at Sandy Hook Elementary School in Newtown, Conn.

Fast forward to June 3, 2016: Moms Demand and Everytown together endorsed Hillary. The groups also called for ballot initiatives to require criminal background checks on gun sales in Maine and Nevada, and a new ballot initiative in Washington.

Hillary responded to the endorsement with a statement. This is her opening paragraph:

Every year, 33,000 Americans die from guns. That’s an average of 90 per day. Countless others are injured. Too many of them are children. They are shot in small towns and in big cities. Sitting in a park with their friends. Riding the bus home from school. Watching TV in their living rooms. Working at their desks. They are our friends, our neighbors, our family.

I joined this group because I remain personally haunted by the Sandy Hook shooting. One of the murdered adults was teacher Anne Marie Murphy. On the morning after the carnage, I became the first and only journalist to interview her parents.

That day, I was a reporter working for a news organization. I had to find them and knock on their door. A tough, awful job, right? But to my surprise, the grieving, sleep-deprived senior citizens invited me in.

The mother held my hand. The father described how federal agents explained that their daughter died trying to shield a group of kids from gunfire. The parents asked if I was hungry and could they make me lunch.

Today, I’m asking you to help me make good on that promise to them and anyone who has lost a loved one to gun violence. Whether you’re a mom or not, you are important. You make a difference. Click HERE for the link to Moms Demand Action where you can join or at least learn more.

And if you have thoughts on any of this, please share a comment. Would love to hear from you.

P.S. — This was my second Moms event. The first was on Mothers’ Day 2015. We walked across the Brooklyn Bridge. Yes, I did a blog post about that too, with pix: “Fight gun violence: Moms Demand Action march.”