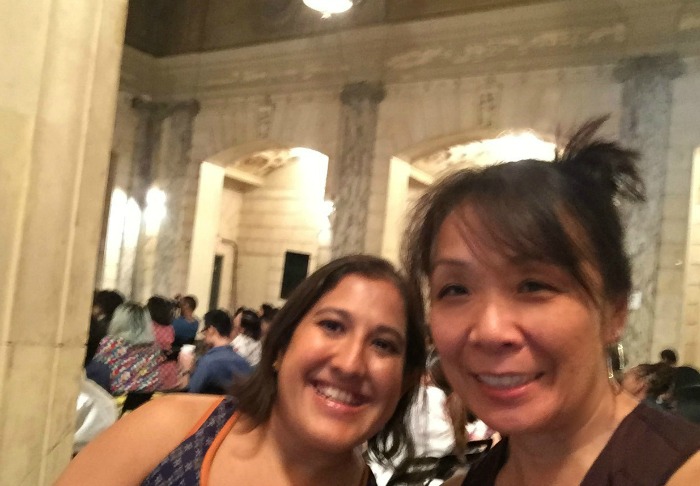 Picture a century-old, Renaissance-revival style meeting hall in downtown Brooklyn, with stately Corinthian columns and vaulted, 40-foot ceilings. Fill it with a youngish, multiracial, multi-gendered crowd. They are novelists, poets and non-fiction writers, plus a sprinkling of editors. Imagine them getting raw and personal in sharing their publishing survival tips.

As the recovering daughter of Chinese immigrant parents who disapproved of my writing tendencies, I was thrilled to be around Asian Americans and writers of every complexion who come from very different backgrounds. Being with this good-looking, mostly-millennial, bookish bunch felt like discovering the long-lost, somewhat hipster branch of my family. 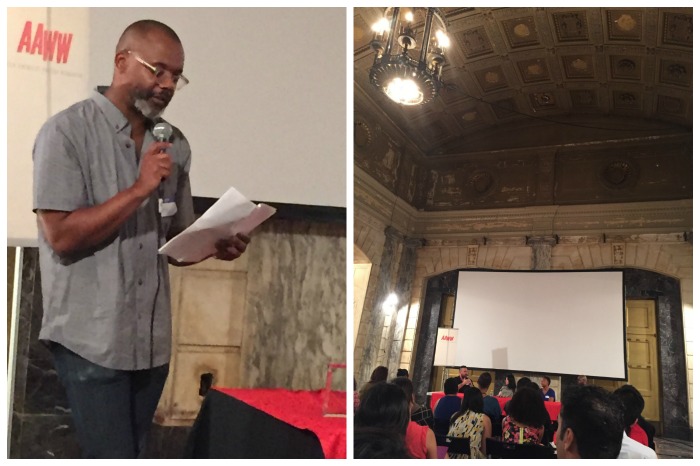 About 75 people attended, according to AAWW Executive Director Ken Chen. Most folks seemed to be in the 20-to-40 age range. They reflected an evolving America where people of color, especially Asians (fastest growing, largest immigrant population), are increasingly everywhere.

Which leads to the conference hot topics: race, social class, immigrant culture, gender, rejection, marginalization. While self-publishing was barely mentioned, everyone talked about 21st century online options for writers. As panelists pulled back the curtain on their lives, I found their anecdotes and advice very memorable.

I made it to five of the panels, which are each summarized in five separate little sections below:

Overcoming the pain of rejection

Writers are experts at beating up on themselves and turning rejection into major trauma. The “Hard Out There” panel covered ways to self-care, especially online. “The Internet allows you to gain exposure for yourself in a world that still has huge race imbalances and class imbalances,” said moderator Isaac Fitzgerald, who is books editor at Buzzfeed.com.

To build community in this unfriendly world, Kashana Cauley bonds with actively tweeting writers and editors. Twitter is “a great place to read articles, give a ‘like’ and make a connection,” said Cauley, a columnist for the online magazine Catapult.

Getting published in the Internet’s many literary magazines, even small ones, can launch and boost a writer’s career. These websites provide accessible platforms for trial and error in developing voice, explained Catapult editor Mensah Demary. Beyond that, writers need to fight the urge to wallow in Fear of Rejection and give themselves permission to write.

Because of that terror, New Yorker writer Jiayang Fan said she started her career feeling “rather timid.” Early on, rejection from one particular editor left her so demoralized that stopped pitching story ideas for two years. But with growing confidence and writing maturity, the former New Yorker fact checker climbed the magazine’s literary ladder to her recent promotion to writer. Hearing that, the audience cheered and Fitzgerald, the moderator, declared her seven-year slog to victory “badass.”

Now, Fan says she accepts rejection as simply “part of the game” and understands that a closed door “doesn’t say anything about my soul as a writer.” She also recommends trying “to come from your own viewpoint about a subject.” And if your article is not popular online, realize that people usually equate the most reader clicks with the best. In reality, it’s just that “some great stories are topics that are not sexy,” she explained.

So you want an MFA

The panel on “What I Wished I Knew Before I Got My MFA” was moderated by New School assistant professor Joe Salvatore. Joe got his three panelists — all authors of published first novels — to open up about the pros and cons of chasing a Masters of Fine Arts graduate degree.

Naomi Jackson, author of “The Star Side of Bird Hill,” applied to grad school three times before getting into the exalted Iowa Writers Workshop. The Flatbush, Brooklyn-based daughter of West Indian immigrants received the good news on the very day she received a $30,000 raise at her job.

She quit what had just become a six-figure gig, at least, on paper, to live on less than $20,000-a-year in Iowa. She found lots of networking, talent scouting, and community with fellow writers. But the two-year program “was not designed for Black lesbians from Brooklyn,” Jackson said. And she soured on some teaching strategies, like “Jedi mind tricks in assignments that make you feel less sure of yourself and sure of your work. If you’re lucky, you’ll develop a stronger sense of yourself. If you come out stronger, good for you. But I’m not sure most people do.”

Kaitlyn Greenidge only applied to Manhattan-based Hunter College. She was working at the time and stayed in her job while completing her degree. The author of “We Love You, Charlie Freeman” seconded Jackson’s insights. As a commuting student, she also found more value in interacting with fellow writers than she expected. It was still “a huge part of the MFA experience”and very positive, she said.

Forming peer alliances was essential to Karim Dimechkie, too. The author of “Lifted by the Great Nothing” appreciated the “really cool texture of layered writers” at the University of Texas’ Michener Center. But he felt younger classmates straight out of college faced a “nebulous time.” He recommends working for a few years before going for an MFA; the freedom to study writing might seem more valuable after working a few “bad jobs.”

The “Big 5” corporations dominate traditional book publishing: Penguin Random House, Macmillan, HarperCollins, Hachette and Simon & Schuster. Breaking into this top tier taught Bushra Rehman about creativity, serendipity and connectivity. “This is our life,” she said. “Why not live it amongst others in fun ways?”

Her first novel, “Corona,” is about a rebellious Pakistani-Muslim woman from Corona, Queens. After five years of repeated rejections from editors, a small indie press published it in 2013. The company had no money for marketing so Rehman promoted the book via her own website, blog and social media contacts. The visibility eventually paid off, literally.

One day, she received an email from Susan Chang, a sci-fi and young adult books editor within the Macmillan empire. “Corona” had popped up during a random Google search on Chang’s screen. She wanted to explore a book deal. In talking, the two discovered much in common as children from Queens, daughters of immigrants and alumni of the same high school.

Rehman hired agent Ayesha Pande to negotiate the contract for her next book. In evaluating the offer, Pande said she went through her editor check list: “Is there a real vision for the book? Is there real enthusiasm for the book? Can he/she wield enough power in their house to get things done? Is there connection with the author?”

Yes, yes, yes and yes. Now, Rehman is working on a young adult novel about a Pakistani American girl from Queens during the ’80s. Chang, whose Korean immigrant parents ran a dry cleaning store, believes America is at the beginning of creating new kids’ classics that offer an alternative to E.B. White. “All of these diverse voices are going to be coming out of places like Queens, Bronx and Harlem,” Chang said.

Believe in yourself as a writer

A panel about “Breaking Into Speculative Fiction” covered a flourishing genre built on science fiction and fantasy. Moderator Tim O’Connell, is the Knopf editor who works with many top sci-fi novelists, including Ted Chiang, a Chinese American. “When you commit yourself to being a writer, you find an avenue to go down,” O’Connell said.

The two writers on his panel found their avenues, against the odds. Jennifer Marie Brissett was a software engineer of Jamaican-British-American heritage who cashed in her stock options to open a Brooklyn book store. Then, she shifted careers again and began writing sci-fi. “Elysium,” a disaster story inspired by her 9/11 experiences was published in 2014.

Meanwhile, Malka Older spent years writing and pitching her novels. After endless rejections, she turned to a career in international emergency relief and is going for her PhD. But 18 months ago, she finally sold a short story to an editor who signed her to pen her first book, “Infomacracy.” It was published on June 7. NPR radio described it as “sci-fi thriller with election year chills.”

Creating your own community

“Finding Your Own Community” was moderated by Jarry Lee, Buzzfeed’s deputy books editor. The panel served up three Asian Americans who have been friends since their days as Stanford University undergrads. That was 15 years ago, right after the World Trade Center bombings. They were students of color adrift on a campus polarized by 9/11. Tony Tulathimutte, whose novel “Private Citizens” is just out in paperback, said his dorm was “as white as Greek yogurt.”

They struggled for a community they could identify with. Over time, they added more friends. To this day, they still have strong feelings about their college years —  instructors uncomfortable talking about race, questions about whether writing about Asian things would make them seem provincial, microaggressions from White classmates.

Now, grown up and successful professionals, they still value each other as a writing support group. They need to be their own best editors because today’s busy professional editors have very little time for detailed edits of most of their authors.

“My mentors are really my peers and friends,” said Jenny Zhang, whose first collection of poems was published in 2102 (“Dear Jenny, We Are All Find”).  She also appreciates social media as “a great place to slide into someone’s DMs” — but only if the direct messages feel like an offer of “genuine friendship,” she added.

Over the years, these three friends share all sorts of mutual support, including tips on writing and work gigs. They’ve also managed bouts of jealousy and competition. It’s still great to share work because even if they’re all writing about Asian characters, “they’re all different, too,” said Alice Sola Kim, a freelance magazine writer who is into sci-fi and fantasy.

The conference offered such a splendid snapshot of what’s going on now. Summarizing all the panels for you involved so many little details that I worry about typos, etc. If you find any, please let me know.

More importantly, I hope this post gives you some idea of what you can do with your own writing. Maybe you’ll even pick out some new authors to read.

So, onward together. And let’s keep talking. Do you ever suffer from fear of rejection at the eyeballs of editors and readers? How do you deal with it? Believe me, I can use your insights. :)