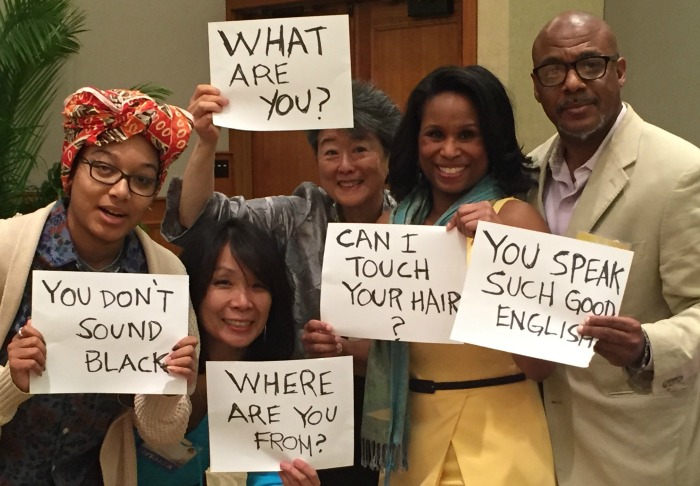 I just healed by sharing personal heartbreak on race issues. The experience chiseled me out of my emotional armor, the fake-confidence that protected me from acting like a lonely, yellow outsider. Maybe I can finally chase away the sense of otherness for a healthier, more satisfying option: wholeness as an American woman of color.

Miracles like this happen when people talk. Really talk. As you know, I rely on my shrink for deep conversation. But my latest transformation came through a radically different setting — South Jersey. Specifically, the Rutgers University-Camden campus, where I joined 250 like-minded women (plus a few good men).

The event was the first-ever Rutgers “Bright Futures” conference (April 14-15). We converged to commune and commiserate. What a remarkable group, so diverse in skin tones, cultures and agendas. Educators, community leaders, activists, journalists and wonks under one roof. The word “historic” kept popping up as we explored a common concern: educating and saving our girls of color.

Girls of color are a precious demographic. Long-suffering and long-ignored,  they’re finally receiving some belated attention.

Here’s the back story, in brief:

February 2014 — Pres. Obama announced “My Brother’s Keeper,” a five-year program to improve the lives of struggling Black and Latino boys and young men. It launched with $200 million in pledges from private donors. It triggered an obvious follow-up question: What about the young women and girls?

November 2015 — After two years of pressure from girl power advocates, the feds released a report on issues facing women and girls of color and announced a girls’ program. Except, minus a catchy name. And, with half the funding ($100 million in pledged donations).

What impressed me most was the genuine effort to seat everyone at the table. The forum went beyond Black, Latino and White, making room for Native Americans and Asian Americans too. And yes, creating a collective matters because we all care about our kids’ futures. 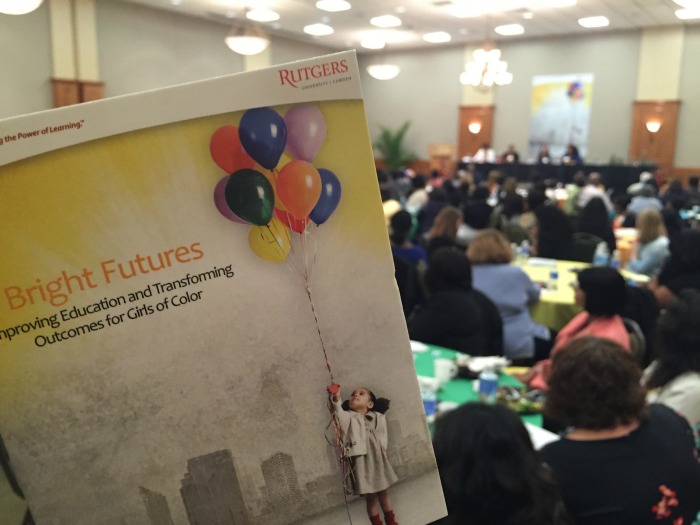 Everyone talked about the need to rise above the toxic divide-and-conquer mainstream American mentality. But I’m getting ahead of myself….

What “Bright Futures” gave us

After 18 months of planning, the event delivered three main speakers and a dozen panels featuring some 50 panelists (including me). The impressive array of intellect and heart brought in a range of experts, from juvenile justice advocates and teachers to lawyers and specialists in helping survivors of rape and sex trafficking. (Check out the list of participants and their organizations on the program schedule.)

By the way, the event, which was co-hosted by ETS, played well on social media. On the left, Maria’s Instagram. On the right, a tweet from the White House Initiative on Asian American Pacific Islanders, aka White House-AAPI: 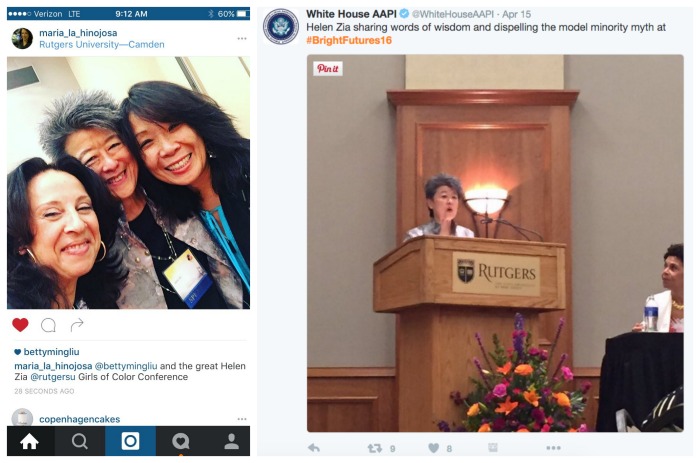 Once the Big 3 keynoters set the discussion framework, we broke out into a dozen or so panels. I was in “Stereotypes and Implicit Bias,” led by Rutgers visiting professor Lee Ann Elliott Westman. There were four of us, each with 10 minutes to talk.

Here’s what we looked like, in a tweet by the White House Initiative on Asian Americans and Pacific Islanders (WHIAAPI). Starting from your left: Teresa Nance, Sherell McArthur, me, Suzan Shown Harjo: 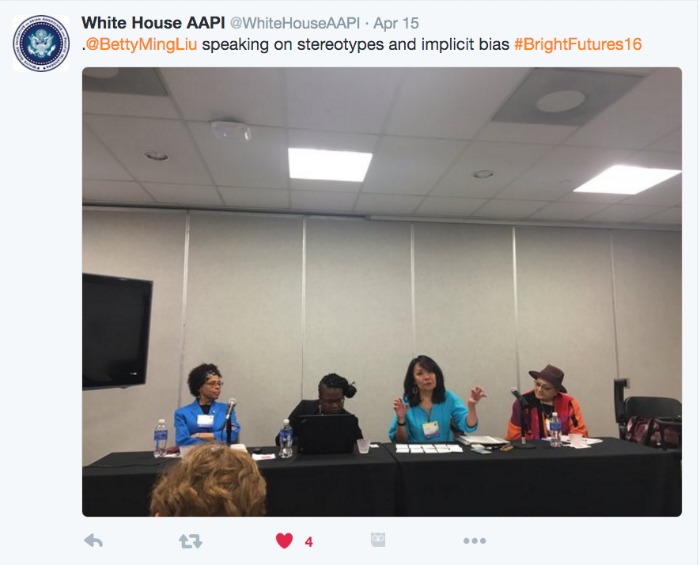 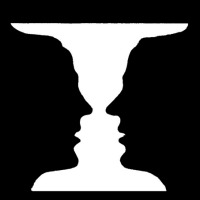 Roots of racism and bias

For a crash course on the roots of racism and bias, we had Villanova University Chief Diversity Officer Teresa Nance. She is also the associate vice provost for diversity and inclusion, and a PowerPoint ninja. Her speed lecturing is impossible to replicate.

But consider this photo for an example of how she challenged our brains. What do you see here, a vase or two faces in profile? This is a classic gestalt psychology test that reveals how we process visual cues. She also recommended links for further reflection, including:

The media’s brainwashing power was explained by Boston University Assistant Professor Sherrell McArthur. She explained the dangers of living in a society (ours) where 90% of all news outlets are controlled by six mega-companies.

This wasn’t one of her slides but it’s part of a larger infographic that I found online:

Among her points about education, she detailed a need to provide teachers with more diversity training; today’s kids come for so many different countries and cultures.

For a look at how changing laws can change stereotypes, we heard from the legendary Native American activist and poet Suzan Shown Harjo, who heads up the Morning Star Institute.

Her successes include the return of a million acres of land to Native peoples and the 1989 law which created both the National Museum of the American Indian in Manhattan’s Customs Building and a new musuem building in Washington, D.C. Her decades of legal wrangling with the Washington Redskins for a team name change continues to this day. 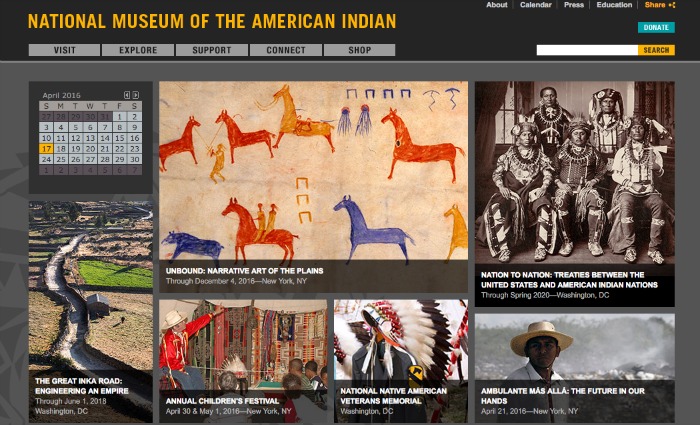 As for me, I focused on the personal impact of everyday racism. Everyone seemed to stop and think when I wondered out loud: Why are Asian, Caribbean and Latin cuisines considered ethnic? Hmmm, but French cuisine is NOT ethnic. Who gets to decide?

Like the other panelists, I overstuffed my 10 minutes. I won’t recap my personal blah-blah; it would take up an entire post! But I need to mention four points because they mean so much to me:

To make my points, I flipped through my home-made everyday racism signs.

Can I touch your hair?

Where are you from?

You speak such good English.

The room went silent. Clearly, reading the words cracked open some armored memories. The signs proved effective in quickly gathering the unresolved pain of our collective stories. I could feel the energy releasing in our safe space, which was beautiful.

Afterwards, when a woman said she liked my everyday racism signs, I gave them to her. But during the afternoon, so many fellow attendees told me they felt acknowledged by the signs that I made a few more. This time, I thought to take pictures for you.

I didn’t get the names of the two wonderful people to the far right and far left. But many of you will recognize Rutgers University-Camden Associate Chancellor Nyeema Watson, Helen Zia and me:

A special thanks to the White House’s AAPI folks. When one of their panelists had to cancel last-minute, Helen Zia suggested me as an alternate. Lucky me!

I really enjoyed the conference. Making new friends, hearing new voices (outside of my head) and bonding with old friends made for two very refreshing days. And what a bonus to hang with Helen, who I usually see once a year (at most).

At the end of a long Friday afternoon, the two of sat together through a final presentation, happily comparing notes. I stayed for the talk by White House-AAPI Executive Director Doua Thor about her organizations online data resources for AAPI research and to see if she’d say more about her Hmong heritage — one of the three dozen Asian American sub-groups that we need to hear more about.

Then, I drove home.

My inner girl of color felt really good. She finally found a safe place for hugs, nourishment and sharing. She can carry on now, more comfortable in her adult skin as a grown woman of color.

And, what about you? Any thoughts on girls and women of color?