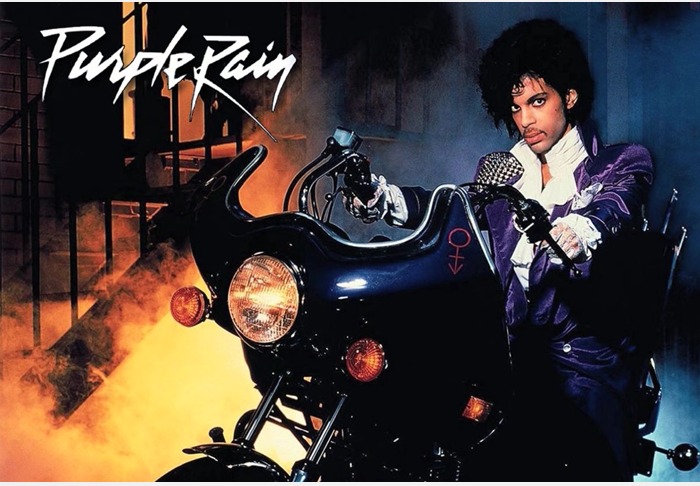 I am writing my first-ever fan letter, to say “thank you.” Three decades ago, we met in a fleeting New York moment that gave me faith in my nerd self. With your death, I see the memory through fresh eyes. By staying fabulously purple your entire life, you’ve shown me that cool is possible at any age.

The only other time I’ve told the story of our meeting is in one of my NYU journalism classes. We were reading a student’s homework, which mentioned a “cool” place to visit. My reaction? Okay, class. We need to review a basic writing principle: Show, don’t tell.

I explained why it’s meaningless to tell an audience that a place is cool. After all, we each have different ideas and standards for what’s cool. Instead, writers need to show “cool.” This is when I brought up the story of meeting you. When I finished, one student said, “That’s pretty cool.”

Then we went around the room, sharing coolest memories. One student attended a Manhattan press event where he had a chance to drive a fancy yellow car around the block — I think it was a Porsche. An Asian foreign student fondly recalled her semester abroad and the fun of joining her gal pals in dining out with some cute European boys.

We agreed that feeling cool builds confidence. Believing in ourselves makes us brave enough to try new adventures. And meeting you reinforced that message for me.

Our paths crossed three decades ago, on a cold, wintry Manhattan night. We were in the gritty East Village. This was the late ’80s, when cheap rents and run-down properties made the area popular with working-class families and artists. The realness is gone now, replaced by luxury condos, hipsters and craft beer bars.

But back then, the East Village had a remarkable night club called The World.

We met in the relatively quiet V.I.P. room, which had the look of a seedy, forgotten boudoir. Dirty walls, worn upholstered furniture, tattered velvet. The wreckage was real, not the fake-distressed decor we see everywhere today. It was midnight, which was past my bedtime.

I sat in a lumpy chair, sipping a drink and chatting with a few strangers. When you slipped in, we pretended not to notice. We wanted you to relax, have your privacy and enjoy the scene.

Of course, I also really wanted to talk to you! So I eventually made my way to the bar, walking right past you. Our eyes met. And yes, you really looked at me, offering a shy smile! We said hello. Then I kept moving. I hung out for a while longer then took a cab home.

I probably spent an hour in the V.I.P. room, with our actual encounter barely lasting a New York minute. Then again, since I was in my early 30s, it might be more accurate to say the encounter took 30 years. Meeting you capped an evening that took me way beyond my comfort zone. The memory is a Note to Self. Own my nerdiness, or whatever my personal reality. This is the secret to authenticity and creativity.

Transformation: revenge of the nerd

At the time, I was a newly-minted gossip columnist for The New York Daily News, a Top 10 newspaper in an era when print mattered. I knew nothing about covering trendsetters or partying. But I found my way to the club after cold-calling World owner Frank Roccio. Over dinner, we talked about growing up in NYC. He was Bronx Italian and wanted to hear about Chinatown, where strict Chinese parents and thick glasses made me despair of ever being normal (whatever that meant), let alone cool.

Afterwards, we took a short walk to his club. The bouncers pulled open World’s battered door, blasting us in house music from inside the former catering hall and theater.

A booming electronic beat shook the huge, crumbling room, packed solid with sweaty dancers. Frank and I stood at the top landing, surveying the pulsating scene. It was a mixed, young crowd, dominated by handsome, dark-complexioned, gay couples in T-shirts, jeans and sneakers. What a sight for me, the sheltered homebody.

Mind you, this was at least a decade before the release of “The Matrix” hit movies. But we already had the look. Frank: flowing blond hair, dressed head-to-toe black, with a long, black coat. Me: long, black hair, and a puffy, black calf-length Norma Kamali sleeping bag coat. A gray-green Morgane Le Fay blouse was my only shot of color, with everything else black — the mini-skirt, matte pantyhose, suede Maud Frizon heels.

Frank took my hand. He inched forward. I braced myself for elbowing our way to the V.I.P. room.

But then, without a word, more than a dozen lads began peeling off the dance floor. They sidled over to us from every direction. You know how geese fly in V-formation? Well, they formed a V-shaped wedge around us. Like a human vector, they smoothly steered us through the parting mass of gyrating bodies. It was the coolest thing that ever happened to me — until I met you.

What you gave me

With the ongoing tributes to your too-brief life, I am getting to know you better. It hurts to read that you suffered terrible chronic hip pain. I keep wanting to understand more. You were certainly out there, eccentric but always interesting. I especially like what you said about inspiration in a TV interview: “As you grow older, you learn and you start to — you get smarter.”

So I’m realizing that the spirit of adventure can live on, even as I approach my 60s. I might even dig out the Norma Kamali coat and Morgane Le Fay blouse from the attic. At the very least, I’ll make more of an effort to change my clothes from the usual hoodie and leggings.

Thank you for influencing me in so many ways.