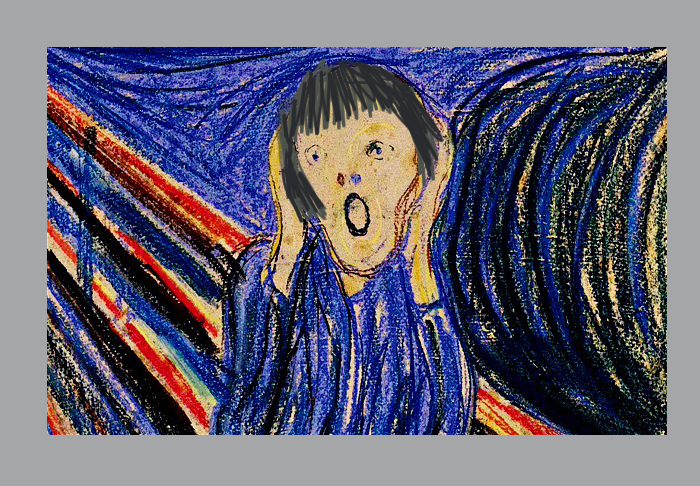 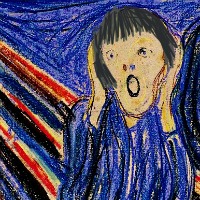 Kevin Nadal is a psychologist, comedian, activist and professor who has solid advice for dealing with life’s daily insults. Take his insights and protect yourself. With help, we can feel safe, or at least create emotionally safer spaces.

As a versatile expert, Kevin gets people talking about this pervasive, subtle form of discrimination. The tiny jabs and assaults on our dignity build up. Untreated and ignored, they lead to struggles with mental health, self-esteem and depression.

“Talking about things validates each other’s perspectives,” he said during our recent phone chat. The goal, he added, is to explore ways to support each other.

Microaggressions can be intentional or unintentional words and deeds, or physical environments. Taken together, microaggresions demean us by race, gender, sexual orientation and/or social class. The negative comments and behaviors also afflict other stigmatized communities such as the mentally ill, the addicted, the eating disordered and other historically powerless groups.

These micro moments come on top of major in-your-face hating that’s another component of daily living. Today, nearly half of all American adults say they’ve experienced major discrimination such as racial profiling by the police, losing out on promotions or mistreatment by health care providers, according to a March 2016 survey by the American Psychological Association. That’s the macro picture, the big stuff. If we add the little, teeny things inflicted on us, stress levels go up even more.

Unlike major forms of discrimination, microaggressions might seem barely there:

These uncomfortable everyday scenarios are a hot topic on college campuses. These days, most schools hold microaggression workshops. The issue has gotten so mainstream that even Buzzfeed.com, a pop culture website, features a bunch of videos with provocative titles like, “14 Words That Carry A Coded Meaning For Black People,” “3 Times Women Aren’t Taken Seriously” and “What’s The Worst Thing Your Family Has Asked You About Being Gay?”

Critics dismiss the “M” word as hypersensitive political correctness. But Kevin believes anyone who denies microaggressions is “probably committing the most microaggressions” while “denying others’ experiences and realities.”

Still, some seeming offenses are non-issues. “If you like Beyoncé and I don’t like Beyonceé, that’s not a microaggression,” Kevin explained. “We’re looking at systemic, historical and interpersonal microaggression.”

Another example: He knows of people working on papers about vegetarians and microaggressions. But Kevin, a vegetarian-turned-pescatarian, dismissed the topic as “not on par” with discrimination endured by people of color, women, the disabled or people who are LGBTQ (Lesbian, Gay, Bisexual, Transgender, Queer).

How we react to microaggressions

In 1970, black psychiatrist Chester Pierce coined “microaggression.” The Harvard University professor came up with the word to address insults and indignities inflicted by non-Blacks on Black folks. Over time, other marginalized communities took up the concept too.

With the 2012 election of Pres. Barack Obama, America hit another huge benchmark. For some, the nation’s first Black commander-in-chief symbolizes an end to racism. The reality is very different.

Microaggressions come in all shapes and sizes. Some are minor, more like “ouch moments,” said Kevin. Others run so deep in that we’re blind to their existence. For instance, consider the concept of “ethnic restaurants.” Why are the foods from countries of color ethnic? Why are French restaurants never labeled ethnic? Clearly, said Kevin, calling a restaurant “ethnic” is “letting white society define what’s ethnic.” Which is why I will never use the phrase “ethnic cuisine” or “ethnic restaurant” again.

To build awareness, Kevin has run hundreds of microaggression workshops. In January, I caught one of his presentations at Asian American Federation offices in New York City. About two dozen of us showed up on a cold, windy rainy night. Most of the attendees were millennial Asian American women searching for solutions to workplace tensions and personal conflicts. 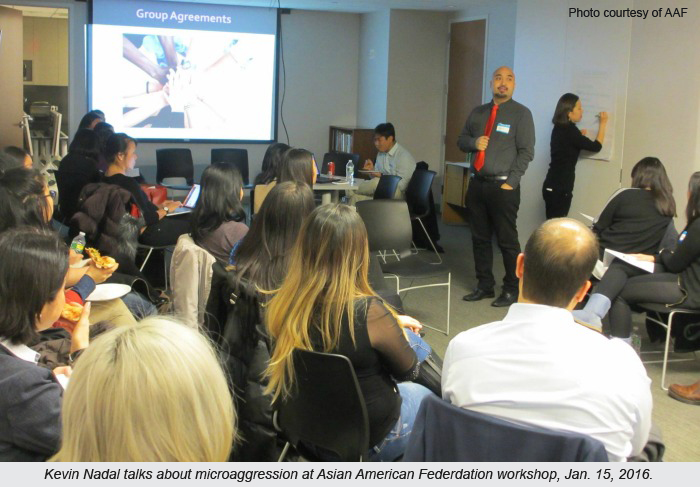 When it comes to Americans of Asian heritage, the general perception is that very little racism exists. Actually, Asians have suffered throughout the nation’s history. From 1882-1943, federal exclusion laws banned most Chinese from immigrating to the U.S. In 1930, Filipino Americans were lynched and beaten during the Watsonville Riots. During World War II (1939-1945), the feds forced Japanese Americans from their homes, seized their property and herded them into desolate internment camps.

As for today, there’s the dreaded Model Minority stereotype. It holds up Asian Americans as quiet, educated, family-oriented people of color. Portraying Asians as a model group creates conflicts with other communities of color because “you’re taught that you’re better,” Kevin said.

The stress of dealing with racial microaggresion damages our mental health, according to a 2015 study by Kevin and his colleagues (the link is at the end of this post). Asian Americans with at least a college degree are more likely to face problems in the workplace or at school. Skin color, speaking with an accent and social class compound the pressure.

Making matters worse are the microinvalidations. In other words, people brushing off your experiences instead of validating them. You’re making something out of nothing. It’s not a big deal. Get over it. You’re too sensitive.

For typical microaggressions, consider the following statements and what they mean:

How to deal with microaggression

In Kevin’s classrooms, those that are outnumbered stick together. He’ll watch how the three Asians hang out together or the few black students become friends. It’s a familiar scene in my classroom as well as schools, workplaces and social gatherings everywhere.

“People of color feel safer in an environment with more people of color, and might feel more guarded in a group with majority white people,” said the associate professor in psychology for John Jay College of Criminal Justice.

On the other hand, safety with “your own people” is fraught with conflict due to “intergroup” microaggression. Translation: The things we say and do to family, friends community members can be very, very nasty.

All too often, immigration status (American-born versus newcomers) becomes a harsh dividing line. There’s judgement over how Asian you are, maybe to the point of being unappealingly “fobby” — as in FOB (fresh off the boat). Or maybe you’re “not Asian enough” because you don’t speak the language. Hating on skin color (darker versus lighter) is a sad pattern too.

In the microaggressive moment, Kevin says we instantly tornado through several stages of emotion and thought:

From here, we have decisions to make. Kevin suggests various ways to address microaggressions:

And when we commit microaggressions…

After reading three informative studies co-authored by Kevin, I was mortified by my past behavior. But everyone microaggresses. Sharing about it helps lessen the guilt, said Kevin.

“Admitting when you commit a microaggression is really freeing,” he added. “It makes you human as well.”

The links below take you to summaries of his reports, as well as ways to buy the PDF or rent it for a few bucks:

How about you? Are microaggressions causing stress in your life? Any solutions?