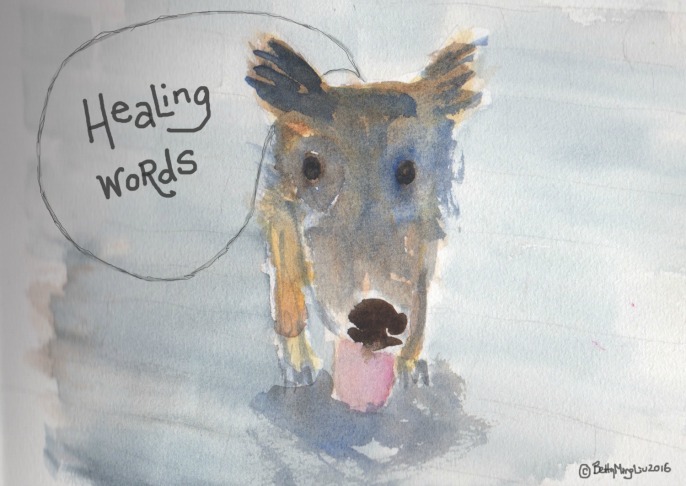 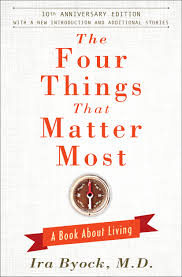 For most of our lives, my younger sister and I had A Difficult Relationship. For this, we hold our parents responsible. They constantly compared us to each other, pushing us to be twin success stories. When we were little, our mom even dressed us in identical outfits.

We grew up feeling competitive and judgemental of each other. Then a year ago, I said four things to my sister that liberated our relationship from the ancestors.

I found the four things.

“The Four Things That Matter Most: A Book About Living,” by Ira Byock

is a famous book about having end-of-life conversations. My shrink told me about it. The 2004 bestseller posed such an intriguing idea: Why wait until someone’s dying to set things straight? Why not enjoy a supportive relationship now?

Byock is a doctor who works with dying patients. As a medical expert and respected researcher, his book offers many examples of the four things in action. The stories prepared me for what might — or might not happen — if I ever said the four things to my sister.

I didn’t know if I could do it.

And of course, you want to know the four things. Here they are:

Only 11 little words. Eleven powerful, but incredibly difficult words to say. Scary, the idea of talking like this to anyone. In the case of my sister, the ability to utter those words required letting go of the jealousy, rivalry and resentment that plagued us since birth.

We are two years apart and spent our childhood shackled to each other. As the big sister, our parents put me in charge while they worked long hours. I had to take my sister with me everywhere. We both hated the lack of privacy and freedom. Making matters worse, our folks layered even more tension between us by saying things like, “Why can’t you be smart/good/fill in the blank like your sister?”

By adulthood, we had an on-and-off relationship. The competitive undercurrent was always there. Who had the better job/wardrobe/marriage/etc.? Our father died when we were teenagers. Our mom passed on in 2010 at age 92. Caring for her led to many fights.

Reading about the four things brought back all these memories. Having them in my face was exhausting. So much negativity — who needs this kind of energy-draining crap? I wanted my freedom from the past.

So one day last year, I took action. And girl, the four things made me really nervous. Those few itty, bitty words took me far beyond my comfort zone.

There we were, my sister and I hanging out for some reason. I forget why. But at some point, we fell into the usual reminiscing about our mother. The smart, complicated diva.

On this particular day, I thanked my sister for the great job she did at managing Mom’s finance and spending time with her. Our mother endured a long stretch in a nursing home located a mile from my sister’s house. I, meanwhile, was a 2.5-hour drive away, giving me a convenient excuse to keep my visits to a minimum.

From here, my sister returned the compliment. She thanked me for being there during our mother’s final hours. Even though saying good-bye brought tremendous resolution for me, my sister couldn’t bear watching Mom die and stayed away.

Finally, I took a deep breath. Then I said something like, I just read a book about dying by a big-deal expert. He believes there’s four things people should say to each other in order to have good relationships. I want to give it a shot.

With that, I did the deed. Thanking her was already done. Moving on, I somehow managed to ask for forgiveness, then told her that I forgave her. I’m sure I mentioned a few specific issues but can’t remember them now.

And then, time for the dreaded words, “I love you.” We both smiled awkwardly. Then she asked if she had to say the four things back to me.

Of course not! Do whatever you want.

End of conversation. More than half a century of mutual torture had come down to a few squeamish, anti-climatic minutes. And then, nothing.

In his book, Byock gives examples of various outcomes. Some people hear the equivalent of angels singing. Others were like us, watch a potentially touchy-feely moment evaporate into seemingly zero impact.

But over time, our interactions have consistently improved. My sister and I began emailing a little more often. Saying “thank you” came easier. We even start seeing each other more. The need to rehash the past in accusatory ways has disappeared, leaving me feeling 10 pounds lighter.

So many thanks to the good doctor and his belief in the healing power of words.

Let me know what you think! xo