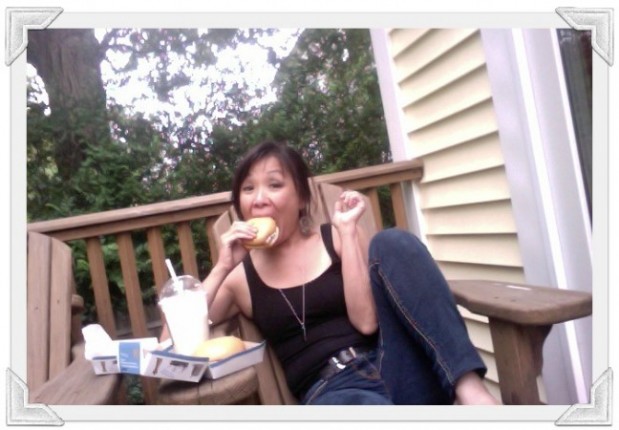 Ugh, I have to lose 16 pounds. Doctors’ orders. Otherwise, diabetes and achy knees will ruin my future. But here’s my other problem: Chinese American women gain weight for specific reasons. We have special issues in losing weight and eating healthy.

According to recent studies, genes and culture create problems in very specific ways. The issues apply to both Chinese immigrant women and American-Born Chinese — the ABCs. The findings spin a story that will sound familiar for a lot of other communities too.

This is serious. On the table are life-and-death choices. To get heavy or stay heavy brings a menu of physical ailments that can lead to depression. I’m not here with fat-shaming and guilting, which feeds eating disorders. The topic demands thoughtful, sensitive discussion. The goal is more support for us all.

Last year, the alarms went off in my life. My orthopedist told me that losing a few pounds would cure my aching knees; every extra pound I carry puts 25-30 pounds of extra pressure on my knees. My annual physical led to a similar warning. The doctor said I had to drop some weight or risk becoming pre-diabetic.

The news terrified me because diabetes runs on both sides of my family. My fat dad, who died of a heart attack, had a diabetic brother whose foot was amputated because of the disease. My diabetic mother withered to a bag of bedridden bones; a series of strokes left her unable to feed herself or walk.

So I started researching why Chinese American women gain weight. And I get it. Between my personal history and cultural history, I have a fuller understanding of the forces at work. In a few months, I’ll turn 60. With what I now know, I have a shot at breaking the yo-yo dieting cycles that plagued me since youth.

What follows is a summary of three useful studies that address why Chinese American women gain weight.

First of all, genetics make Chinese American women prone to obesity. Actually, all Asians tend to get fat and diabetic at lower body mass indexes (BMI). Before your eyes glaze over, stick with me for an easy explanation. You can figure out your BMI by dividing your height into your weight. If this is too much math for you, just Google “BMI calculator” and plug in your numbers.

Usually, a BMI of 25 is the cut-off for tipping into obesity. But for Asians, 23 defines us as overweight and, 27.5 for obesity.

Okay. Now let’s continue to the meat of this topic: Chinese American women weight due to cultural identity issues. So chew on this question: Are you traditional Chinese, mainstream American or bicultural? The bottom line for our bottoms is that the more American we get, the fatter we are.

In a survey on obesity trends among Chinese American women, 25.5% of the ABC respondents were either overweight or obese, compared to 18.1% of the foreign-born.

The nutritionists found that the women’s relationship to food was directly shaped by how western they felt. Women in the survey fell into three categories:

• Traditionalists relied on familiar, healthy Chinese cooking routines such as steaming rather than frying.

• Bi-culturalists, who operate in both Eastern and Western settings, are highly influenced by the approval/disapproval of their significant others. Their ability to eat in healthy ways is directly related to how confident they feel about making independent decisions for themselves.

• ABCs, the most overweight and most Americanized, were also the most independent. They based food choices on personal attitudes and freedom of choice.

Other findings: Those who identified as more westernized were more likely to live in middle- to high-income neighborhoods. The longer an immigrant stayed in the U.S., the more weight she gained. Whatever their situation, everyone agreed that cooking at home and eating-in helped prevent excess pounds.

For this study, 300 Chinese American New Yorkers of both genders filled out a 146-question survey. Most respondents were female (65%), college educated, never married. They were 18 to 40, with a mean age of 26. They completed their surveys between 2008 and 2009.

Immigration plays a huge role in explaining why Chinese American women gain weight. Experts say most immigrants are at their healthiest when they first arrive. This is true even for the poor. Once they settle in, they sit more, snack more on empty-calorie junk food and grab more sweet treats.

But length of stay is only one critical factor in managing eating patterns. A Chinese immigrant woman’s comfort level with American culture greatly influences her food head, according to a 2014 study that tracked their dietary habits. The more American she gets, the more likely she is to eat crap.

From year to year in this study, researchers found that Chinese immigrant women gain consistently ate the same amounts of fish, pastries, tofu, fruits and veggies. Yet, the ones who acculturated with their new homeland completely changed their approach to food.

From Chinese foreign students to permanent residents, everyone’s more likely to dine on pizza, burger and sandwiches. Fats, sweets and grab-and-go convenience foods were on the rise, too. The result is increased risk for weight gain and chronic diseases like hypertension, diabetes, heart disease, colon cancer and breast cancer.

For this study, researchers recruited 312 Chinese immigrant women in Philadelphia over a three-year period (2005-2008), then tracked them through 2010. The study, “Acculturation and Dietary Change Among Chinese Immigrant Women in the United States,” ran in the Journal of Immigrant Minority Health (2015, Volume 17). Authors of this report are: Marilyn Tseng of California Polytechnic State University’s Kinesiology Department; D.J. Wright of Westat; C.Y. Fang of Fox Chase Cancer Center’s Cancer Prevention and Control Prgram.

Lack of family support is an issue

All Asians groups of both genders are 60% to 70% more prone to the dreaded Type 2 diabetes than whites. The disease which killed my mother is now the fast-growing illness among older women of color. Even worse, diabetic women of color face twice as much risk as their diabetic male counterparts.

• Women need people, especially group classes and support groups. They also turn to family members and friends, who don’t always step up. Men are different. For help, they’re more likely to search the Internet or lean heavily on their wives.

• Women struggle to prepare family meals and care for everyone. These responsibilities make it hard to eat right and self-care.

Jumping off these general issues, diabetic Chinese immigrant women face a special level of misery. Studies call out Confucian values for treating women as second-class citizens, which can discourage them from making their health a priority.

A recent study of 146 San Francisco Chinatown residents, found that women juggled full-time work AND managing the household. They specifically mentioned feeling depressed as they juggled emotional burdens, poverty and their families.

Many felt a lack of support for their diabetic needs. As an example of why diabetic women of color might be in worse shape than their men, these Chinatown women admitted to struggling with food. Their families demanded “regular” cooking at mealtime. Their diabetic needs for bland, simple foods fell to the wayside.

But intervention by the study’s team brought change. With guidance and advice, the women showed improvement in managing stress, communication skills and their disease. As for the men participants, they left the project unchanged.

Researchers conducted a clinical trial with 145 mostly Cantonese-speaking participants from China and Hong Kong. They were 56% women and 73% married; 87% had a household income of less than $50,000.

The study, “Gender Differences in Factors Related to Diabetes Management in Chinese American Immigrants,” appeared in the Western Journal of Nursing Research (2014, Volume 36, No. 9). The authors are: Catherine A. Chela and Christine M. L. Kwan of University of California, San Francisco; Kevin M. Chun of University of San Francisco; Lisa Stryker of Oregon Research Institute.

If you click on the links within this post, you’ll find more details about each report. You’ll also find links to related studies, including research for other ethnic and racial groups.

And here are a few tips from Doreen Liou, author of the obesity study featured in this post. “Since peer influence tends to be strong in younger audiences, educators and health professionals need to promote easy and practical ways to prevent weight gain that are socially acceptable (e.g.: eating smaller portion sizes, limiting sugar sweetened beverages),” she told me via email. “Confidence to engage in healthy eating behaviors can be increased in small, achievable goals that are attainable for Chinese women.”

If you can relate in any way, share your story. I’m looking to start an on-going discussion. My thing is about why Chinese American women gain weight. But this topic is huge (pun intended) for everyone.