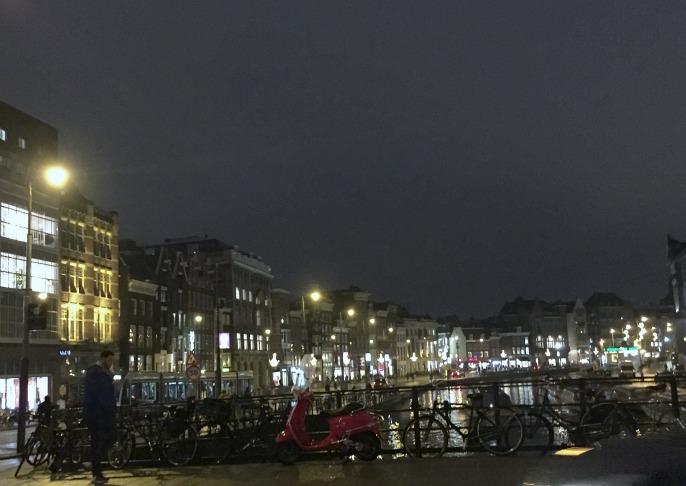 Vacationing in Amsterdam transitioned my daughter and I to a grown-up relationship. For the first time ever, we traveled as two women with romantic partners in tow. Thankfully, we survived the emotional leap, and the awkwardness of our new reality.

From changing diapers, I now had to treat my daughter as an adult, with an, um, private life. And, I also had acknowledge that I have a private life now too. We used to always share a room on our getaways. Now, we had boyfriends and separate bedrooms — modern family issues that I finally had to confront.

So Amsterdam brought a mommy makeover. Less bossiness on my part. More respect for personal boundaries. Most importantly, I had to embrace spontaneity. Since any one of those elements is beyond my nature, juggling all three at once became a personal miracle.

This rite of passage was sparked by my daughter’s Fall 2015 college semester abroad. She and her bf were both in Europe to take classes. My bf and I flew from New York to visit them. We shared a long weekend in Amsterdam. There were also a few days in Barcelona. Then, my bf and I went home.

After the semester ended and my daughter was home again too, I wanted her thoughts on the double-dating. How would she grade me as the mom-on-vacation? Probably a B+, I guessed, acting modest.

She paused, then broke the news. “More like a B,” she answered, trying to sound encouraging. “You were really anxious in Amsterdam and seemed stressed. But Barcelona was definitely an A!”

I was disappointed. Why not an A, all the way? After all, I tried so hard. Is this how my students feel about my stingy grading policy? This kinda sucked. Why, why?!

She explained. “Sometimes, you talked to me like I was an idiot,” she said.

Then, there was the last night in Amsterdam. Everyone was tired. I worried about the next morning. A cab was scheduled to pick us up at 5:30 a.m. for the airport. That’s when I pulled rank and told her to pack right away. She wanted to get ready at her own pace. But I kept after her until she grudgingly complied. Do what I tell you, now, now!

As she talked, I reflected. If we were truly adult traveling buddies, I’d never talk to her like that. If I wasn’t her mom, she’d act differently too. There was also other stuff that went on.

The need to accept — and respect — my daughter’s decisions began with the very idea for the trip.

One day, out of the blue, she texted me: “Want to come with us to Amsterdam?”

Actually, I had zero interest in Amsterdam. At my age, just thinking about the city famous for legalized pot and prostitution made me feel old. With tremendous effort, I buttoned my lip, focusing instead on the horizon. I could see it in the distance, a mother-daughter world beyond my comfort zone.

And how nice to be asked. “Yes, would love to!” I messaged back right away.

Amsterdam constantly surprised me with new lifestyle ideas.  I was especially smitten by the bicycle culture. 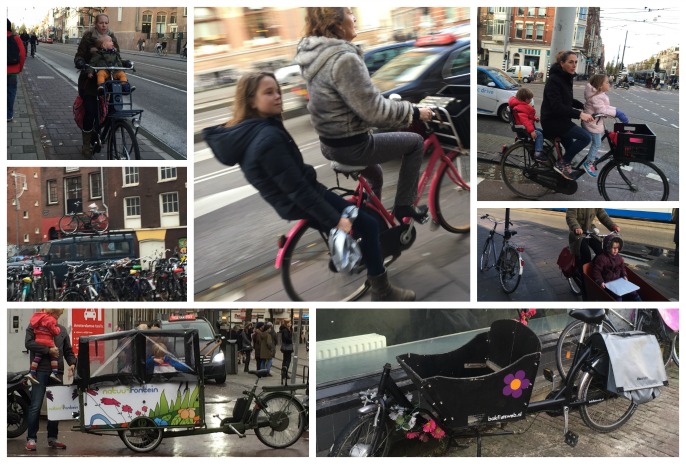 The organized chaos of street traffic flowed with designated lanes for the trolleys, cars, bikes and pedestrians.

My daughter and her bf had both worked hard to help finance their semesters abroad. I knew they were stretched thin and was happy to cover most of our getaway weekend bills. The expenses were manageable because Amsterdam is a relatively affordable travel destination. We also went in late-November, when the weather gods pelted us with freezing, wind-whipping rain.

With an off-season discount, I booked a stylish Airbnb apartment in a neighborhood filled with cafes and gabled townhouses. At $196.50 a night for four nights, our two-bedroom duplex loft duplex a spacious dining/living room, washer/dryer, plus a new kitchen and bathroom. The fabulous location gave us genuine pleasure and was worth every dollar.

Lesson#4: Give everyone space

My instinct was to mom us into a collective itinerary, which stressed everyone out. Who put me in charge, anyway? Besides, planning for this group was next to impossible. We were two couples on two different clocks.

They were night owls who slept in until noon and stayed up past midnight for night life or Netflix-and-chill. We were morning people out on self-guided walking tours and museum field trips, who collapsed in bed by 9 p.m.

Once I stopped trying to make things nice — whatever that means — we all relaxed. Even me. Finally, I was letting go of the anxiety that my daughter talked about.

From there, the weekend mellowed out. We did some touristy stuff together, like a canal boat tour. We also walked through the Red Light District, where sex workers in red-lit glass booths trawled for customers. As we left this creepy scene, we stopped for a freshly-made crepe.

On our own, me and the bf visited the tiny Houseboat Museum for background on Amsterdam. The city, built on wooden stilts above a marsh, sits at the mouth of the Amstel River, surrounded by ring after expanding ring of circular canals. Today, 2,256 licensed houseboats still moor along the canal banks. 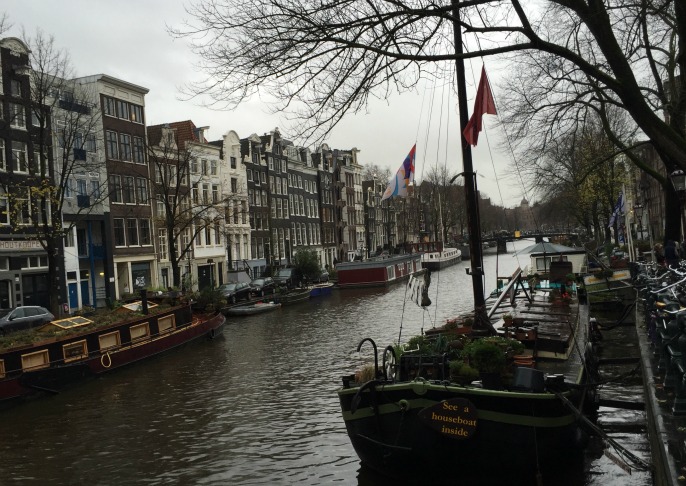 The Van Gogh Museum gave us the ultimate Vincent Van Gogh experience. This Impressionist painter has always been one of my favorite artists. We left with a print ($8.50) of this painting below. A skeleton smoking a lit cigarette. Just what we needed for the bulletin board in our home office (left). 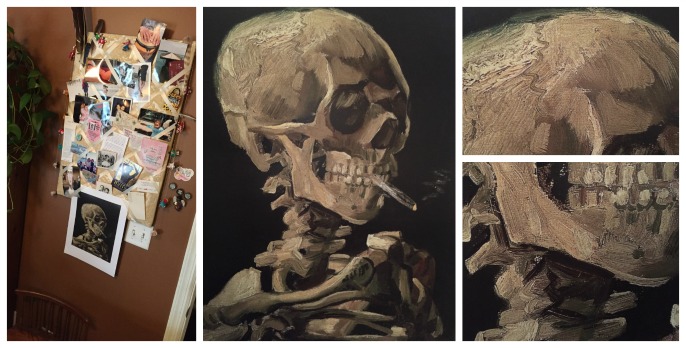 Navigating the city for such a short visit called for teamwork. To find good restaurants, my daughter’s bf introduced us to the smart phone apps for TripAdvisor.com and its companion website, TheFork.com. Both provide user reviews.

As for me, I kept the apartment stocked with snacks. Provisions added to group harmony. We learned the hard way that when one of us got hangry, that hungry-angry crankiness made everyone irritable.

Lesson #6: Food is for bonding

We found great baked goods everywhere. Can you spot the sign for “gluten-free bread” in the photo of a local bakery below? At Ekoplaza, Amsterdam’s answer to Whole Foods, extra virgin olive oil (olie) was sold on tap, like it was beer. Farmers markets offered local options, including a pale green wasabi cheese.

Because the Dutch ruthlessly colonized many countries of color in centuries past, Amsterdam is known today for its international palate — from African and Egyptian restaurants to Surinamese roti.

We almost always ate dinner together, the only hours when everyone was awake. Our average evening meal ran about $23 per person without booze. At Kartika, we ordered the rijsttafel — an Indonesian sampler of many little dishes that is popular with tourists (see the two photos to your right, below).

Amsterdam’s teeny Chinatown is only a few blocks long. It’s a Cantonese stronghold, serving traditional fare. I got a kick out of the Dutch names for dishes. We had a great dinner at the insanely popular Nam Kee.

Lesson #7: Be patient. And, gracious

In comparing notes on the trip afterwards, my daughter and I both agreed on a few points.

But my daughter’s right; Barcelona was better. By then, we’d gotten used to being around each other, sort of like a pack with a group dynamic, affectionately connected to each other.

For that, we all get an A+. If you have more tips, ideas or suggestions, please share them. Bring on the adventures! I’m ready for more.