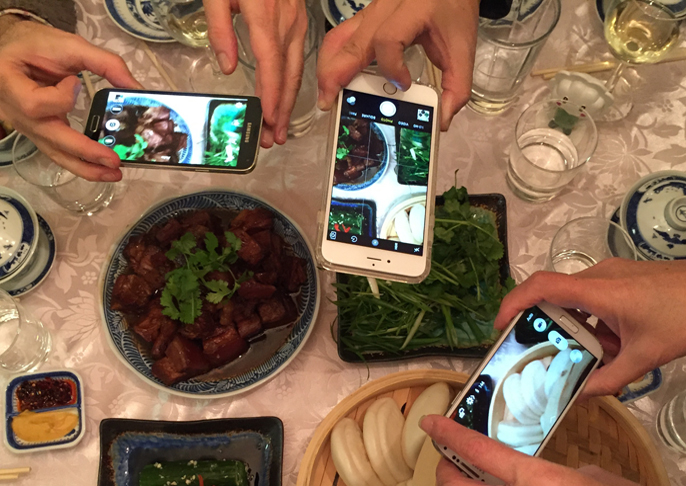 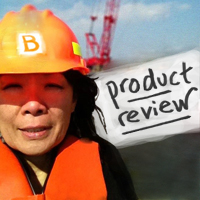 Just in time for Feb. 8th’s Lunar New Year! A new Chinese cookbook has me serving up elegant dishes that are shockingly simple to make. What an emotional bonus. Finally, it’s possible to be authentically Chinese without torture. Never before have I paid so little for such high-quality therapy.

“Phoenix Claws” is about more than just following pretty recipes. This book offers practical, clever kitchen skills that teach technique. What I’m learning gives me the culinary confidence to be as Chinese/American/fusion as I want.

Some dishes are so easy that they call for only three or four ingredients. At the other end are spectacles that take hours to make, like “Buddha Jumping Over the Wall.” This complicated casserole calls for 17 ingredients — including chicken, duck, sea cucumber, quail eggs — and takes nearly five hours to make.

Taken together, the range of options for the home cook add up to a comprehensive culinary vision. The attention to detail in both content and design is marvelous. I’m also partial to the little red ribbon bookmark attached to the book’s spine. 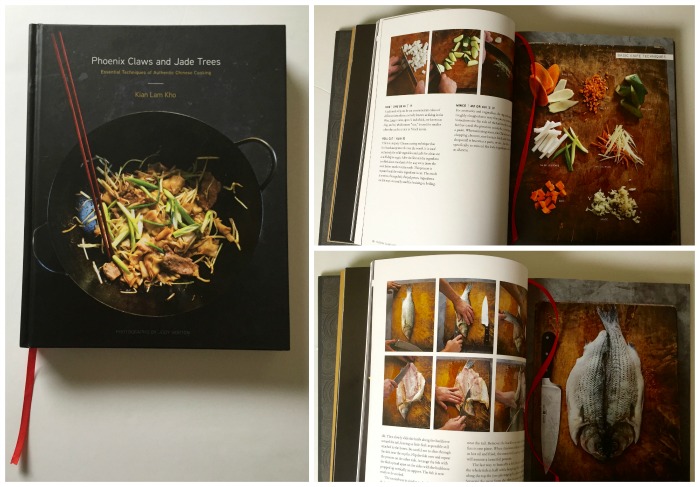 What’s inside this special book

The author is Kian Lam Kho, a private chef and Chinese cooking instructor at New York City’s venerable Institute of Culinary Education. Kian knows his way around the kitchen and students. I say this as a friend who has studied with him and dined on his unbelievable home-made banquets.

This is Kian’s first cookbook, a labor of love featuring 158 recipes that tour China’s many regional cuisines. The dishes and their clear, concise instructions are wrapped up in 368 pages that cover everything I need to understand about best practices. The beautifully illustrated instruction include:

To be honest, I never expected to vibe with Kian’s book because of the title. I was put off by the exotic orientalism of “phoenix claws” (aka chicken feet) and “jade trees” (aka broccoli). They gave me flashbacks to my 20s, when I wanted to learn Chinese cooking, only to face teasing from my mom and aunties. Oh, you American girl! You can’t cook like a real Chinese.

While they meant no harm, my immigrant womenfolk had an impact. Over the years, I developed a distaste for following tradition and traditional recipes. Sure, people still enjoyed my cooking. And I enjoyed making things up as I went along.

Kian is very encouraging in the book’s introduction: “Armed with this knowledge, you can not only re-create dishes from all over China and many East Asian countries, but you can cook almost any ingredient in any fashion you’d like.”

No punishing do’s and don’ts. No slavish obedience to tradition. How refreshing.

My first Kian cookbook foray was the sesame candied walnuts. Only four ingredients: walnuts, toasted sesame oil, sugar and sesame seeds. Easy, right? It should have been, if I followed his advice.

Like all cooking instructors, he wants us to measure and prep everything before turning on a burner, especially since melted sugar hardens almost instantly. But I didn’t listen and lost precious seconds pulling things out of the pantry. The walnuts suffered for it. Still tasty, though. 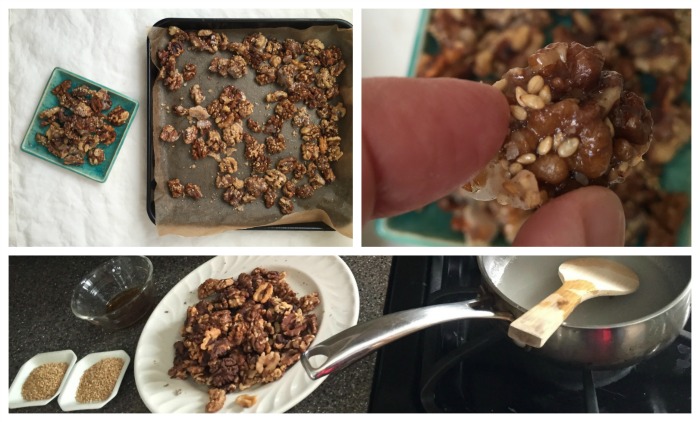 From here, I proceeded to the triumph of Kian’s shrimp and asparagus fried rice. With this dish, something clicked inside my brain. I stopped fight and gave myself over to the process. 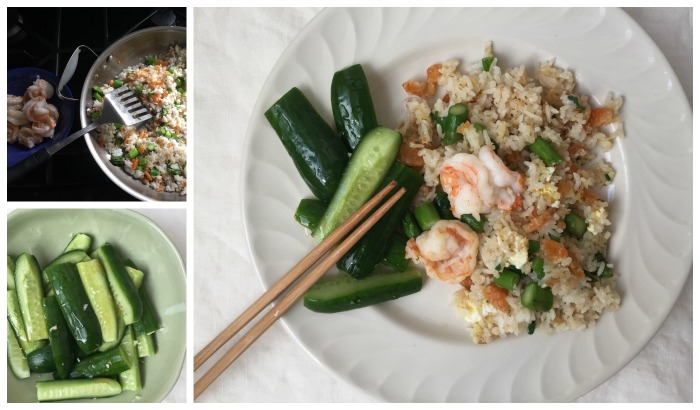 The craziest part of this recipe? Adding the raw, scrambled egg. This step called for clearing a corner of the hot pan, letting the raw egg hit the metal surface, and then quickly piling the rice on top of it. For the next few minutes, the whole mess cooked undisturbed on the stove. This allowed the eggs to cook through as flecks of rice browned, creating that signature caramelized fried rice flavor.

I made his rice in one pan, in less than 10 minutes! I was astounded. Even though I pride myself on keeping things simple, Kian’s brain systematized things down to a delicious science.

Kian’s family, originally from Fujian province in China, settled in Singapore. As a lad, he immigrated to the U.S. for his education at Boston University, where he earned both his bachelors and masters degrees in aerospace engineering. He also worked on Wall Street as a software developer before taking on his dream career as a professional chef.

Fun fact about Kian: He lives in a New York City apartment kitchen with limited counter space. This means he is super-organized. The counter below is basically his entire work surface. From this compact piece of real estate, he makes 10-course Chinese banquets for friends.

The other night, feasting went on for more than four hours because everyone insisted on snapping photos on our smart phones. Kian managed to squeeze in some Instagramming too (below left). His comment: “Look at this! Dinner guests behaving appropriately taking pictures of the food to please the host.” 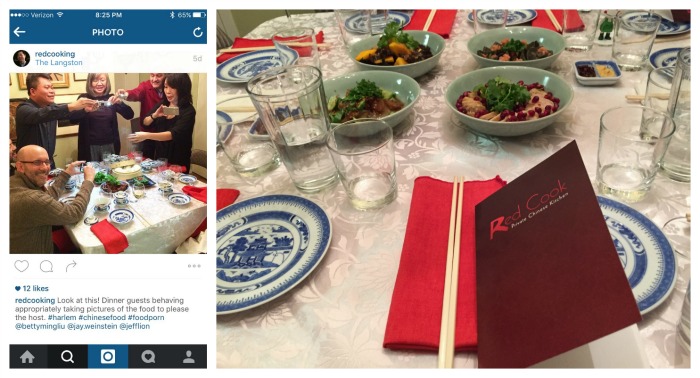 We ate and took pictures through nine more courses (photo below, from left to right, starting with upper left corner). Shrimp scallop with white wine sauce is in the book. So is the red-cooked fatty pork, which we assembled into sliders.

Red-cooking refers to falling-off-the-bones meat simmered in soy sauce, Kian explains in the book. The result is brown rather than red. But since there is no Chinese word for “brown,” the technique is called “red” because Chinese folks like the color red and consider it lucky. Next in the lineup on the top row: mustard greens with crabmeat sauce made with duck egg yolk, chicken stock and wine. 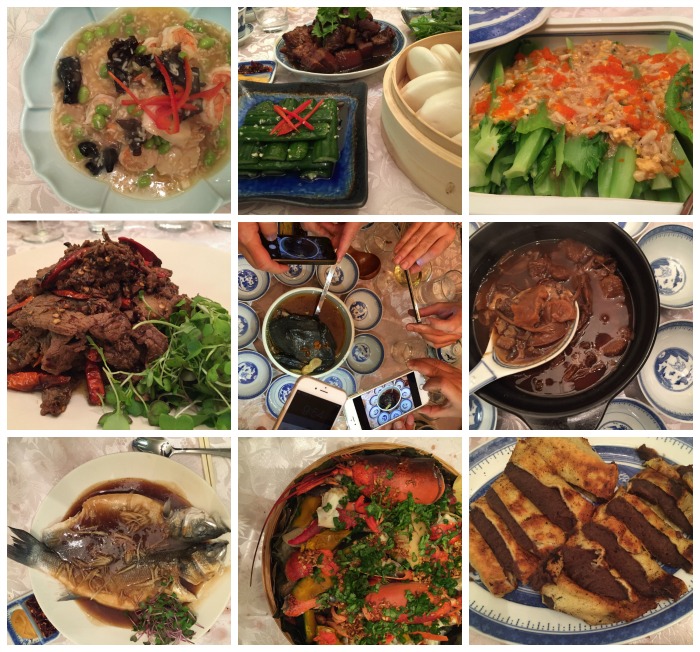 Second row of photos above: spicy, stir-fried lamb with cumin  (in the book); a clear herbal chicken soup made with a black-skinned chicken that is typically used in Chinese medicine; a thick, brown soup of abalone, sea cucumber and wild mushrooms (in the book). Last row: poached branzino with vinegar sauce; steamed sticky rice with lobster and pumpkin; sweet red bean paste pancake (it’s like a Chinese crepe).

Lucky me — at the end of the banquet, Kian autographed my copy of his book. He even finished off his signature with his traditional chop.

When you buy his book, you too can overcome any fears you’ve had about your Chinese cooking. Or is it just me acting weird? Let me know how you feel about cooking! This is a topic I can talk about endlessly. And thanks to Kian, we’ve got a delicious way to let go.