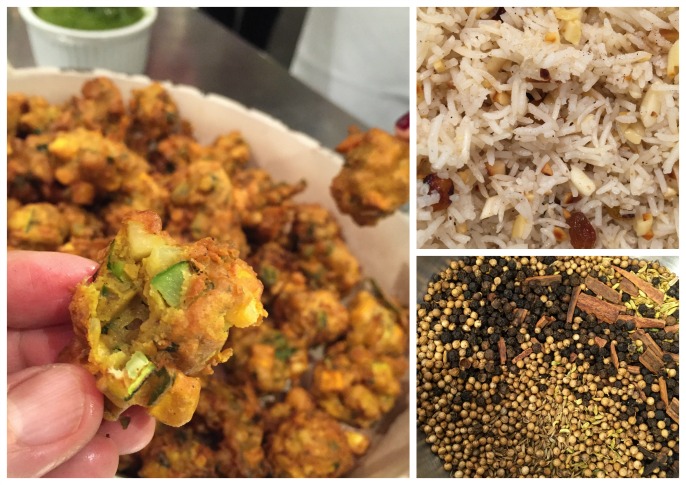 When my daughter and I take cooking classes together, the power struggle and bickering stops. Our generational divide closes as we surrender to the instructor and the magic of food. Our latest love fest? Indian cuisine.

The adventure also marked our first visit to the new digs for Institute of Culinary Education (ICE). This venerable cooking school trains professional chefs and also offers just-for-fun recreational classes for fans like us. During Spring 2015, the school relocated from Chelsea to the shiny Brookfield Place office tower at ground zero. This brand-new Lower Manhattan complex features high-end designer stores (Gucci, etc.) and a bunch of fancy cafes.

I’ve spent very little time in this neighborhood since Sept. 11, 2001; too many sad memories. But this latest visit updated me. Instead of devastation, there’s a forest of new skyscrapers with marble lobbies and Hudson River views. The scene is sanitized, corporatized, glamorized — and in its own way, revitalized.

Taking “Essentials of Indian Cooking” the other night offered yet another new outlook. My daughter Gabi and I signed up for this particular class because she loves Indian food, which I first learned to enjoy in 2010, during our fantastic month-long vacation to India. The delicious tour provided by Chef Daniel Stone took our appreciation to the next level.

Step by step, he talked our group of 16 students through a bunch of recipes. Then he divided us into three teams, with each team making a few of dishes. At the end of the evening, we sat down together and devoured EVERYTHING.

Chef Dan started off by emphasizing that India is a complex, diverse country with an equally complex and diverse culinary profile. At best, we were getting a greatest hits sampling of some popular dishes.

Masala, the Hindi word for “spice,” is a foundational element. Spices are so important that chefs believe in replacing their kitchen inventory every six months. In reality, even Dan’s own mother hangs onto her ground supermarket spices for ages.

To show us what we’re missing, Dan had us experimenting with spices that were either fresh or in the form of whole dried seeds, pods and bark. The array of aromas was remarkable.

I loved our results with pullao, aka basmati rice pilaf. We threw fragrant, whole cardamon pods and cinnamon bark into the pot with uncooked rice. (Slivered almonds and golden raisins were added just before serving.) Our team also made Punjabi garam masala by toasting a bunch of seeds — cumin, coriander, black peppercorn, fennel — along with ground nutmeg, crushed cardamon, crushed cinnamon bark and cloves. After roasting the whole mess in a pan and putting it through a grinder, we had an aromatic brown powder unlike anything I’ve ever smelled.

We used this divine mixture for our saag paneer, which finally demystified fresh Indian cheese for me. Making it is very ricotta-ish. Dan boiled milk, buttermilk and salt before straining off the curd. He shaped the milk solids into a loaf, wrapped it in cheese cloth, then firmed up the whole bundle for a few minutes in ice water before slicing. The cheese chunks pan-fried nicely.

Our version of saag paneer included strips of red pepper for color. By the way, it was hard to believe how much baby spinach we used — yes, an entire enormous bowl. After tasting our handiwork, I can’t go back to the greasy stuff served in most restaurants. They’re pouring on the oil as a substitute for pureed greens.

Another team made veggie pakora fritters, which were also a surprise. Once again, huge amounts of fresh veggies. The chick pea flour batter included diced cauliflower, onions, zucchini and sweet potato. Rounding out the mix were the spices: masala plus chopped fresh cilantro, parsley, purple basil and diced garlic. The cilantro and tamarind chutney dippings sauces were also made from scratch.

Whole wheat chapati was interesting. These round breads can be either fried into a dramatic puff that rise briefly before deflating, or, browned on a pancake griddle, which is tastier. 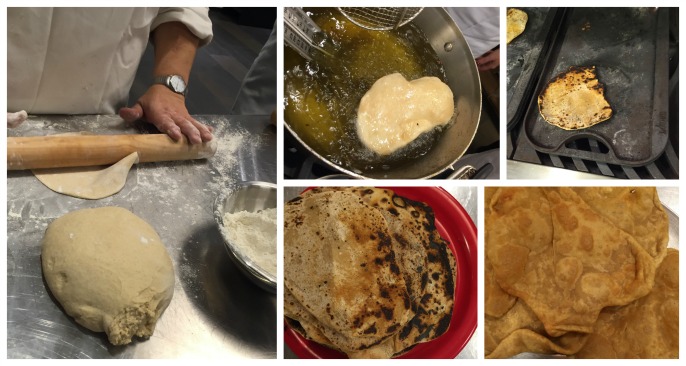 Our favorite dish was the chicken tikka marsala with its creamy, orange-colored sauce made of yogurt, heavy cream and tomato puree. Other winners in our celebratory meal included rogan josh (lamb in a garlic cream sauce), and chana dal (creamy yellow split peas). 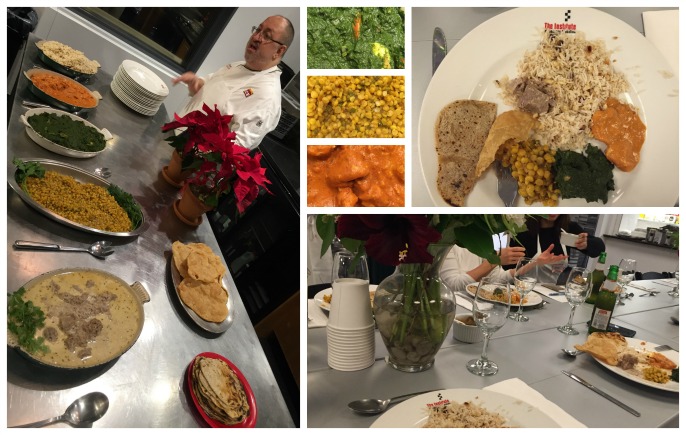 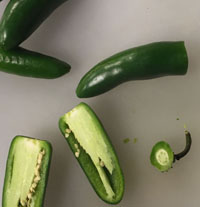 This class also taught me an important lesson about handling fresh jalapeños: Wear plastic gloves! As a spice novice, I cavalierly chopped at least NINE of these green hotties — bare-handed. No big deal, right?

Uh-huh. Well, by the time I got home that night, pepper hands set in. My stinging fingers looked normal but they burned, and burned everything I touched. While I survived brushing my teeth (pepper gums!), taking out my contact lenses set my eyes on fire.

This is when I used a trick that Dan mentioned in class: plain yogurt. I put a plastic sandwich bag on each hand, then dabbed soothing, cooling plain yogurt on each eye. Rinse, repeat….instant relief. Encouraged, I tried soaking my hands in yogurt, which proved useless; it took another 24 hours to get them back to normal.

I’ve always loved learning about other cultures through food. While I adore reading international cookbooks, nothing compares to the hands-on interaction of preparing a bunch of recipes, all at once. At $115 per person, this class was a treat that made me feel more emotionally connected to my Indian friends and Indian culture.

And of course, there’s the first-rate mother-daughter bonding over food. Our group actually included other moms with their adult children, along with couples, siblings and pairs of friends. Singles, don’t worry. You won’t be left out. I take plenty of these classes solo. The friendly team approach is standard and keeps everyone involved.

This was the third cooking class for Gabs and me. It’s becoming our new tradition. Our two earlier forays, which were also at ICE, had us exploring baking vegan desserts and making gluten-free pasta. We recently squeezed in a fourth class, on Thai cooking. I’ll have photos of that one up soon.

The bottom line? This class ruined our ability to eat out at most Indian restaurants. We look forward to serving up some of these treats together, at home.

If you have cooking tips, experiences, feedback (pun intended) or suggestions, please let us know!