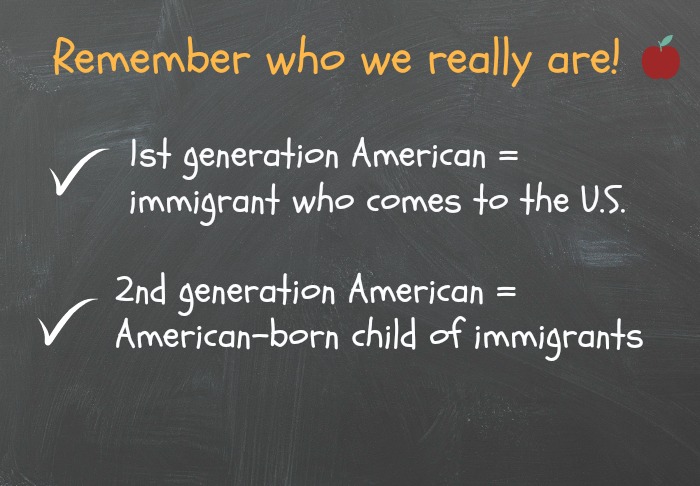 I am SO ANNOYED. When will people get this straight??! If you’re an immigrant to this country, then you’re first generation. If your kids are born here, then they are second generation. So who are you — first- or second-generation?

This is really important because of the hating on immigrants. Most people wrongly assume that the American-born child of immigrants are the first-generation American. Well, let’s take a minute to think about that: If American-born kids like me are first gens, then what are my immigrant parents? Are they the zero generation, with zero identity? Which leads to my pet peeve…

Immigrants must claim their rightful status as first-generation Americans. That’s who they are, even if they never naturalize as American citizens. This how immigrants are legally defined in government statistics and research by our nation’s best scholars. But our racist society and ignorant pop culture insist on discriminating because it gives them more power. They believe they have the right to get it wrong.

So it’s up to second gens like me  and you to speak up on this topic. We need to remind everyone that our American roots go a whole generation deeper than what people think. A family generation is defined as 25 to 30 years. That means our immigrant parents and loved ones have already made decades of personal sacrifices and invested billions of dollars in building this country.

Immigrants deserve their place at the table as the first generation. To accept anything less is to accept that immigrants are forever outsiders. And by extension, American-born kids like me feel marginalized. On the fringe. Wondering if we really belong here.

The United States is our country, our home. As immigrant families, we need to be seen and heard for our contributions!

And, our numbers keep growing. New research shows that 45 million immigrants live in the U.S., including 11.3 million who are undocumented. Add in their kids who are born here and we’re talking about an additional 37 million Americans. One in four people who live in the U.S. are either first- or second generation.

White, non-Latino America is at an all-time low of 65%, according to a new PEW Research Center report. By 2055, whites will no longer be a majority and no single racial or ethnic group will take its place. And by 2065, one in four people living in this great country will be Latino.

For the past 50 years, Latinos have been the fastest-growing immigrant group, accounting for 47% of all immigrants. But issues like the crackdown on undocumented Mexicans has slowed the Latino community’s overall expansion. This is true whether we’re talking about the first- or second-generation.

Meanwhile, Asian immigration hit a historic high in 2013, accounting for 41% of all new immigrants, the study found. The influx now makes people of Asian heritage 6% of the U.S. population. In the past, generations of Asian immigrants came to join relatives who were already here. But recent arrivals, who tend to be educated, come to work in white collar jobs.

A few days ago, another new report was released by a team of scholars. They pulled together more than 400 pages of fresh material at the request of the feds. Here are interesting facts from that study:

Another related fact in the report: The longer immigrants and their kids stay in this country, the more they start looking like everyone else. Heart disease rates, crime rates, rates for children born to unwed moms — these numbers eventually tick upward. This is the downside of becoming either first- or second-generation American.

These major immigration studies are coming out now to mark the 50th anniversary of the breakthrough Immigration and Nationality Act of 1965. This law overhauled a racist system that favored white Northern European immigrants and limited everyone else to strict quotas. After 1965, immigrants from Asian, Africa and Latin America came in ever-larger numbers.

Our complex history demands an understanding of our generational relationships. Using accurate definitions becomes a wonderful weapon and tool for making us instantly more American. We can count more. We need to be counted. Being counted is a source of strength and power.

Too bad my parents died before they could witness this extraordinary time in America. But I am here to bear witness and collect our stories.

My dad immigrated from South Vietnam and my mom, from China. They were both naturalized citizens and were very proud to be American.  Me, I’m born in New Jersey.

Just to make sure we all understand the first-or-second generation thing, consider this next scenario. Even if Mom and Dad never became naturalized citizens, I am still second generation. Between them and me, we have been here for two generations of contributing, sweat, love and taxes to help build this country.

To clear up any remaining confusion, here is a definition for “second generation” from the government’s U.S. Census Bureau website:

If you haven’t overdosed yet on all this data, here’s one more study worth considering. America’s second generation is incredibly diverse, according to a 2013 PEW Research Center Report on second-generation Americans. More than 20 million second gens are adults. The majority of us — seven out of every 10 second gen adults — are either Latino or Asian American. We tend to be better off financially and have more education than our parents. We are most comfortable speaking English. Our marriage partners and friends often come from outside our ethnic group. We also tend to think of ourselves as “typical American.” Of course we are!

Let people know who you are

I hope you’ll share this post with people who will celebrate our belonging, as well those who are misinformed. Sadly, we have a lot people who are getting the second gen issue wrong, including journalists. Even top news organizations make mistakes. All. The. Time.

So… are you first- or second-generation American? Claim your cultural rights. Think of what our parents and relatives went through to get us here. Let’s respect them. And, ourselves.