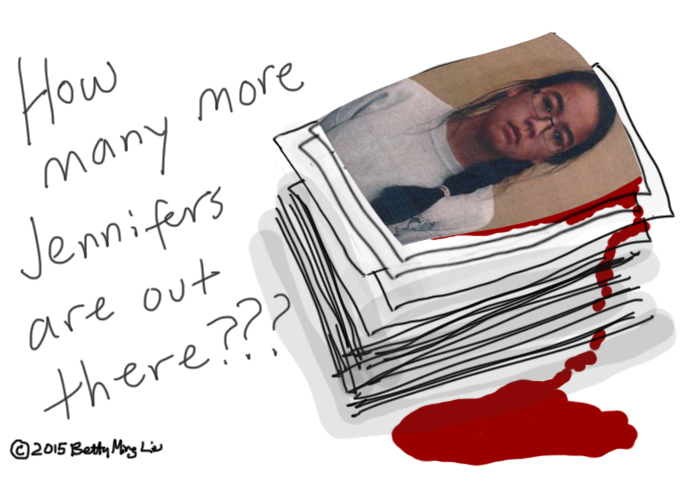 Jennifer Pan’s parents pushed her to be the perfect daughter. But once she grew up, she hired hit men to kill them. Her story is about more than girl gone bad. Asian family values are detonating in the 21st century. And we must do something about it. 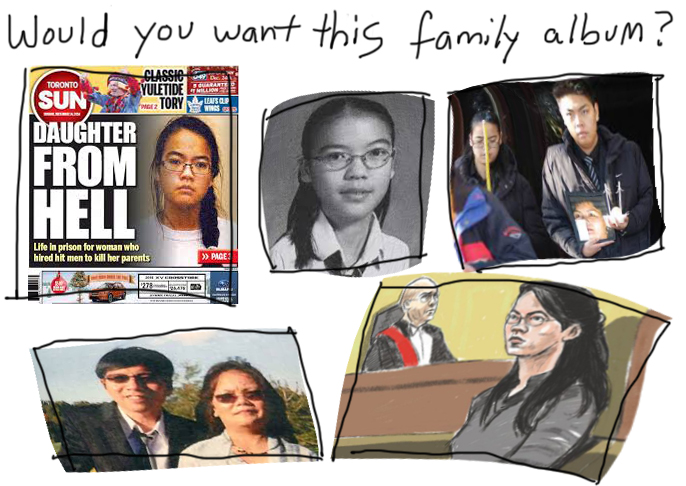 I found some research studies that might help us understand what’s happening. But first, a brief summary of Jennifer Pan’s disturbing tale: The parents were ethnic Chinese political refugees from Vietnam. They resettled in Toronto, Canada, met, married, had two kids, Jennifer and Felix). The Cantonese-speaking couple, both workers in an auto parts factory, scrimped to buy a house with a two-car garage. Plus, a Mercedes for him and a Lexus for her.

Jennifer started piano lessons at age 4. The control freak dad tracked her studies and after-school activities. Figure skating lessons led to Olympic dreams — until a knee injury. Eighth grade hopes of being class valedictorian evaporated too. Jennifer started cutting herself. Her grades nosedived into mostly Bs, except for music, which was her best subject. She failed calculus and didn’t graduate from high school.

And her parents didn’t know. The clever, fearful daughter crafted fake report cards. She made excuses about not attending graduation. The parents thought she was commuting to classes at a nearby university pharmacology program — Dad’s dream for her. In reality, she was hiding out at a public library downtown. The Chinese-Canadian boyfriend was another secret. Finally, confronted by her suspicious parents, she confessed. The father put her on lockdown. The daughter hired contract killers.

On Nov. 2, 2010, three gunmen walked into the Pan residence and shot the mother dead. The father survived with broken bones and bullet fragments in his face. Jennifer, 24 at the time of the incident, was sentenced in January 2015 to life in prison, along with the boyfriend and two of the gunmen. They all plan to appeal.

Details of Jennifer’s horrifying, elaborate farce make for a riveting read in Toronto Life magazine. The story was written by Karen K. Ho, a daughter of Chinese immigrants who went to school with both Jennifer and the boyfriend.  Her description of Jennifer: “A social butterfly with an easy, high-pitched laugh, she mixed with guys, girls, Asians, Caucasians, jocks, nerds, people deep into the arts. Outside of school, Jennifer swam and practised the martial art of wushu.”  As for life with a dad who forbid dating or parties: “By age 22, she had never gone to a club, been drunk, visited a friend’s cottage or gone on a vacation without her family.”

Judging by the hundreds of online comments for this Toronto Life article, many readers relate to the issues presented by the Jennifer Pan story. Raise your hands if you do too. Definitely, count me in. My father was also ethnic Chinese from Vietnam. I was supposed to study hard for medical school. Free time was for more studying or going to church. No parties. No non-Chinese friends. I commuted to a nearby college and lived at home. Dad picked all my classes. He wouldn’t let me sign up for writing or English lit. Cs and Ds littered my transcript, which was heavy on business courses. I saw no way out.

Then, when I was 19, a fatal heart attack took my dad. Eventually, I found my way to a writing life. The path included tons of therapy. For me, the only way to heal was to figure out ways to get the love and happiness I never had. Lately, I’ve been combing through hundreds of research studies for a book I’m writing about my experiences. Through the decades, all the studies make one point, over and over: As a community, Asian Americans do not seek enough mental health counseling.

Facts & findings from the experts

Many reasons stop us. Since Asian family values emphasize collective decision-making, parents have both first and final say. The problem starts right there. Because of the cultural stigma attached to mental illness, going to therapy is an act of shame. Other problems keep people away too, especially among the poor — they might lack health insurance, transportation options and English language skills.

The professional articles I’m reading also point to a culture gap between the community and American health care providers who are unfamiliar with our history and how we’re wired. Thankfully, studies show that health care providers who learn about the community can make a difference. In recent years, psychologists have also found Asian Americans more willing to discuss depression; the subject is not totally taboo anymore.

Our ability to open up makes more research possible. Scholars and experts are piecing together a profile of who we are today. Here are highlights of some studies that speak to me:

Fact #1: Research consistently shows that immigrant parents of all cultures are stricter with daughters than sons. Very often, girls are not allowed to party or spend time with friends after school. They usually have more family-related duties that keep them home. Parents, meanwhile, struggle in their marriages. Working wives achieve levels of empowerment that threaten old world, man-is-king dynamics. Husbands who feel emasculated compensate by bullying their wives into obedience.

Fact #2: Self-injury is a growing problem. I’m hearing about it more often but found only one relevant paper on this topic. Female students of Asian heritage at Canadian universities are turning to cutting. Like their white counterparts, they self-injure in a struggle to manage their emotions and personal relationships. Difficulties with parents, peers and suppressed anger are common, according to a 2015 study by Simon Fraser University Researchers.

Fact #3: When it comes to suicide, young Asian Americans are clearly distressed. Overall, Asian American adults who are 18-34 think more about suicide than any other age group within the community. Those who are 20-24 have the highest suicide rates. From here, it gets worse: American-born women of Asian heritage think about suicide more than anyone else in the country. Asian American women who are over 65 have the highest suicide rates in the entire nation. Interestingly, Asian American men trend in the opposite direction; they kill themselves at rates lower than those on record for white men (whiteness is the standard against which other groups are measured in a majority of studies).

Fact #4: Chinese parents — especially those who have been in the country less than a decade — are reported for physical child abuse at rates higher than the general population. Widely accepted traditional disciplinary practices include shaking vigorously and leaving marks, which are common signs of child abuse, according to a 2014 study by Johns Hopkins University nursing experts. But you don’t have to lay a finger on your kids to abuse them. Isolating a child or withdrawing attention (the silent treatment) for extended periods are also forms of abuse. Remember how it felt when your parents froze you out? I do.

Fact #5: Chinese parents lie quite a bit to control their kids. A 2013 survey compared parents in China to their peers in the U.S. (The mix of American parents was majority white but 15.5% were Asian American.) Most parents copped to making this specific threat: “If you don’t come with me now, I will leave you here by yourself.” But Chinese showed a sharply higher rate of lying to kids to influence their behavior. (E.g., “If you don’t behave, I will call the police.”) Still, parents in both countries said they wanted to raise moral kids who told the truth.

These studies are reflected in the Jennifer Pan’s sad story. She had the strict dad, the bullied mom who didn’t fight for her, the isolation, the self-cutting. Her brother, according to the Toronto Life story, is out on his own and suffering from depression. We don’t know about suicidal thoughts or if the Pan parents lied to their kids. But these topics are worth thinking about in the larger context of how we either lift up or destroy ourselves and our kids.

Solutions to break the cycle

The Pan family tragedy reminds me that I’m carrying around baggage that needs to go. Way too often, I catch myself in the act of torturing those around me. Definitely, it’s time to change some more, to get more unconditional love and happiness into my life. So here’s what I’m doing to break the cycle:

Solution #1: Give more hugs and kisses. Two years before my mother died, I felt emotionally open enough to reach out and hold her hand. She was 90 and I was 51. The awkwardness eventually passes. We enjoyed sitting together and holding hands, comforted beyond words.

Solution #2: Say “I love you” more often. Words still matter. I was too angry at 19 to talk to my dad. But my mom and I learned to say it to each other all the time. We said it to each other right up until the day she died at age 92. “Love you” is the standard “good-bye” when I talk on the phone to my daughter and bf.

Solution #3: Shut up when people are talking. If someone tells me that they’re nervous or unhappy, I’m itching to either fix things or snap them out of it. If they share their plans, I jump in with suggestions. No! Stop meddling. Leave everyone alone. Just listen. The ability to accept their feelings and ideas is an exercise in unconditional love.

Solution #4: Celebrate my family and cultural heritage. I have great childhood memories of delicious family meals in Chinatown. As an adult, I discovered Chinese herbal medicine and acupuncture. I also love dusting off forgotten moments in Chinese American history and exploring what they mean today.

Solution #5: Take life and love a day at a time. Traditional Asians think long-term and big picture. By elementary school, I was told to prepare for my future as a doctor. Once I realized I had other options as an adult, I started living in the moment instead. Day at a time. There is only today, this moment.