A new experience: For the first time ever, I carried a sign and participated in a march. It was liberating, necessary and — now that I know what marching feels like, it will certainly happen again.

Why now? Guns. I’m heart-broken and furious about the killing going on in this country. Every day brings new headlines about the murder of our little children and adult children. I had to do something.

So this morning (Saturday, May 9th), I hung out with Moms Demand Action for Gun Sense in America. It was the moms’ 3rd annual march across the Brooklyn Bridge. We started out at 10 a.m. It took about half an hour to make the one-mile walk to a rally at City Hall.

Growing up in Chinatown, I used to love walking across this beautiful bridge. I hadn’t done it in decades. What a memorable way to update my references by walking it again today as part of a new community. We were a marvelously racially diverse crowd of women, men, kids and babies.

While the crowd was heavy on New Yorkers, I spotted a woman from Tennessee and chatted with a woman from Rhode Island. There was also a sizable contingent from Newtown, Conn., scene of 2012’s deadly Sandy Hook Elementary School shooting that murdered 20 children  and six staffers. 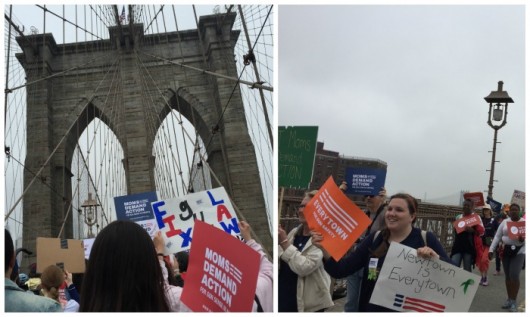 Someone handed me a sign and I took it. The shape on it is a quilting square. It refers to the Moms Demand Action quilting campaign to make squares commemorating every child who has been killed by gun violence. Read more about this project here. 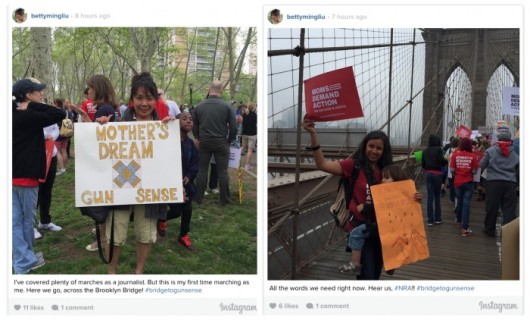 In 2014, Moms Demand Action won me over with its boycott of the Kroger supermarket chain. The retailer has a terrible store policy. Customers can carry guns but they can’t carry in ice cream cones or skateboards, or walk around shirtless either. The points are cleverly illustrated in the Moms Demand Action ad campaign:

I am impressed by this campaign, which you can read about here. It takes money to come up with something like this, which is important to mention. FYI: The moms have financial backing from former NYC Mayor Mike Bloomberg, who is spending millions on trying to build grass-roots support for changing America’s gun laws.

Fighting for stricter gun safety laws is a very tough battle because the National Rifle Association is so powerful. But keeping the issue on everyone’s radar is a place to start. That’s why I decided to march. One of the organizers told me that about 300 attended last year’s Brooklyn Bridge walk. She said that this year, 700 rsvp’d and 500 were counted. Definitely progress. 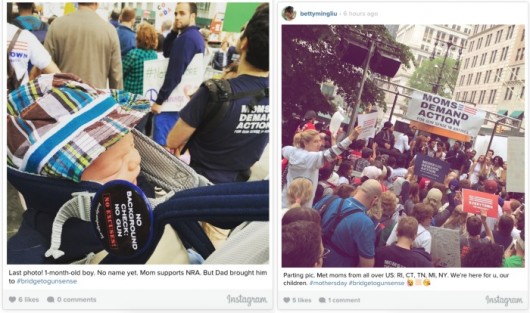 I also got a kick out of spotting Donna Karan, who took a bunch of photos with her smart phone. Since she’s always been one of my favorite fashion designers, I was touched that she gave each of us a black leather wraparound bracelet embossed with the words “NOT ONE MORE.” She usually sells them for $30 via her Urban Zen foundation, with half the proceeds going towards Bloomberg’s effort. Not one more. We can’t afford to lose another child to gun violence. Not one more.

The march made this a very special Mother’s Day weekend for me. If you’d like to know more about Moms Demand Action, check out momsdemandaction.org.

And, have a wonderful, wonderful Mother’s Day. Hold the children close. xo.

P.S. — I went to a second Moms event in 2016. We canvassed the Democratic Convention in Philadelphia: “Fighting for Hillary with Moms Demand Action.”