I began the Year of the Sheep by making a painful decision about Lucky, our ancient cat. My first act of the new year was to put him to sleep. Dealing with death is considered a no-no during such an auspicious holiday. But Lucky was a black cat with great vibes, enough to overcome Chinese superstitions. Besides, I miss him. Talking about him makes me feel better.

About 18 years ago, Lucky was a scared, injured, tiny black ball of fluff. Someone evil had sliced the through the achilles heel of his foot with a razor before tossing him to the side of the road. Then someone kind brought him to the local animal shelter. That’s where I met Lucky, gave him his name and took him home. At the time, my daughter was tiny too, barely walking and talking. Her dad and I were still married. Our young family seemed solid.

My mom though, was ailing. If the diabetes wasn’t bad enough, she’d recently been hit by a truck, leaving her legally blind and lame in one foot. Lucky’s sad story helped her rally. He became her gentle lap cat. They limped together around her Chinatown apartment until my mother needed 24/7 nursing home care. That’s when Lucky moved in with my daughter and me.

By then, I was divorced. We eventually brought in two more cats. Since these fellow felines treated Lucky like a third wheel, he stuck close to the humans. My daughter was his favorite. From grade school on, he sat with her as she did her homework, slept with her at night and amused her friends. 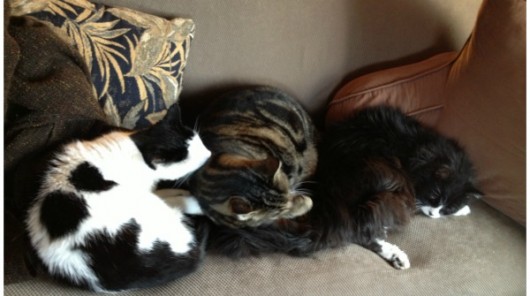 When she reached high school, Lucky struggled with being a senior citizen. The younger cats bullied him, which pissed him off. Literally. He took to peeing in random places: the newspaper recycling bin, the kitchen rug, my sneakers. To save our shoes, we began hiding them in the front hall closet. Meanwhile, the vet prescribed a daily Valium for Lucky.

He had geriatric health issues too. The thyroid surgeries. Prescriptive cat food for his failing kidneys. He shrunk from a big, furry, 15-pound cat to a skinny, 7-pound bag of bones. Still, the old boy loved to feast. Groceries and leftovers were never safe. The little thief would run off with everything from bagels to chicken legs.

But he got finicky. Last week, he hardly ate at all. His heartbeat had turned erratic, thumping like bongo drums. The other night, he had a terrible, terrible seizure. That’s when I knew it was time.

The morning after his convulsions was even more dreadful. I took one last photo of him lounging on my bed. As always, he purred as I picked him up. 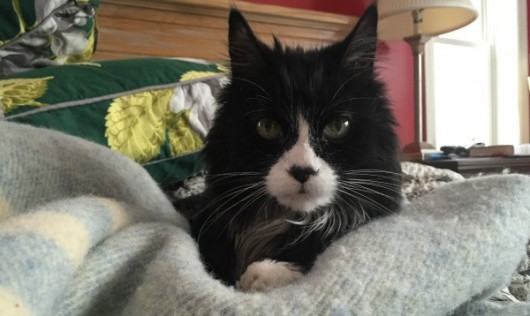 My friend Jan drove us to Dobbs Ferry Animal Hospital, where the great staff has always tended to our critters. Between the ride and waiting for our appointment, Lucky spent about an hour cuddled in my arms. Since my daughter was away at college, I had him wrapped in her baby quilt and one of her scarves. She had instructed me to pet him a lot and tell him that we loved him. I did.

That last hour was the most quality time we’ve had in years. His elder care needs were behind us. The only thing that mattered was the pleasure of being in the unhurried moment. Trying to make it last…

As Jan drove me back home, she asked if I was familiar with Oliver Sacks. Of course! He’s the famous and famously quirky NYU neurology professor who writes books about his patients. Robin Williams played him in the movie, “Awakenings.” Well, that morning, Sacks had an op-ed piece in The New York Times. Jan suggested that I give it a read.

For starters, reading gave me something to do in the unfamiliar quiet of my house. Lucky did not meet me at the door, meowing for attention and tripping under my feet. I kicked off my shoes and left them there, with no worries about finding them soaked in pee.

Sacks’ splendid essay read like something Lucky would’ve written if he could. The piece was all about the 81-year-old author’s terminal cancer. Things had just gotten worse. He only has a few more months left on this earth.

The whole article got to me, especially these lines:

Over the last few days, I have been able to see my life as from a great altitude, as a sort of landscape, and with a deepening sense of the connection of all its parts. This does not mean I am finished with life.

On the contrary, I feel intensely alive, and I want and hope in the time that remains to deepen my friendships, to say farewell to those I love, to write more, to travel if I have the strength, to achieve new levels of understanding and insight.

This will involve audacity, clarity and plain speaking; trying to straighten my accounts with the world. But there will be time, too, for some fun (and even some silliness, as well).

Lucky had traveled a huge, deep distance with us. Like all beloved pets, he was intensely alive. He shared in the warmth of our nuclear family and got us through the divorce. He comforted my mother as her health fell apart.

Our friends were his friends. An odd ball with a stern look, he loved kids and could make them laugh. During my daughter’s turbulent teen years when we argued about everything, he was Switzerland. We could trade stories about the silly things he’d done that day and share an uncomplicated laugh.

Unlike the human child in the house, who grew up, Lucky matured to physical adulthood without personality changes. He was always happy to see us, glad to be patted and held. He never grew up. Although, unfortunately, he grew old.

That was the down side for Lucky. With no natural enemies, he lived far, far beyond his allotted nine lives. In the wild, he would’ve been lunch for a hungry predator ages ago. He never would’ve suffered the failing organs that come with old age. Mortality is tough.

But lucky for my mom, he’s gone to her just in time for their celestial celebration of the lunar new year.

Together, they are among the growing ranks of the dead who are important to me. I am beginning to think of them as my personal, customized ancestors. This is a major attitude shift because I hate the idea of Chinese ancestors controlling my destiny. Now, as I lose more of my aging, doddering loved ones, I want to keep the dead close by. Ancestors — not a bad concept after all, especially if they are loving and have got my back.

In February 2010, Mom died at age 92. In 2013, it was Rosebud, my little old lady of a rescue dog. Last month brought the colorful rituals of a Buddhist funeral for my 90-something aunt. She was the baby sister of my dad, who died 40 years ago. She was the last of his living siblings. The end of an era.

Lucky’s departure has opened up a huge hole in my life. On the positive side, there’s much less stress. No more early morning scratching outside my bedroom door, demanding me to get up. No need to deal with Valium, cat bullying, cleaning the extra litter box, and vacuuming furry black dustballs. No more sounds of me cursing because I’ve stepped into a random puddle of pee.

The old boy and I are both at peace. That’s good because this year is going to be very, very busy. One project is the redesign of my blog. The makeover will probably take a few months. With Lucky’s passing, I already know I have to change the illustration I was going to use as part of my website’s new look. I had been thinking of something like this: 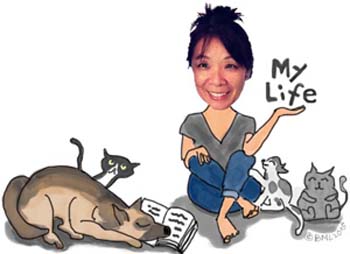 Except, now I have to erase Lucky, which hurts: 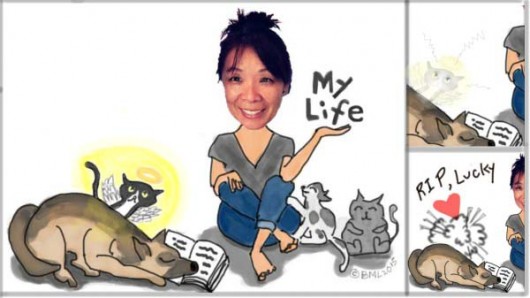 (By the way, if  you’re wondering about the big dog…he was a part of a package deal. In order to get him, I had to take in his human, my bf of the past 16 months. More on them another time because I haven’t figure out how to write about our relationship. Yes, I am finally at a loss for words and ideas, at least on that topic.)

Sooo, the pack is reorganizing. Lucky is gone. Yet, like all the ancestors, he hangs around in my heart, my history, my thoughts. How lucky for me.

Love you, old boy. Miss you. Will never, ever forget you, or what you taught me. You trained me well.