What are the economic realities of being Asian American? For the many answers to that question, a new report was released today. It’s filled with interesting details, including comparison numbers for Latinos, blacks and whites.

With a population of 17 million, Asian Americans account for 6% of the people living in the U.S. — as well as 6% of the nation’s businesses and work force.

Here are a few report specifics that made me say “wow:”

The 46-page report has a glossy cover and a long name: “Making America Work: Asian Americans, Native Hawaiians and Pacific Islanders in the Workforce and Business 2014.” It explores three main areas:

If enjoy looking at charts, the report has a bunch. Here ‘s an example of what you’ll see: 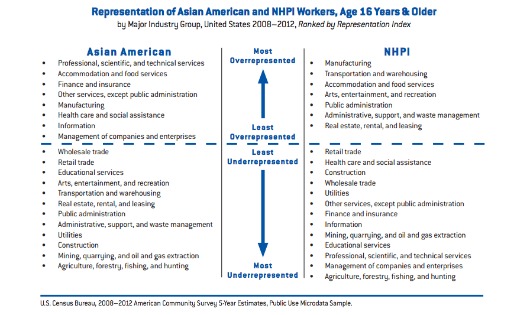 Much of the basic data used in the report has been floating around in random places for a while. But analyzing the stats and pulling everything together in this new publication provides a fresh, informative and reader-friendly perspective.

Most of the numbers are from government sources, especially the U.S. Census. The downside of this is that the Census doesn’t really have a category for Middle Eastern folks, which means the stats on this group of Americans is weak.

But the demographics on Asian Americans are getting better, more comprehensive. A study like this can help the community gain visibility in the numbers game. Its goal is to arm community groups with data they need to organize politically, bootstrap local businesses and tap into government grants, according to Howard Shih of the Asian American Federation. In a demonstration of bi-coastal solidarity, AAF co-published “Making America Work” with California’s Asian Americans Advancing Justice-Los Angeles.

I think the report will also be useful to regular citizens who want a snapshot of what Asian America looks like. Students will like it too, as will marketing types .

The report was unveiled this morning in midtown Manhattan at a presentation for about 50 community leaders. The event also included a panel discussion. Once people got talking, they wouldn’t stop because they were passionate about the issues. Thankfully, MSNBC news anchor Richard Lui moderated. As a guy who appreciates a 10-second sound byte, he kept things moving.

With the lively pace, I learned a few more interesting facts about life in an America fueled by immigrant growth. It reminded me of how much things have changed from my Chinatown childhood. And yet, many issues remain the same: The constant influx of new arrivals makes for a rough, raw culture. Without citizenship, access to political clout and government resources is a difficult. There’s also a tremendous need for English language training.

I could keep going on and on too! But I’ll stop after sharing a few morsels from the panel, which focused on New York City trends:

Okay, okay — I’ll stop now. I hope you’ll share this post and download a free copy of  Making America Work: Asian Americans, Native Hawaiians and Pacific Islanders in the Workforce and Business 2014. Lots to think about.