The pictures are from a vegan dessert baking workshop that I took with my daughter Gabi. We enjoyed making these goodies — and then, stuffing ourselves with them afterwards.

Let’s start with your first question…What is a vegan? Vegans are animal lovers who do not eat meat, fish, milk, eggs or cheese. They feel animals should not be killed for food, nor should they labor to produce food for humans.

Vegans will not touch honey either, because it is made by bees.

No eggs. No milk. No butter. No honey. And, vegans can’t use regular sugar either!

The sugar issue: Conventional sugar manufacturing involves bone char. Bone char is the charcoal that results from burning the bones of animals, usually cows. The vegan alternative to Domino’s is actually easy. Any sugar labeled “organic” is fine.

There are also stand-ins for all the other ingredients. We learned about them when we went into Manhattan for a  four-hour “Vegan Desserts” baking class at ICE — short for Institute of Culinary Education.

She’s the talented pastry chef for Blossom Du Jour, a chain of three casual vegan eateries in Manhattan which also supplies its baked goods to Whole Foods. The operation includes the Blossom restaurant in Chelsea.

Quinn’s expertise made her a fantastic instructor. We also liked her look: ring piercings through each nostril. Baking measurements tattooed on her fingers. She said she removed the lip piercing because it was too much for her father. Aw! More about parents later…

Quinn, a vegan, made three key points about vegan baking:

Vegan baking is scientific and demands tons of experimentation. “In baking, you really have to follow recipes because everything is based on reactions — especially with vegan baking because there are so many substitutes,” Quinn said.

The goal is to make a product that does NOT taste vegan. It must be delicious to non-vegans; that’s the authenticity test.

“Vegan baking doesn’t necessarily mean healthy baking,” said Quinn. Like regular desserts, the vegan version is loaded with sugar and fat. Unless a recipe is specifically gluten-free, her desserts use wheat flour.

Quinn’s “go-to” product for most recipes is Earth Balance, a butter substitute made from palm fruit, canola, flax, soybean and olive oil. One tablespoon is about 100 calories, similar to cow butter. And man, we used a ton of Earth Balance baking sticks in class.

We worked in teams of two, with each team making a recipe or two from Quinn’s personal collection. (Which means no secrets from the Blossom Du Jour bakery; we’ll just have to keep going there for the popular vegan croissant.)

My daughter Gabi and I were baking that day with our friends Dana (the daughter) and Marcelle (the mom).

Each mother-daughter team made a Vegan Apricot Frangipane Tart.

Since vegan doughs can be on the dry side, our secret ingredient in this one particular recipe was vodka. The liquor gave wetness during the dough-making process. But the alcohol evaporated while baking:

P.S. — I took home the leftover dough and made it into delicious shortbread cookies. :)

As for other recipes in the room…

These buns were everyone’s favorite. At the end of class, they were the first treat to disappear.

You would never guess that Vegan Raspberry Lemon Cupcakes were vegan. So delish. Vegan cream cheese made for an amazing frosting:

Vegan Banana Peanut Butter Cheesecake had two crusts. The bottom was a graham cracker crust. Sitting on top of it was a crust made of shredded coconut, almond meal, canola oil and agave. Once again, vegan cream cheese was a miracle topping:

Vegan Blueberry Bundt Cake only looked demure. Its main ingredients were lots of sugar, both white and brown. Vegan butter kept it moist:

Vegan S’mores Pie relied on Ener-g egg replacer for the topping. Made from potato starch and tapioca flour, it whipped into a reasonable facsimile for a merengue made of chicken egg whites. But the flavor? Not so much. Still, I loved the crust made of walnuts, shredded coconuts and dates.

In keeping with the spirit of experimentation, the S’mores team baked the leftover crust into sticky cookies. I rolled a few of the cooled cookies into little balls and found them charming. If you ask me, they make an excellent — and quite healthy, gluten-free alternative — to truffles.

ICE classes always end with eat and drinking. Over wine and Bellini champagne cocktails, we compared notes on our experiences. Of course, we had to take photos with our smart phones. Hello, Instagram! 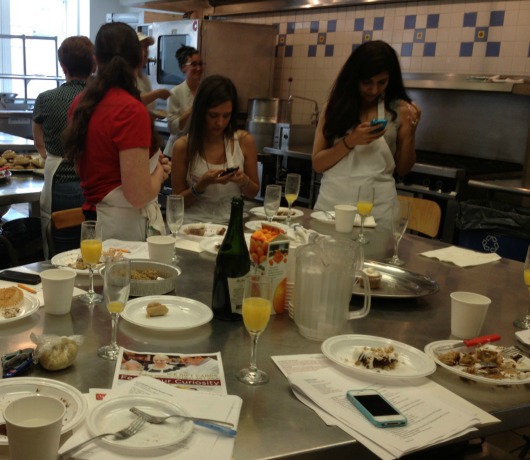 This was the second cooking class that Gabi and I have taken together at ICE. Cooking classes are great for mother-daughter bonding. With a teacher in charge, control issues are out of our hands and we become peers. No bickering, no arguments — at least, not for a few hours. Read about our gluten-free pasta class at ICE.

I’d also like to give a a shout-out to my former NYU “Food Writing” student, Dana Mortell. What a surprise. Wasn’t expecting to see her but she walked into the middle of our vegan dessert workshop…

Small world — she’s working at ICE as the assistant education coordinator. Her job was to take pictures that will be used to promote vegan dessert-making. Seeing Dana as a college graduate and full-time working woman was definitely the icing on my cake.  :)