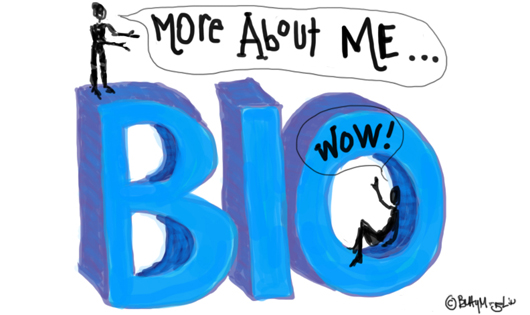 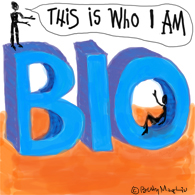 When I talk to my students about how to write a bio, they groan. Everyone hates writing bios. But if you’re going somewhere in your life, at some point, you will need that bio. Really, you can do this. Even though folks find the process intimidating, my basic how-to’s can help you out.

In my writing classes, the first assignment is often a bio. Students struggle because a) they worry about sounding like show-offs, b) they have nothing worth saying, c) they dread coming off as boring, or d) all of the above.

The truth is, the issue of how to write a bio depends on one thing: Remember to be your natural, wonderful self. In other words, be real. If you stay genuine in word and tone, the bio will be terrific.

Once you’ve figured out how to write a bio, how will you use it?

Trying to be clever is very stressful. So forget about that.

Just relax. The goal is to write in a way that’s simple, clear and informative. Remind yourself that this particular bio is just for now. You might change it again tomorrow or in a year. The bio changes as you grow.

Begin by taking stock of your life and jotting down the following:

Once you have these essentials down, start prioritizing. There might be facts that you want to keep private. Or maybe, you feel they’re not relevant to your basic bio. It’s time to pick and choose.

Next, decide what kind of bio you’re writing.

What kind of bio do you need? When we think about how to write a bio, we have multi-task. Most people have several different bios. It all depends on the occasion.

1. Super-simple: The bio blurb is just a paragraph or two. Keep it brief. For instance, check out my about me page. At the end of the long-ish bio, you’ll find a short-ish blurb.

2. Going deep: The comprehensive bio is the other extreme. For a look at this type of bio, go to the encyclopedia website Wikipedia and search for someone important and/or famous. These Wikpedia entries are usually loooong and detailed.

3. One size fits all: The typical bio is a summary. This bio is fairly short and concise. It highlights information you consider important.

You might know Steve Martin as a Hollywood actor who starred in a bunch of comedies. But he’s also a writer. In 2010, he published a novel, An Object of Beauty, and wanted it to be taken seriously. So on the flap inside of the book jacket, he included a very serious bio:

Steve Martin is a legendary writer, actor, and performer. His film credits include “Father of the Bride,” “Parenthood,” “The Spanish Prisoner,” and “Bringing Down the House” as well as “Roxanne,” “L.A. Story,” and “Bowfinger,” for which he also wrote the screenplays. He has won an Emmy for his television writing and Grammy awards both for his comedy albums and his work on the banjo. In addition to a play, “Picasso at the Lapin Agile,” he has written a bestselling collection of comic pieces, “Pure Drivel;” a bestselling novella, “Shopgirl,” which was adapted into a movie; and a children’s book, “Late for School.” Martin’s pieces appear frequently in The New Yorker and the New York Times. His album, “The Crow: New Songs for the Five-String Banjo,” won a Grammy for Best Bluegrass Album in 2010.

Notice that he omitted personal information. He wants us to view him as an intellectual and fancy artiste.

The result is that Steve Martin’s bio is rather stuffy and dull. That’s fine, though, because it suits his goals. He’s not going for laughs here.

But let’s say I needed a short summary about Steve Martin for some sort of piece I’m writing. Let’s also say that it has to be 100 words or less. Right now, his bio is already 134 words and only covers career highlights. How am I going to create a fuller picture of Steve Martin without going over my 100-word count?

To create the revised bio, I pulled in stuff about his personal life, cut out some work details and sequenced the information differently:

Hollywood funny man Steve Martin, 69, is best known for box office hits like “Father of the Bride,” “Parenthood” and “Roxanne.” He is also an award-winning writer and musician with an Emmy for television writing and Grammy awards for both his comedy albums and an album about the banjo. His books include “Shopgirl,” which was adapted into a movie. His articles have appeared in The New Yorker and the New York Times. The Texas native grew up in in California, where he attended UCLA but never graduated. He and his wife, Anne Stringfield, are parents of a two-year-old child.

I also wanted my Steve Martin bio to be more reader-friendly. For that, I needed what’s called a conversational tone — a tone that sounds like I’m in a conversation with my readers and not talking AT them. Short sentences feel conversational. But the real test of conversationality? For that, I had to read the rewritten bio out loud several times. Whenever I stumbled over a sentence, I knew it needed tweaking. I kept tweaking until I felt like I was talking his bio rather than reading it.

You need bios of different lengths. Having different bios is like having different outfits to wear for different occasions. Thanks to advice from Joan Stewart, an online publicity coach who specializes in working with authors and writers, I’ve just re-done the about me section on this blog.

You’ll find four versions of my bio, all on one page. They range from a two-liner that is 27 words long to a short bio (59 words), medium bio (76 words) and long bio (286 words). The reason? When the media calls asking for an interview or someone wants me to give a talk somewhere, the first thing people ask for is a bio.

If it’s a radio show and there’s only two seconds to describe who I am, they’ll use the two-liner. If there’s more room, they will take one of the longer bios.

Enjoy being yourself. On Twitter, bestselling author Veronica Roth of Divergent fame describes herself this way:

I wrote some books with titles that end in -gent. Okay, technically, one ends in -giant, but in my American Midwesterner accent it sounds the same.

Veronica Roth made a tradeoff. She opted for being cute rather than supplying conventional facts. You decide if her approach works for you.

The point is, when you’re deciding on how to write a bio, keep in mind the purpose, the audience and your mission. Choose your tone and prioritize your facts accordingly. You have options:

Want more help? I can coach you, for free.

Note added Feb. 1, 2017: I hear you. And I feel your pain. This is why I’m creating a free book with step-by-step instructions on how to write a bio. You can refer to it over and over. You will need it. Successful people need multiple bios, often at the same time. To get this free book when it’s ready, subscribe to my blog and warm up to your writing and storytelling process. You might not love every blog post, but I’ll deliver enough to keep you thinking about who you are and how to tell your story. xo