I haven’t posted for a while because I’ve been settling into a new relationship. This is especially tricky for bloggers. After all, we’re wired to share — and overshare. Taking a break seemed the right thing to do. But it’s been half a year of togetherness and I’m ready to chat about my over-50 romance.

For the whole truth, here’s one more fact. I’ve also waited to share because blogging about my past relationships didn’t work out too well.

Given such an unfortunate history, I didn’t want to go down that path again. This time, I wanted to be sure of my feelings before blathering into the blogosphere.

Actually, in looking back, blogging about romance was never the problem. The core issue was that I was always in relationships that were shaky from the very beginning. Like my marriage, they went on too long because I didn’t trust my instincts. How bad can things get? Well, last year, during yet another dating dry spell, I re-read those old posts. Ugh, embarrassing.

It was as if I wrote about being happy to convince myself. To quote the famous bard William Shakespeare, “Lady, thou dost protest too much.” With the benefit of hindsight, I could see that every post screamed of denial. Quicker than you could say “creepy,” I deleted every post about specific relationships, which felt like a ritualistic cleansing. A fresh start.

Then, a few months ago, I met a great guy online. Chemistry lit up our initial email. We went through a couple long phone conversations. At last, the first date, which led to four dates in the first week. By Week #2, we knew we wanted to be together.

I’ve never experienced anything like this in my entire life. It felt so crazy that I grilled my shrink. He reassured me that our behavior was within the realm of “the norm” for romance. As for what this says about my earlier relationships, let’s not go there today, not when we can celebrate that it’s never too late to meet someone special, even if we’re about to turn 58.  :)

At the moment, he and his old dog are in the process of moving in with me, my daughter and our three cats. (Note: My daughter approves of both the man and his faithful hound.)

Over recent weeks, we’ve been in endless rounds of unpacking boxes and lugging furniture. There was the tag sale, the donations to a nearby church attic sale, giveaways to friends. We’re almost done with redecorating. Everything’s been rearranged, from pots and pans to closet shelves.

Now my significant other takes on the new role of blogger fodder. Since he likes his privacy, I doubt he’ll make more than the occasional cameo appearance. But my blogger DNA requires me to officially share the news that he’s in my life, that he’s taking care of me and telling me jokes that make me belly laugh. And, that there’s a new old dog in the house; he’ll never replace my beloved, departed Rosebud but he still makes me smile.

As for what’s next… 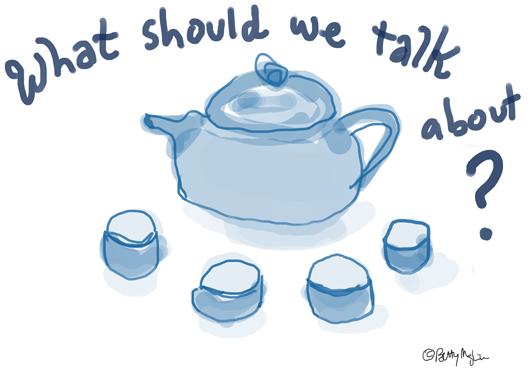 Let’s get back to firing away on multiple burners! This is a great time for you to subscribe to my blog because I’ve got tons of other stuff going on. Summer’s about to take off for me. How about you? xo

My April 10, 2017 update: Well, we had a decent run. And, no regrets. But after three years, the breakup was very, very rough. Where’s what I learned: “After the breakup: being my own woman.”