Oh, those crazy kids! Twitter is taking off with my college students in surprising ways. They feel it’s fly to tweet. They have no twouble being coherent in 140-characters or less.

I truly believe tweeting is a twerrific 21st century skill, and not just for journalists. There’s something for everyone here. One summer, my daughter’s plane was late and I had trouble getting info from the airline’s customer service phone number and website. In frustration, I went straight onto Twitter and tweeted the company — for an instant response.

Apparently, my students are vibing with that instant quality too. Of course, it’s not the only way they talk to me. We have face-to-face time in the classroom. I encourage students to text me with quick homework questions. For more involved issues about assignments, they send proper emails. Many of them like to bond by friending me on Facebook.

And then, there’s Twitter. This is where they share how they feel in the moment. On that front, no one has been able to top Bobby.

On the morning he was too sick to show up for class, he let the whole world know with a tweet that mentioned me and one of his classmates:

My conscientious students worry a lot about showing up late for class. Here’s a tweet that reached me in the middle of a recent night:

On the topic of tardiness, keeping track of attendance goes both ways. I’m usually the early bird, the first to show up for class. So when they don’t see me, they get nervous. This is what happened one night, five minutes before the start of a 6 p.m. class: 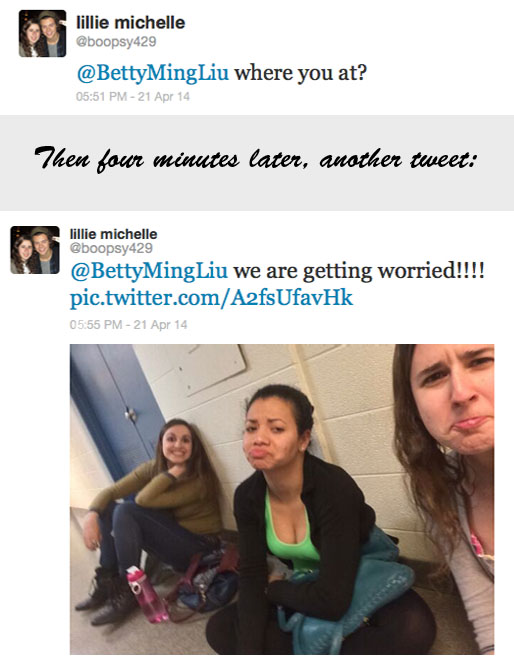 By the way, don’t you love their skill at sending selfies?

They just adore their selfies — along with hanging out together after class: 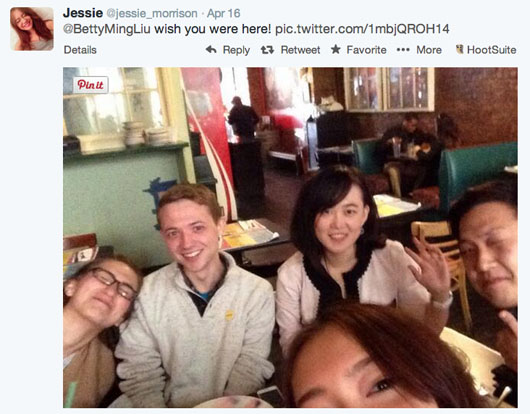 But seriously, Twitter is definitely worth exploring. If you’re interested at all, these last few paragraphs will give you some basic facts:

— In my journalism courses, we use Twitter to network with potential contacts, spot trends and share useful information. For more details on the basics, check out my blog post: How to start building your brand on Twitter.

— Its power as a political networking tool is spelled out in a recent Pew Research study.  In terms of being a racially diverse community, Twitter ranks #2, just behind Instagram, according to more Pew research.

— The potential for San Francisco-based Twitter is still taking shape. On Nov. 7, 2013, the company went public and started trading its shares on the New York Stock Exchange. But Wall Street soon discovered what the rest of us already know: Twitter is an acquired taste and not that easy to use. (Read more on this issue in a New York Times story, here.)

— Yesterday, the release of first quarter 2014 earnings results failed to impress the money crowd and Twitter’s stock is tanking to the $30-range per share. Some more numbers: As of March 31, Twitter had 255 million monthly users around the world, up only 5 percent from the end of 2013. Overall revenue was up 119 percent (!) to $250 million. But with continued losses of $132 million, Twitter’s barely breaking even. (Here’s today’s Times story about company’s financial outlook.)

So that’s the Twitter picture, large and small. From where I sit, the Spring semester is ending in a few weeks. Pretty soon, my students will be leaving the nest. But we’ll still be able to stay in touch with Twitter. <3