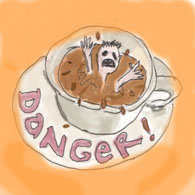 A new book about caffeine has me feeling wary about this psychoactive drug found in coffee and soda. The facts are so disturbing that I’m wondering if it makes sense to become caffeine-free.

The author, Murray Carpenter, said he learned a lot in writing “Caffeinated: How Our Daily Habit Helps, Hurts and Hooks Us,” which was published in March 2014.

Murray has very interesting things to say about the coffee and carbonated soft drinks that make up a monster-sized, $100 billion industry.

Here are 9 facts to drink in from Carpenter’s book:

— Coffee guzzling hit its peak in 1950 just as soda, which has less caffeine, became more popular.

— Most caffeine is manufactured in China. Carpenter made it as far as standing outside of the world’s biggest factory in a “run-down industrial park” that looked “sketchy,” he said during a radio interview on NPR’s “Morning Edition.”

— You can order the same coffee from the same place and end up with a different shot of caffeine each time.

— One tablespoon of caffeine, which weighs about 10 grams, can kill you.

— Eight of the top 10 selling soft drinks are caffeinated, including the top five: Coke, Diet Coke, Pepsi, Mountain Dew and Dr. Pepper. Even an orange soda like Sunkist is caffeinated.

— There’s some research to prove coffee’s benefits. Three to four cups a day, which is considered moderate usage, is “probably” healthy, according to Carpenter. (Although, this still sounds like a lot to me!)

— Caffeine is famous for disrupting sleep.

— Caffeine is also notorious for making us anxious.

All of this information comes from Carpenter’s NPR interview. You can hear the entire 7-minute, 19-second segment here. Or, read a summary of the interview here.

You can also read sections of the book on Amazon.com. The writing’s good. Easy to read. If you’d like to visit the book by going through my Amazon affiliate link, click here. In skimming around, I was intrigued by the dosage information…

The typical soft drink has a sixty-fourth teaspoon of caffeine, enough for a pick-me-up. The typical 12-ounce cup of coffee usually delivers a sixteenth of a teaspoon of the white stuff. If you ingest a quarter of a teaspoon you can expect a pounding heartbeat, sweating and anxious feelings. Then, of course, there’s the killer tablespoon.

While caffeine can sharpen our brains and help athletes run stronger and faster, I am moved by Carpenter’s call for us to pay attention. I like this quote from the NPR interview:

It’s fraught, isn’t it? I mean, on one hand, caffeine makes you feel wonderful and most of us use it every single day. On the other, we have unease about being dependent on a psychoactive chemical. And so I think it’s much easier for us to think, “Oh, I like my coffee” or, “I like my Diet Coke” — rather than, “I need my dose of caffeine right now.”

Hmmm, what do you think? Should we rethink caffeine? Does this make sense to you?