Was that really me the other night? Me, lugging a big drawing pad to a packed lecture hall at Columbia University’s Graduate School of Journalism!

I was there for an advanced, sold-out social media training workshop — but not as the typical attendee. With my graphite pencils and pastels arranged on a side table, my mission was to make the first-ever live sketch of this popular event.

You’ve probably heard about artists-for-hire who paint wedding scenes in real time during the actual celebrations. The notion of covering a meeting, though, is quite new and totally challenging…what do you do for visuals when it’s just a bunch of people standing in front of an audience? Ho hum.

Well, there are solutions. As each speaker approached the podium, cartoon-y thumbnails of their faces found their way onto my 18″ x 24″ sheet of poster paper. Their key talking points became notes that filled doodles of little scrolls. Since this workshop was about social media, all the Twitter references were a great excuse to paint in birds that I covered in bright blue glitter.

Working in real time. One page of paper. No second takes. No safety net.

That’s what I call being the journalARTist.

Ooops, make that journalARTist™. Yup, I’m trademarking this baby. And this is indeed a birthing. At last, my dual identities as both journalist and artist have stopped competing for my attention. Now they’re uniting in a single vision that I believe will thrive in our increasingly visually-driven, communications-focused 21st century world. No more schizophrenia. Yay!

The journalARTist was launched on May 16, 2013 at Sree Sreenivasan’s “Social Media One-Night Stand,” a four-hour continuing education workshop offered by my alma mater. If you don’t know Sree, you must meet him. He’s an internationally-known social media expert from the J-school’s faculty who recently made a dazzling leap to become the university’s first chief digital officer.

Here’s a shot of him rallying the troops, along with a look at my drawing pad at the start of the night and then again, near the end:

The crowd was mostly journalists, bloggers and other media professionals. Top social media names shared insider tricks to brand-building with Twitter, Pinterest and more. Btw, the workshop, which is offered at least once a year, provides tons of giveaways, like upgrades on LinkedIn and free trials to interesting websites; great value for $145. For more info, click here.)

So there I was, sketching, sprinkling glitter, painting, taking notes, meeting folks….I ended the evening wiped but happy. What an education in overcoming fear, embracing blank spaces and enjoying other people’s energy. I also learned that pastels rock because they work dry in vibrant colors and smudge beautifully.

Collage, though, was a bust. First of all, the gluing process is wet and messy. And the words that I cut out from various newspapers proved so distracting that I had to peel them off. Many thanks to fab commercial photographer and new friend Greg Lord, for taking this photo of the completed live illustration: 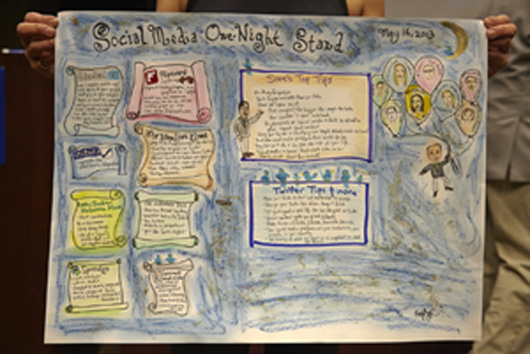 For a larger, high-resolution, readable version of his picture, click here to visit my Flickr.com account. Or maybe these details are enough:

If I could have bottled my experience, it would be a great tonic for building an entrepreneurial approach to daily living. Short of that, maybe you’ll find the following summary useful. This is what I’ve learned so far as the journalARTist….

Five ways to build your brand

Dare to take a chance. Sree and I pulled together this live-sketching experiment just days before the event, via a few emails and one brief phone call. He’d never had an artist at his workshops and I’ve never drawn on-the-spot. So even though we didn’t really know what we were doing, we decided to go for it! Why not!

Stop judging yourself. I had no idea of how to approach this gig until Sree said the magic words. “It doesn’t matter if this is a flop,” he assured me. That trust and generosity on his part freed me to trust myself. No negative consequences. No negativity.

Intuition and spontaneity rules! About 72 hours before the workshop, a word popped out of nowhere into my head: “journalartist.” A few minutes later, it flashed again, but this time as “journalARTist.” Right away, I called an acquaintance who is an intellectual property lawyer. By the next day, he had filed a trademark application for my special word and 24 hours later, I was using “journalARTist” at Sree’s workshop.

Keep things simple. Looking back, this was the most important lesson. My goal wasn’t to replicate the Sistine Chapel. No one was asking me to prove that I was the greatest artist or communicator. This was just about doing some brainstorming with Sree. We were looking for new ways to make his workshop even more memorable.

Be flexible. Good thing the Staples website has an instant printing service that allowed me to upload the business card that I quickly designed on my MacBook’s iPages. I was able to pick up the cards about four hours later at a store near my house. The only downer was that instant business cards can’t be two-sided. Oh well! That just meant I would hand out two cards to everyone, haha!

That night was the start of some incredible vibes. Sree encouraged his workshoppers to tweet about me in a burst of connections that has continued even after the event:

Going forward, I’m feeling more defined, more complete, more fully sketched out.  Thanks to you all for the love! xo