My daughter, now 17, is modeling right this minute in Seventeen magazine for the third time. She’s  17, in Seventeen…sweet!!!

The experience taught both of us even more about how she can get out there to catch her own dreams. After all, never too young to learn persistance, patience, disappointment, failure — and the glory of  perseverance. More on that later.

First, the photo spread, which is in a special, long-running prom issue published annually by the monthly magazine.  It went on newsstands in early January and is available through April. The first glimpse of Gabi is in the table of contents: 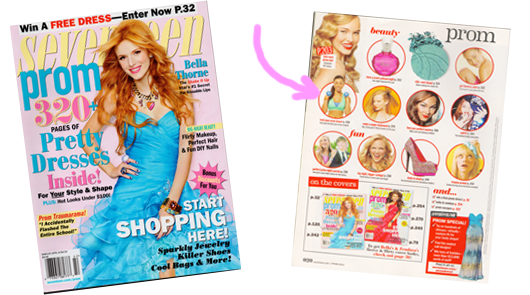 Then, you’ll find her in the “rock your prom dress!” feature on pages 228-229, demonstrating a workout for legs! arms! abs! butt! 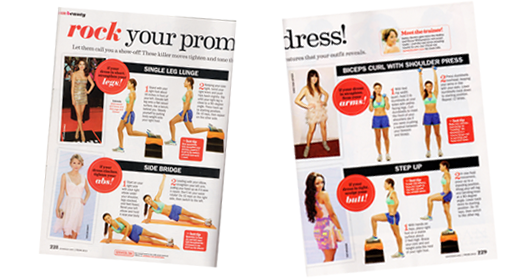 You know the best part of seeing Gabi in Seventeen? I did NOTHING. No helicopter mom behavior on my part, which I’m proud to say.

Whenever an editorial intern or editor has called or emailed Gabs asking her to send in new photos of her hands or full body shot for possible upcoming shoots, she’d snap new pictures on her iPhone and send them in. When she didn’t hear back, she would email and call — only to hear “thanks, but  not this time.” Yes, disappointment over and over again.

And that was GREAT. The ability to pick ourselves up after moments of disappointment is a critical life skill, wouldn’t you agree? Gabi has learned the value of keeping in touch by email, to say hi and ask if there was anything they needed. She now understands how important it is to stay on the radar of decision makers and others who are important to us.

Another lesson: Getting what we want often comes in a progression of steps. The modeling dream began in 2011 after Gabi responded to a call for readers to appear in Seventeen’s pages as unpaid models. She found out about it via Seventeen’s Facebook page. So girls, if you want to model in Seventeen, be sure to like the magazine on Facebook (by liking, you will be sent invites to special events, like modeling auditions). It’s also essential to read the monthly issues of the magazine in print and online.

The first photo shoot in Manhattan was so exciting and glamorous. You can read about it and see the behind-the-scenes photos I took by clicking on an earlier post here. We were there for most of a day. In the end, Gabi was featured just once, as another pretty little headshot among six girls that were also modeling hair dos on a single page.

Afterwards, the magazine would occasionally call and email, which is when she learned the art of staying in touch. For the second shoot, I couldn’t go with her because I had to work and we were both really sad about that. So she got on the train by herself to the city and handled the shoot alone — which turned out to be a confidence builder for us both.

This time, the outcome was even better. Instead of sharing a page, she had a page all her own. I blogged about it and added photos on another earlier post, here.

And now she’s in multiple pages, with multiple images for 2013. By this latest third shoot, she was an old pro at going without Mommy…

As I sit here typing all this and uploading photos for you, it feels like a miracle to be in this particular emotional space. That’s right, world, I did NOT micro-manage my child the way my strict parents bore down on me. Telling her what to do has always the easy part because control freakishness is in my DNA (although she hardly listens to me anymore). The tougher practice is to Let Her Have Her Own Space To Do Things Her Way.

So here’s to letting go of clutching onto people, outmoded values and memories that no longer serve us. Get that stuff out of the way and suddenly, there’s room for wonderful new experiences, especially with those we love the most.  xo