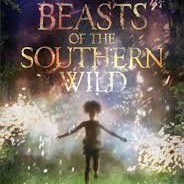 I saw “Beasts of the Southern Wild” with my daughter and it had us both sobbing. We will probably weep again since I’ve ordered a copy of it on Amazon.com

— and not just because this Oscar-nominated flick was made by a kid from the neighborhood.

Since I really want you to see “Beasts,” there will not be any plot details revealed here. Suffice it to say that this is a raw, poetic tale set amid the poverty of the Louisiana Bayou. It is about the fierce love between a five-year-old girl with an untamed afro, and her ailing daddy.

What follows below are remarks from a talk by the filmmaker’s parents that we attended immediately following our viewing of the movie. Even though the two main characters are black, this is not a “black film,” which is such an obnoxious phrase anyway. I agreed with the parents’ description, that “Beasts” addresses the universal challenge of how to stand by the people and places that you love, even if they may not always be safe.

“Beasts” is up for four Oscars: Best picture, director, adapted screenplay and actress. When it was made, director Benh Zeitlin was 26 and the star, Quvenzhane Wallis, was five years old. To get into the audition which was for six year olds and up, she lied about her age as she went on to beat out 4,000 other contenders. Now she’s the youngest actress to ever compete for one of those special gold statues.

Over the weekend, my daughter Gabi and I joined a couple hundred of our neighbors for a free screening of “Beasts” sponsored by the Hastings Library at the Andrus Senior Residence in our village of Hastings-on-Hudson, N.Y. After the packed viewing, we stayed for cookies, a slice of the huge Stew Leonard’s sheet cake (yum) — and for a talk by the director’s parents, who are locals too.

“Our official title is producers of the director,” said Steve Zeitlin as we cracked up.

We also got a kick out of Amanda Dargan, who kept taking the microphone from her husband to share delicious, behind-the-scenes details. It was fascinating to hear that their first-born was editing up right up until 24 hours before the project was screened at Sundance, where it received a standing ovation. Proud as they were, they never imagined their boy’s project would win Hollywood accolades.

With all that, what more could any parent want for a kid? “Health insurance,” she said as we laughed again.

5 reasons to find inspiration in “Beasts”

The apple doesn’t fall far from the tree. I was blown away to learn the parents founded a nonprofit  that I have long admired: City Lore. As folklorists, their mission is to celebrate New York City — and America’s — cultural heritage via educational programs, exhibitions, poetry workshops, music, movies and more. As parents, they read their kids lots of folk tales and stories. During the talk, it became clear that Mom and Dad’s unconventional passions deeply  influenced the director’s vision.

Community building is the way to go. Benh graduated from Wesleyan University, where he majored in film studies. The production team is filled with school buddies, including best friend Crockett Doob, also from Hastings, who edited (and is the son of a filmmaker and actress; another example of an apple that didn’t fall far from the tree). Benh and his younger sister Eliza Zeitlin are close too. When she was born, Mom and Dad gave the new big brother a puppet show set. He started out entertaining the baby. Then they staged things together. Later, she was the visual artist who helped out with the animation for his senior thesis, a short film called  “Egg.” For “Beast,” she helmed the art department.

Meaningful vacations are more important than lavish trips. I wasn’t surprised to hear that folklorists raise kids on a tight budget. “We couldn’t take them on fancy European vacations so took them to what we knew,” said Mom. So they took them to the heart of American music to places like the Mississippi Delta and New Orleans, where the parents conducted oral histories, field work and searched  for elderly blues singers in nursing homes. To make the film, he lived in New Orleans for eight months and interviewed locals about their lives. Clearly, the kids learned to appreciate real people and cultural diversity.

Working with real people is so, well, real. Remarkable, powerful fact: Every person in the film was a non-actor. Dwight Henry, who plays Wink, the difficult daddy, actually ran a bakery across the street from the production’s New Orleans studio. In order to win the part, he had to establish rapport with his little co-star. “He was famous for making these donuts,” Mom explained to us. When he met his tiny leading lady, he showed up carrying a batch of sweets that had her grinning.

Kids must have their space.  The parents said that their son took a lot of writing and poetry classes at Wesleyan. I think they got their money’s worth out of that college experience. “Beasts” is an intense, dreamy movie with a non-linear approach to storytelling. So don’t expect a tidy, A-to-B Hollywood logic as the flick progresses from scene-to-scene. Dad said the movie is also an emotionally “darker” vision on things “than our folkoric celebratory take on life.” A natural progression, if you ask me.

“Beasts of the Southern Wild” offers me a marvelous invitation to reflect during a critical emotional period. The past week brought the 37th anniversary of my daddy’s death. In early February, it will be three years since the passing of my mom at age 92. Trust me, when your parents die, they are still with you. You’re just carrying them around in different ways. What that looks like keeps changing; yes, even at age 56, I’m still figuring that out now.

Which means my conversation with them these days is less angry and resentful than ever before. Having found so much of myself in recent years, “Beasts” positions me to feel much more deeply as I puzzle over what I want to give to my 17-year-old daughter, what I got from my parents — and how I want to proceed through 2013…

The Zeitlin parents said that their son’s single toughest challenge in making “Beasts” was portraying the daughter-father relationship without making it come across as abusive. As a survivor of tough love myself, I can say that the movie succeeded! When the lights went on, I went home carrying the message that love — any form of true love — is tough enough to weather storms.

So peace and love to you all as we continue with the challenge of celebrating our daily lives. Happiness  and beauty is there, if we are willing to take it in.  xo