My daughter got into Seventeen magazine for a second time! In addition to the great photo shoot, Gabi has learned some essential life skills. Yay — at age 16, she’s becoming more entrepreneurial.

As you might know, Seventeen uses readers as models. Ooooh, dangling a wholesome peek into every girlie-girl’s favorite fantasy is such a brilliant way to build brand loyalty.

The strategy certainly hooked Gabi. She pores over Seventeen’s website and Facebook page. She always grabs the latest print edition from the mailbox the second it arrives. Her dedication increased after she was featured in the April 2011 issue, which I blogged about here: “How to be in Seventeen magazine, like my daughter.”

Now she has a second thrill. Check out page page 207 of the $4.99 special prom issue, which is on sale through April: 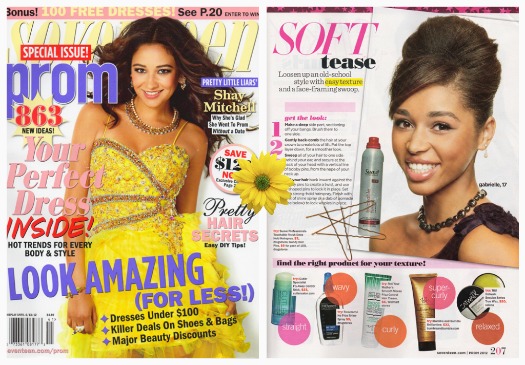 Putting readers in the magazine like this is a win-win for everyone.

Up until these modeling adventures, life was all about Mommy-doing-everything. But after the first shoot, Gabi personally wrote thank-you emails to the Seventeen staffers she worked with. Later, she initiated follow-up emails — plus the occasional phone call — to say hi and stay in touch.

The second shoot also showed her that success is achieved in steps — in the 2011 monthly, she was just one little ‘do among half a dozen. This time she has a whole page to herself, with a full face shot, in a special edition that is enjoying a long newsstand run. 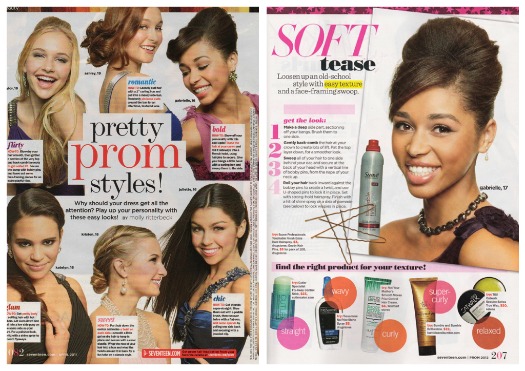 The page on the left is from the April 2011 issue of Seventeen.

Even though Gabi initially hoped to model a lot, school has kept her too busy. Actually, I’m relieved because professional modeling can shred a pretty girl’s self-esteem. But the Seventeen gigs have the opposite impact. In the year between my baby’s two shoots, she’s grown more self-confident and savvy. Even though these are upaid assignments, the memories and lessons are priceless. Thank you, Seventeen!

P.S. — For some insight on the modeling world, here’s a New York Times story about Sports Illustrated swimsuit issue cover girl Kate Upton. She didn’t have the “right” look. But she made a boobs-bouncing YouTube video and used her Twitter to create an audience. These free, online resources are available to everyone. So cleavage or no cleavage, we can all get closer to our dreams by developing that entrepreneurial ability to seize the moment.