I’ll always remember the afternoon when I carried my baby Gabi into his office. She was such a gloriously fat, beautiful little person.

Since she wasn’t walking yet, I lugged her everywhere. Kinda hard on the lower back. But that was nothing compared to the constant demands of feeding and changing diapers. And now we were in the city for the baby’s annual check-up.

The doctor started with the standard how-is-Gabi-doing questions. He asked about me too. I joked that being a full-time mom was much more difficult than working for a big city newspaper.

Then he paused. I don’t know what he saw in my behavior or demeanor. But suddenly, he switched gears and told me a story. It went something like this:

Once upon a time, two full-time moms and their newborns were in his waiting room. The women, who didn’t know each other, were about the same age, about the same level of education, even approximately the same physical build. They were also both blessed with healthy babies.

But one of the new mothers was exhausted. Her hair was blah. She wasn’t wearing lipstick. Her clothes gave the impression that she’d just thrown them on. Meanwhile, the other woman was full of happy conversation. Her outfit looked good. The pediatrician couldn’t get over the moms’ similarities — and striking differences.

Hmmm. During their respective appointments, the doctor listened carefully. By the time everyone left his office, he had an idea of what was going on.

The stressed-out mom: Every time the baby made a peep, she jumped into 911 mode. It didn’t matter if she was in the middle of something. All was dropped to serve her child.

The happier mom: When the baby needed her, she was there too. But as much as possible, her priority was to complete her task-at-hand. This meant that her hungry infant didn’t eat until Mommy took a few extra minutes to finish that email and hit the “send” key. If this mother was on the phone, she’d finish the call.

What a revelation. Up until then, my life was a series of red-alert relationships. After all, my Chinese immigrant parents had raised me to be good Chinese girl who would make a good wife and mother. We all know what that means….everyone else comes first! Let’s hear it for personal sacrifice on every extreme and unnecessary level!

It’s been 15 years since that doctor’s office visit. Right afterwards, I could barely identify the crazymaking qualities of my life. The re-education began with Gabi. If I smelled a dirty diaper, I’d keep reading the newspaper instead of jumping up to change it. Even though I felt guilty, I told myself that a few extra minutes wouldn’t make a difference. Eventually, I eased away from some difficult friendships and learned to count to 10 before answering my mother’s questions.

These days, I’ve gotten pretty good at saying “no” to annoying people. I’ve even learned to deal with the most annoying person of all: Me. I mean, really — if I’ve cleared my schedule for a morning of writing, does the laundry need to be done that very second?????! 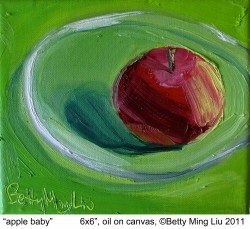 My daughter likes this painting so i named it "apple baby" because she's the apple of my eye.

Can I consciously stop myself from loading clothes in the washer?!

Can I give myself the quality time that I need?!

Can I believe in my own creativity?????!

Getting to “yes” is a huge effort. But with practice, this exercise in self-respect keeps getting a little easier.

Lesson learned. Over and over.