Tell me the truth — do I really have to spend the rest of my life wrestling with ethnic identity issues?

What the hell does any of this mean anyway?

More than half a century of personal soul searching has not brought much resolution:

Thankfully, this next half a century of babbling on the shrink’s couch should be a little more interesting. After all, people of Asian heritage have reached a critical mass in the United States. Please, please, let us truly be at the tipping point, where re-invention is possible and life becomes new.

As for what’s teetering on the brink of celebration…. 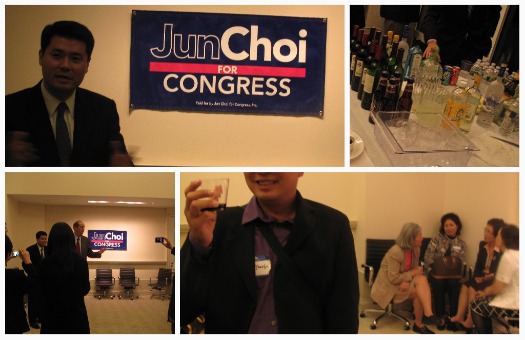 The other night, my friend Jeannie Park talked me into going Jun Choi's fundraiser. The one-term mayor of Edison, N.J. has his eye on a House seat. If would make him the northeast's first Asian American congressman. The event was held at a super-swanky Manhattan address on Central Park West and had three fundraising essentials: Sen. Ben Bradley, who still has star power from his days playing for the New York Knicks; top quality booze; a team of doting, devoted Korean moms.

If you’re interested in knowing more about Jun Choi, check out his campaign here. I liked his message. He talked about what it was like to take on Edison’s police union, downsized his local government and helped reduce taxes. He ran for re-election but lost by a few hundred votes.

And I’m sorry I cut off the head of the guy in the photo collage above. Here he is:

Jeff Yang has been hired by the Wall Street Journal to write its first-ever column about Asian/American Pop/Culture. This son of Taiwanese immigrants lives in Park Slope, Brooklyn with his wife and their two sons. When he graduated from Harvard, the psych major went on to start an Asian American magazine. He has written books, many articles & passionately explores all things Asian American.

Becoming a Journal columnist means Jeff gets a coveted, hand-drawn hedcut. These pictures are painstakingly drawn dot-by-dot and have become the paper’s artistic signature. Jeff  named his column “Tao Jones.” It will appear every Friday on the Journal’s Speakeasy blog, which covers entertainment and the arts.

I am so dense that he had to explain the column’s title to me. It’s a punny play on “Dow Jones,” the Journal’s parent company. Tao — which is pronounced “dow” — is the marvelous Chinese philosophy about finding “the way.” The column launches tomorrow. Let’s help our boy reach the tipping point by becoming his readers!

And now, a little about my own potential tipping point…

This painting is in the hands of my first collector, Chuck Zoeller. He's head of special projects at The Associated Press and a former photo editor. He hung "cali roll" in his kitchen. He says that it "jumps off the wall and makes me happy every time I walk in the kitchen; even when the Yankees are losing."

Last summer, I made a few paintings of Asian food. Looking at sushi and Chinese dumpling buns as art objects gave me a new way to access my culture issues. Painting forces me to stop thinking and just feel. I can honestly say that with the brush in hand, being Chinese and American wasn’t an emotional debate of “bad” or “good.” It became a matter of light and shadow, color and warmth.

Now, if only I could stay in that head all the time.