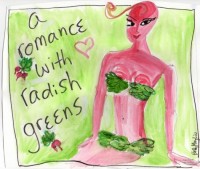 I hope you can tell that she’s a radish head. :)

This post is about a great recipe. It’s also about the possibility of re-invention. The story begins with Sophie Morgiewicz, 71, the widowed matriarch of Morgiewiecz Farms in upstate Goshen, N.Y.

Sophie and her three sons grow tons of vegetables on their 170-acre property, which has been in the family for five generations. Every Saturday, they drive down from their home in the Hudson Valley’s legendary Black Dirt region to my local farmers market in Hastings-on-Hudson, N.Y. I’m always there on Saturday’s too, browsing their splendid array of leafy greens, squashes and root vegetables.

But then, Irene put their farm underwater and destroyed much of their harvest.

After the storm, the family showed up with potatoes, beets and only a few other hardy items. A heartbreaking sight. Now, a month later, things seem better. Mesclun is back. The cucumbers and kombucha squash are terrific. And there are plenty of radishes, a fast-growing crop that’s sold by the bunch.

Sophie says that most radish customers ask her to twist off the green tops, which she throws away. A few weeks ago, I asked her to save them for me. Guess what — she’d NEVER eaten them, not even once. But this past Saturday, I cooked some for her. She took a bite. Then another.

Here is a shot of Sophie, just after tasting radish greens from the plastic container in her hands. Plastic white shopping bags are looped over her arm. She’s ready to move merchandise but did a taste test to humor me.  :) 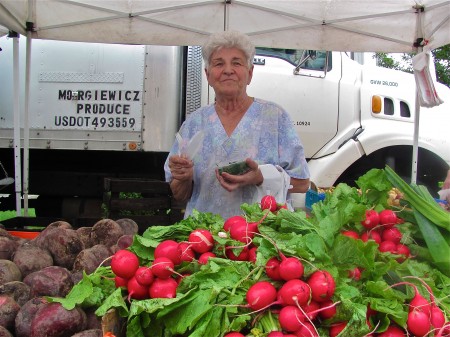 Plenty of people would agree. Radish greens are lush. Google “recipes for radish greens” to read the raves for the robust color, texture and flavor of these under-appreciated veggies. You’ll also read many laments over the difficulty in getting your hands on enough of this flavor-packed, nutrient-dense treasure.

Those who manage to amass enough leaves have a number of choices in the kitchen. Western chefs veer toward the basic saute-in-butter or a puree for cream-based soups. And while Asian cultures cook and pickle all types of radish, it seems that only the Chinese are really known for loving the leaves.

Beyond taste, there’s an outstanding nutritional profile. These calcium-rich greens with anti-cancer properties deliver six times more Vitamin C than the actual radishes, according to EveryNutrient.com.

Chinese herbal medicine values radish greens as an aid for circulation and digestion. They are effective at breaking up mucus, phlegm and edema, says expert Jeffrey Yuen, who is a good friend. He adds that someone my size — 5’4″ and 125 pounds — could benefit from half a cup of cooked radish greens a day while the crop is in season.

Now for the recipe….

Prep radish greens just the way you would spinach (even though the taste and texture are different). A few rinses are necessary. Chop the leaves. Or, not.

Cooking can be as simple as a saute with some olive oil or butter in a hot pan, over a medium flame. Wilting them is good enough. Or for a smoother chew, cook for 10 minutes, either covered or uncovered.

To take down the pungency, a splash of Bragg Liquid Aminos will do the job. 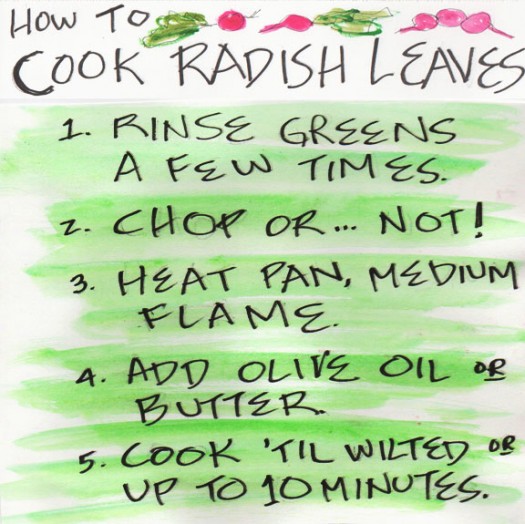 It doesn’t get much easier than this!

The sturdy leaves are thicker and more chewy than spinach. They are also more spicy and bitter. Based on my initial experiments, they seem to be a delightful yet assertive team player with other ingredients.

Check out the trio of photos below. I start out by chopping, then stir-frying with sliced radishes, mushrooms, wood ears (a tree fungus) and ground pork. This dish is seasoned with olive oil and Bragg Liquid Aminos — a great, gluten-free, alcohol-free, sugar-free substitute for soy sauce that also works well in non-Asian dishes. It’s served here with quinoa. Yum. Btw, cooked radishes are very nice too.

So what should Sophie and her family do with their wonderful trash? Hmmm. Let’s say a one-pound bunch of radishes sells for $1.50. Two-thirds of that sale is radish. The other third is leaves.

Sophie wanted to give me the greens for free. I insisted on paying $2 per pound. Honestly? If the leaves were unbruised (cut off at the stem instead of twisted off), I’d be happy to pay $2.50 per pound.

I’m pretty sure that Sophie and her family will read this post. Maybe you can offer some consumer feedback. It would be interesting to hear what you have to say from any perspective, whether you plan to eat/cook/buy radish greens or not. What do you think when you hear the phrase “radish tops” or “radish leaves?”

As for me, this is what I’m ready for: 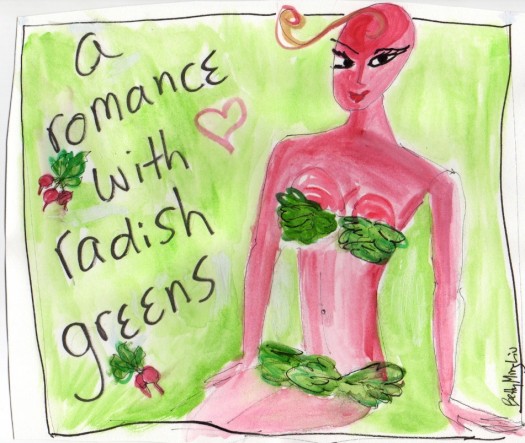 This is my doodle of a radish. She’s hot, haha!

P.S. – Update at 11 a.m.: I’m getting a few personal emails asking about dietary/energetic use of radish greens. So let me just post it here. My Chinese medicine go-to guy, Jeffrey, says that radish greens are classified as sweet, spicy and warming. They can get things moving in your system and help with cleaning out liver/blood issues. That’s why they’re good for stimulating circulation. And if you tend to feel cold, eating them in season will be pleasantly warming.

In terms of restrictions, he says too much will lead to constipation! For menstruating women, too much can lead to an early period. “Too much” can be defined as eating more than two-thirds of a cup of cooked greens per day for many days. For most people, it will be impossible to even find enough greens to cook half a cup. “Moderation” is the buzzword.   :)

If you’d like to check out more of my food stuff, just go HERE.

Update, June 14, 2014: Thank you all for making this one of my most popular blog posts! Just thought you’d like to know that shortly after this post ran, Sophie’s customers started keeping the tops. Btw, Sophie’s stand just opened again today for the start of the 2014 season. Of course, I bought a beautiful bunch of radish greens. Welcome back, Sophie!