I absolutely must share the experience of my day at a Chinese American-sponsored event that offered great ideas and inspiration for everyone. Since I can be grouchy about issues related to my ethnic heritage, it feels wonderful to be totally positive (for a change).

My good time took place at the national OCA convention. This Washington, D.C. -based group was originally founded in 1973 by Chinese Americans and states its mission as “embracing the hopes and aspirations of Asian Pacific Americans.” This year’s convention (Aug. 4-7) was held at midtown Manhattan’s Grand Hyatt and I had a blast attending it last Thursday.

The adventure consisted of going to two panel discussions and a keynote luncheon. What follows are thumbnail summaries on the various speakers, their organizations and their projects. I’ll bet you’ll find something below that will make you say, “Wow.” Okay. Here we go….

Even now, I remain uplifted by the message of the keynote luncheon speaker, Ed Tom. This Chinese American guy had a cool job as a Saks Fifth Avenue buyer. He quit to become an underpaid New York City math teacher (!). In 2005, he went to the South Bronx to found Bronx Center for Science and Mathematics.

Ed Tom and one of his students.

As the principal of this public school, he and his mostly black and Latino students can brag about a 92 percent on-time graduation rate. The kids have been going on to four-year colleges and winning millions of dollars in scholarships.

Their story was turned into a documentary by Christopher Wong, who is Chinese American too. You can watch video from “Whatever It Takes” on the PBS website.

During our convention luncheon, Ed, 40, was a dynamic speaker in a sharp suit. He said a lot of important stuff, which included two central points:

“Each of us must decide our moral purpose in life.”

And his second point:

His speech practically made me cry. And I totally agree: Life demands a greater context for each of us that goes beyond doing right by our children and families, or even the pursuit of our creative dreams. Why am I here? I’m still trying to answer that and Ed’s talk helped.

In addition to lunch (salmon, risotto, salad and some sort of dessert pudding), I sat through two terrific workshops. Then there were the breaks, which gave me a chance to wander the job fair’s exhibitors in aggressive pursuit of free pens, cups and other irresistible knickknacks.  :-)

Census panel: Who we are 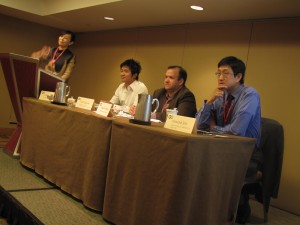 Data from the 2010 Census is creating an intriguing portrait of America. The morning panel on “Trends in the AAPI Community: Population and Economic Power” gave a feel for what’s out there.

A running theme during the panel was the remarkable diversity of the Asian American community — and how important it is to build a collective voice as a political power base.

As for the panelists:

>>> The U.S. Department of Labor has a new study, “The Asian American Labor Force in the Recovery.” Click on this link to also find similar studies that were done on three other groups: : blacks, Hispanics and women. Robert Asaro-Angelo, the department’s regional rep, noted that 7.2 million people — 5 percent of the U.S. labor force — is of Asian descent. Asians have the lowest unemployment rate, tend to be more educated and are more likely to work in the private sector.

>>> The Asian American Federation of New York has an online Census Resource Center that’s run by Census Programs Director Howard Shih. He told us that Asian Americans are growing at an even faster rate than Hispanics. And while many people think Asian = Chinese, he explained that increasingly, “Asian means South Asian” because the Indian population is booming. On the downside: The personal net worth of Asian Americans has dropped by a drastic 32 percent — more than for any other group. Reason: real estate-loving Asians are big on home ownership and unfortunately, property values have tanked. Another fact: In NYC, the overall higher average incomes of Asians masks another reality — there are many poor Asians whose poverty rates are almost twice as high as non-Hispanic whites.

>>> Tuan Nguyen, deputy director for MQVN, talked about his New Orleans-based group. Its mission is to help Vietnamese Americans fishermen deal with the aftermath of both Katrina and the BP oil spill. He had so many stories. There was the old lady who is now growing vegetables in her backyard and selling them at a local farmers market. The fishermen and shrimpers have gotten out of that quiet immigrant head; they’ve learned how to pick up their cell phones and mobilize their ranks at lightening speed. The community is also exploring aquaponics as a new industry. 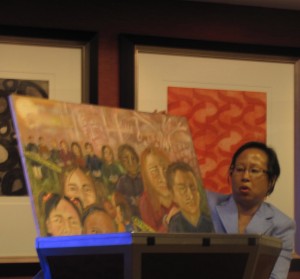 Liz OuYang with a painting by teens.

I also really enjoyed an afternoon panel on “Arts as an Advocacy Tool.” It highlighted projects going on around the country.

The panel was moderated by civil rights attorney Liz OuYang who is president of OCA-New York. She talked about her chapter’s “Hate Crimes Prevention Art Project,”

The annual event is run as an art contest that builds awareness among teens of all races and LGBT (lesbian, gay, bisexual, transgender) youth. As for the four panelists: 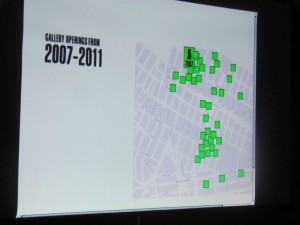 The New Museum is the black spot amid the green. 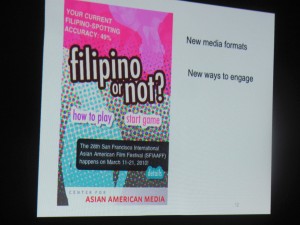 Friends are having fun with this one. 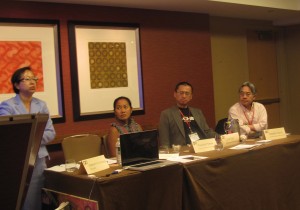 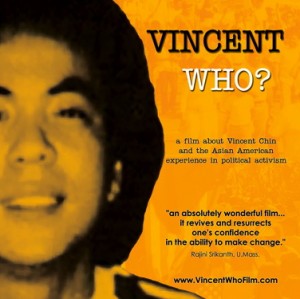 I hope you’ll find useful info in these many, many links to people and places. There’s great information here that needs to be shared.  :)

And I also must give a shout-out now to one of the convention co-chairs, the ever-patient and gracious June Jee, who urged me to attend. Thanks girl, for caring about us all!! xox.