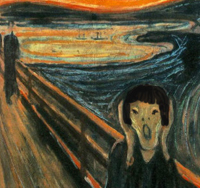 I just turned 55. And I am scared. The feeling reminds me of quarter-life angst except worse. After all, a half-life crisis involves twice as much emotional baggage. But thankfully, there’s also the potential for twice as much wisdom — which I discovered during a birthday morning visit with the shrink.

My regular Monday session began with the same issues that troubled me at 25: I haven’t accomplished enough with my life. How am I ever going to amount to anything? What if I die a nobody? I’m ashamed of my whining when there’s true suffering in the world.

As the therapeutic conversation warmed up, the 25-year-old version of me didn’t look so bad after all. In 1981, that younger Betty was annoying her mother by dating a black man and working as a rookie in New Jersey’s low-paying newspapers. She went on to exciting times that included becoming the first Asian American staffer at every publication that hired her. The marriage pulled both her and her husband out of their respective ghetto childhoods. They threw themselves into a whirlwind routine filled with resort vacations, four-star restaurant dinners and fancy cars.

Even though I was scared then, my life was still ahead of me. There was a career ladder to climb and a marriage to manage. The conventional structure felt safe. I knew what steps to take —

“You mean, you knew what mistakes to make,” Dr. Shrink interrupted. We both laughed. He was right. After 15 years in daily journalism, I got out. After 17 years of marriage, I got out.

Those two moves left a decade-long void. Today, fear comes from the effort of once again reinventing myself. The issues are different now because I am staring at the horizon line of my own mortality. It’s no longer about landing the first job or looking forward to the first marriage. There is no template for this stage where aging baby boomers like me are wrestling with what to do after multiple careers and relationships.

In talking to Dr. Shrink, I realized that the scariest thing about being 55 is that I’m not actually looking for a new me. I just want the original me, the one I could’ve been if I wasn’t scarred by my immigrant parents’ best intentions. Their defensiveness about being not good enough runs so deep. My confidence always fails when I start thinking of myself as being hopelessly outside the American mainstream…

Blathering about this stuff helped. Eventually, Dr. Shrink got me to a new emotional space. I walked out of his office realizing that the fear I feel is just a part of risk-taking. F-e-a-r might be a four-letter word but it’s not necessarily a negative. Taking creative, emotional and financial risks is exciting — and dangerous. Which means that fear and excitement are a yin-yang package deal. Period.

So I think I can accept the new reality, at least until my three-quarter life crisis. I also know that I’m not alone. There are plenty of folks of all ages who are experimenting. They are my people, my community, my race.

They are called “entrepreneurs.”