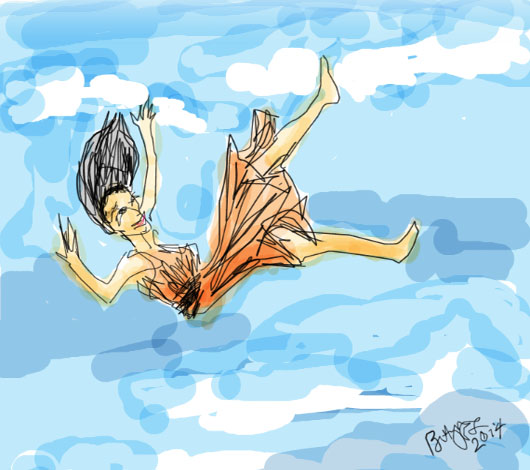 On Tuesday night, I heard Amy Chua speak at the Time-Life Building in midtown Manhattan. Even though her whole Tiger Mom phenom disturbs me, I was curious.

In the end, the opportunity to see this controversial author up close was a revelation…Wow. Amy Chua is actually a confusing, ideological mess.

She constantly contradicted herself. She chattered away without providing real answers. By the time I left the 90-minute Q&A session, I had no idea what she stood for. I can’t trust anything she says. But trying to figure her out is not worth my energy. I don’t even want to keep detesting her. Time to move on emotionally. I’m ready.

The event I attended was more than another stop on her book tour for “Battle Hymn of the Tiger Mother.” As everyone knows by now, her dreadful bestseller about hard-core Chinese parenting tactics has detonated a global debate about raising children and the future of the slacker Western world. She’s done many readings and talks to spread her message — including some with students of Asian heritage.

But the gathering I went to was unique. For the first time ever, Amy was meeting with an audience of Asian American adults. We were her ethnic peers, a select mix of about 150 media professionals and Harvard University alumni. Most of us hail from immigrant families. Many of us are raising kids of our own. As a demographic, some of us have been giving her trouble.

“The Asian American feedback has been interesting — it’s been bi-polar,” she said. 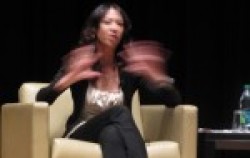 Her fans that night were represented by a sizable contingent that laughed at all of her jokes. She talked non-st0p and really fast.

Then there were the rest of us, who she described as being “among the angriest pool — ‘I hate my parents, I hate my life and how can you be championing this?’ If this pool read the book, some of them would get it.”

For the record, I love my life and even my late parents (especially since they’re deceased). I’ve also read the book. My one-word review is: Eeeew. In a deceptively friendly, breezy tone, Amy recounts her struggle to raise her two teen daughters with the same Chinese tough love values that her immigrant parents inflicted on her. I was appalled to read how she micro-managed her kids and then rationalized away her abusive mistakes with a grin.

I won’t go through all the points from Amy’s one-hour talk, which was followed by a half hour of Q&A. For starters, a lot of the content was familiar from past interviews. Her delivery was high-energy, self-deprecating and somewhat charming.

There were the usual anecdotes (her father hated his parents, her younger daughter Lulu rebelled). She had her stock punch lines (“Parenting is more intense than the Palestinian/Israeli conflict.” “My daughters get the best lines in the book.”). 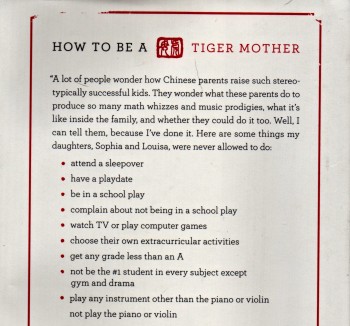 And once again, we got her signature defense of “Battle Hymn.” It’s an anthem that she trots out and repeats, repeats, repeats in interviews: Hey, this is a memoir rather than a how-to parenting guide — don’t you get it?!

I’ve always had problems with this explanation of hers because the word “memoir” appears nowhere on the book jacket. However, the back of the book does clearly state: “HOW TO BE A TIGER MOTHER.”

Thankfully, we got more than the basic book tour talk. Some of what went on was fascinating. In fact, it was quite startling to witness her attempt to undercut everything her book stands for. She said that she wrote it to be “zany” and “over-the-top.” She thought readers would get her “hyperbole” and “satire.” Had she known that this $25.95 hardcover would generate such controversy, she would have set up the story differently.

“I could have easily sanitized it,” Amy reflected. And since she’s actually very huggy-kissy with her girls, “I could’ve thrown in more I-love-you scenes everywhere.”

Now for some surprising tiger doo-doo:

And how about some comments that seemed fresh & interesting:

After hearing this, I had enough. I couldn’t figure out if her book was factual. Did she subject her kids to extreme parenting measures or not? Did she choose their extracurricular activities? Were TV, computer games and sleepovers forbidden? Or were these simple “zany” exaggerations?

During the Q&A, I managed to get in one question. Sort of…

Hey Amy, you say you like unreliable narrators. But that means the narrator’s voice can’t be trusted. So what do we have in your book — are you someone we can trust or not? What do you actually want from us?

She responded with a lengthy explanation about how the book accurately captures her initial outlook as a mom. But she changes by the last chapter of the story. She likes her contradictions. (“I love my book!”) Parenting is filled with contradictions. “So to answer your question, I feel that I am very honest,” Amy said.

Yeah, but is being honest the same as being trustworthy?

I didn’t get a chance to ask that follow-up question because the microphone was handed to someone else. And then, the talk was over.

Afterwards, there was an impressive line of about two dozen people waiting for the book signing. I stood off to the side with a few friends. We compared notes.

“She was totally confusing!” I said.

“She erased herself, she completed neutralized her message,” said one buddy.

“She’s still dangerous because the book is out there and it just adds to the stereotypes about Asian Americans,” said another pal.

Now that I’ve seen Amy, you know what I think about her? Depending on your viewpoint, she had either the fortune or misfortune of excerpting her book in the Wall Street Journal. It appeared on Jan. 8 in the form of an essay with a brilliantly provacative title: “Why Chinese Moms are Superior.”

During the talk, Amy said that she was shown the text of the Journal essay before its publication. But she never had a clue to the “superior Chinese mom ” headline — which was written by the paper’s editor. If she’d seen it, she told us, she would’ve nixed it. (She also would’ve softened her image by adding something about Lulu’s rebellion. “I don’t know how I missed that,” she admitted.)

As for the article, it lifted the most horrendous of Amy’s “zany” parenting moments and presented them with a how-to decisiveness. The reaction to the story had everyone talking about her book before its subsequent release a few days later. By the time “Battle Hymn” hit stores, there was a mad rush to buy it and find out what the fuss was about.

And here’s the key to Amy Chua…not one page of the book matches the airtight clarity of the Journal essay. If there was no essay, I highly doubt that we would’ve gotten this worked up over what is actually a very small book.

During the talk, Amy remarked that she’ll always wonder what would’ve happened if the book landed in the universe without the Journal’s advance fanfare. “Arrogant me,” she sighed, adding, “I had hoped that it would be received as an interesting literary thing.”

Poor Amy. Oh well, things didn’t turn out too bad for her, did they? Both her name and “Tiger mom” are now pop culture phrases. She’s on Time magazine’s 2011 list of the world’s most influential 100 individuals. She has established a platform for global interest in parenting issues. She’s turned down a few reality shows and movie deals.

I’m also quite certain that she and her kids truly love each other. It’s just a shame that this smart cookie isn’t more self-aware or evolved. That’s why I blogged an initial post that went viral: “Parents like Amy Chua are the reason Asian Americans like me are in therapy.” But that’s another story.

Well, it’s getting late and I can’t stand to blog another word about Amy Chua. I’m spent. Time to wrap up this post….

A huge thank you to Jeannie Park, program organizer and the evening’s moderator. Her reason for coordinating the Amy talk: “Seeing someone in person is always helpfuI because it’s humanizing.”

Jeannie is a visionary networker who brought together three steller organizations to co-sponsor the talk. They’re groups that she helped to found: Harvard Asian American Alumni Association; A3 (the Asian American affinity group for Time Inc. employees); and the Asian Journalists Association’s New York chapter. Here’s Amy Chua (left) and Jeannie (right) during the event: 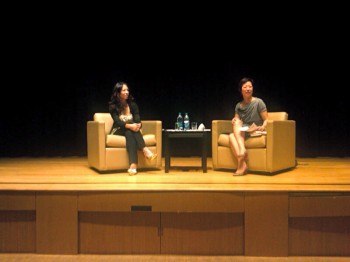 At the very, very end of the night, Jeannie said that she rounded up some folks to have dinner with Amy. The guests included Wesley Yang, writer of this week’s New York magazine cover story, “Asian Like Me.” His angst-y personal reflection on being an Asian American male has set off fresh intra-community debate. The piece is clearly New York mag’s belated attempt to cash in on the Amy Chua Asian action.

Even though this post is already way too long (yeah, I need a good editor!), I must make one more observation….

There are parallels between Amy and Wesley. Amy showed her “Battle Hymn” manuscript to her inner circle, which includes ZERO Asians. In Wesley’s piece, he wrote that even though he is the child of Korean immigrants, he’s never dated a Korean woman. He doesn’t have a single Korean friend either. (P.S. — That might change now that he’s met Jeannie.)

Consider also where these two writers were published…Amy is the darling of the Wall Street Journal, a powerhouse for conservative, white male-dom. Meanwhile, Wesley became the cover story in New York — a magazine so irritatingly, infuriatingly lacking in diversity that, over the years, I have cancelled my subscription at least three times.

While it’s great that the mainstream media now sees the discussion worth packaging to its audience, I remain wary. Remember, they are playing this as a “model minority” issue. I mean, really — we’re arguing over the terrible scars that come with achievement (!).

That’s why I’m grateful to Jeannie. She gathered Asian Americans in a forum where we could discuss matters among ourselves. It was a classy venue for introducing Amy and Wesley to the possibility of extended family. For everyone to meet on conversational terms makes much more sense. This is much better than falling for the old divide-and-conquer game within a white power structure that would keep us quarreling in separate camps.

So let’s not forget who should be in control of the community’s identity. Yes, it’s important to scream and fight and rage against Amy Chua. I probably will never trust her. But she’s not going away. She knows I’m not going away either (Google her name and my first blog post about her is the third link — haha!). This is my new reality. I’m accepting it. And that’s why I’m ready to move on.