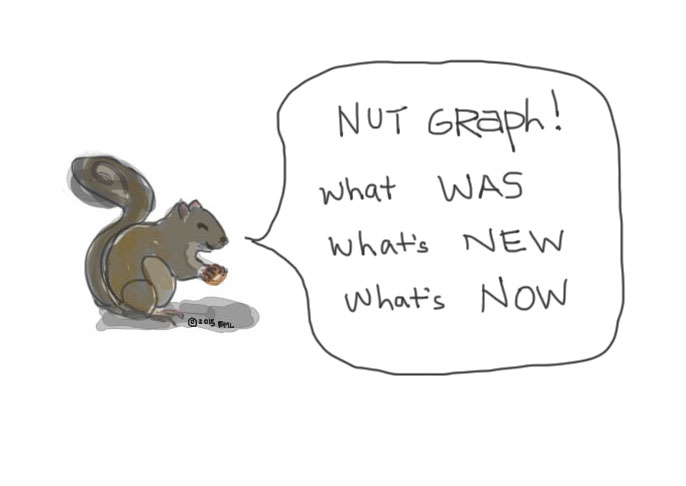 One of the best writing tools ever invented is called a “nut graf.” It can take your word craft to the next level. A nut graf can do magic for a journalistic article, a chapter in a novel, a personal essay, a research paper, a business report, a cover letter, a piece of advertising copy….or even a love letter. 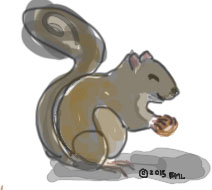 Until now, the nut graf has been a very, very hard nut to crack — haha! But I’m here to demystify the concept. Okay, here we go…

“Nut graf” is an old time-y newspapering phrase. It refers to a tidy little paragraph that should appear near a story’s start. The paragraph — or graf — distills the article down to its essence. This little nut is supposed to be so clear that readers will instantly grasp your story’s basic theme. If they find the summary compelling, hopefully they’ll keep reading.

That’s basically all there is to it! If the nut graf concept feels somewhat familiar, that’s because it goes by different names in other circles:

Other names for the nut graf

A nut graf clues you in on changes that have taken place. It gives you a sense of what was going on, what’s new and what’s happening now. This is a very simple formula. The equation looks like this:

To get the hang of the nut graf, let’s go through a few examples. By the way, a nut graf does NOT need to be the very first paragraph of a story or anything you write. It can even be more than one graf. In long stories, a nut graf might meander over several grafs. In all situations, though, the nut graf needs to be high up in your writing, near the beginning.

But the five examples below all come from articles that start with a nut graf. Wait until you see how efficient nut grafs can be.

Ways to use the nut graf

Imagine that you’re meeting up with some friends for dinner. One of them says: “I can’t believe it — after three years, I finally got a raise. It’s a relief to have a little spare cash again. I really missed eating out!”

This little convo breaks down into the three components of a classic nut graf:

You just received a sweet scribbled note from an admirer. This is what it says: “Before we met, my life was dreary. Now, every day is exciting because of you.”

These  two examples are from “real life” moments. They show that we naturally tend to nut graf. Without even thinking about it, we instinctively reach for the nut graf. We nut graf when we are talking about change in either our lives or a situation.

But there’s more! Professional writers swear by the nut graf. Since I insist that my students read the New York Times, let’s check out three examples from this very fine daily newspaper.

Example #3: The nut graf in a personal essay

Several years ago when I was living in Washington, I met a man the old-fashioned way: tipsily, in a bar. Then I ruined my chances with him the new-fashioned way. I Googled him.

This is the opening line from “So Tell Me Everything I Know About You,” by Joanna Pearson. It ran in The Times as a “Modern Love” column. With a great nut graf like this, readers are sucked right in. We want to know more.

This nut graf shows that you don’t have to put your elements in the what-was-what’s-new-what’s-now order. You can juggle them in a sequence that feels natural and logical.

Example #4: The nut graf in a news-y story

Workers made incremental progress at the stricken Fukashima Daiichi nuclear plant on Thursday, but disturbingly high radiation readings there as well as miles away continued to reinforce fears that Japan’s crisis was far from over.

This is the opener to a detail-filled story: “Radioactive Iodine Detected in Ocean, Despite Gains at Japanese Plant.” It’s dense, the way some news stories can be. But look at what a big job this nut graf does. If you stopped reading right here, you’re still updated on exactly what’s going on with this issue.

Example #5: The nut graf in a feature story

Mark Hogancamp died 11 years ago tomorrow, when five men kicked his head in outside a Kingston, N.Y., bar in the early morning hours. He was reborn months later, after he awoke from a nine-day coma, his memory wiped nearly clean of the details of his life — his early marriage, girlfriends, family, Navy service, thundering alcoholism, homelessness, jail time — and he had to relearn how to eat, walk and think at age 38. Feeling shunned by the outside world, he created his own world, a tiny society called Marwencol.”

This summary opened a piece entitled: “In a Tiny Universe, Room to Heal.” It’s about an artist who worked in miniatures. In this one nut graf, we get a summary of his entire life. All the trauma that made him who he is, is right there. From here, the story unspools the details. But thanks to the nut graf, we now have an overview of what we’re in for.

Well, that’s the nut graf tour. Please feel free to bookmark this page. Many professors, teachers, writers and instructors already have! After inventing this nut graf formula, I put it right up on this blog. Now, it’s yours to share.

By the way, every single post on this blog opens with a nut graf. Click around and you’ll see just how useful nut grafs can be. I hope you’ll keep reading….and subscribe to my blog!   :)