For inspiration, I like visiting Marvin Taylor. Without fail,  just hearing about his life gives me new ideas for reinventing myself…

Marvin is a self-described “queer” boy from the Quaker midwest. He fled to NYC and found work as a nerd librarian. Today, at age 50, he has a hot job running a very cool, private library that archives the history of punk rock, cooking and literature.

Since 1993, Marvin has been in charge of NYU’s Fales Library & Special Collections. Under his watch as its director, the expanding stacks of cookbooks are central to one of the largest food-related collections in the country. His signature Downtown Collection on punk culture is an outstanding assemblage of treasures from the East Village art scene. As for Fales, the actual library contains 200,000 rare manuscripts and volumes dating back to the 18th century.

Every semester, I haul my NYU class across campus to experience Marvin. He operates out of the college’s humongous Bobst Library on Washington Square Park West. Fales is an intimate private library within this monster Bobst facility. Marvin’s collection of primary source materials are available by-appointment-only to students, scholars and researchers. But dude often hosts exhibitions, panels and events that are open to the public. Join his mailing list by clicking HERE. 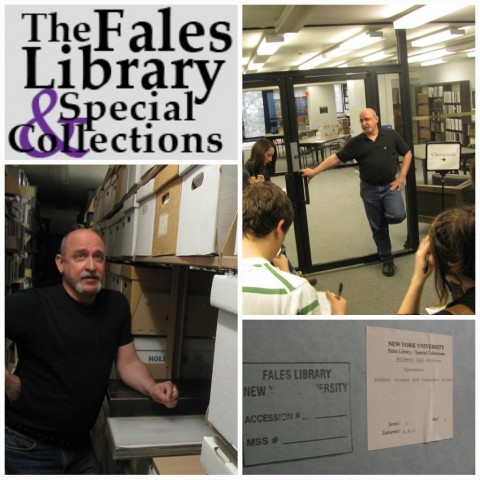 Whenever I bring Marvin one of my classes, I always learn stuff too. Last week, he wandered through his carton-filled, climate-controlled back rooms and pulled out a remarkable array of goodies for us. There was something holy about being thisclose to historical materials. As Marvin says, there’s a “thingness” to books and precious documents. They are things with tangible weight, texture, smells. An item’s thingness is its magic.

The oldest item that he shared was a 5,500-year-old cuneiform tablet. It says, “Zadak gave six goats to the temple.” We also ooohed over an 1,800-year-old papyrus fragment containing 11 lines from “The Iliad” — the scene where Helen stands on the ramparts of Troy: 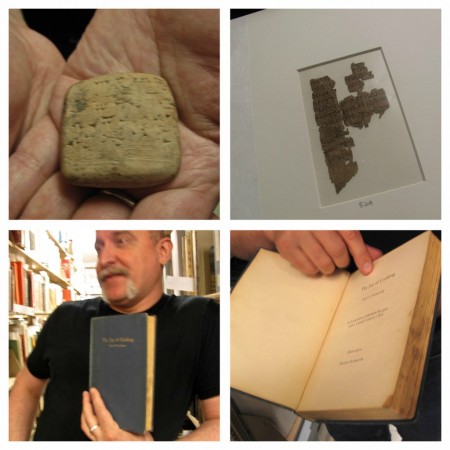 Another intriguing object was this first edition copy of “The Joy of Cooking” from 1931 (the two photos above). Do you know why this book is an enduring bestseller? Think about it: the stock market crashed in 1929. The Great Depression forced formerly wealthy women to fire the kitchen help and putter around their own stoves.

Our 90-minute field trip with Marvin had us whooshing through so many eras that one student said it felt like we were time travelling. When we moved on to exploring punk (1974-1979), Marvin surprised everyone by explaining thatpunk traces its history back to the French avante garde and its obsession with symbolism.

“Punk roots are pretty sophisticated,” Marvin explained. As a revolution, it has had a lasting impact on the New York art scene. “Punk is nothing if not about style,” he added. Back then, its followers believed that “the only aesthetic we have is performance.”

Here are some items from the collection. They speak to a period when the East Village was in the throes of dealing race and gender identity issues, gentrification, and new music. The handwritten page below is from singer Patti Smith’s diary, which she gave to Richard Hell, one of punk’s founding fathers: 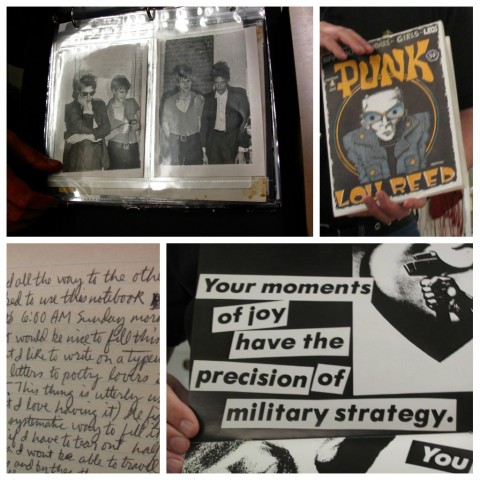 Being with Marvin can get exhausting because he takes familiar ideas and turns them inside out. For instance, what exactly does it mean to read a book? And what is a book anyway?

In answer to that question, he showed us “T.1″ and T.2.” They consist of two rectangular boxes with filled with pages designed by School of Visual Arts typography students. The project commemorates 9/11. Take a minute to recall the role loose paper played during that terrible event. Missing persons fliers. Printed documents blasted out of offices that were decimated by the destruction of the Twin Towers.

Here we are viewing the books:

The concept of an unbound book was new for my class. So was the notion of reading as a literally page-turning experience.

“Trauma leads to collecting, in some weird way,” Marvin observed.
There was more, lots more — enough to leave me vowing to put more trust in my own feelings. I need to believe in both my passions and my journey. If I do that, I will be at peace.

P.S. –The Downtown Collection also includes a stunning book made of lead. It contains posters from the East Village. Here’s a video I made of it during an earlier Fales visit with a different class: