Today, I’m celebrating “Poem in Your Pocket Day.” I’ll bet you weren’t expecting that one from me, were you?  ;-)

All these years, I’ve been waiting to meet a really good man. And now that we’re together, I realize that my first therapist was right. When I was lonely wreck in the aftermath of my divorce, she kept telling me that romance isn’t about a guy. It’s about the overall quality of my life. The poetry of my life.

To be honest, I don’t read enough poetry. That, however is about to change:

I’ve also getting interested in exploring poetry in the Big Apple. The city’s website lists a bunch of offerings and on-going events — from a daily calendar to a poetweet contest.

Just in case we don’t run into each other on the street today, I’ll take my favorite poem out of my pocket and share it with you now. “Touch Me” is by the poet master Stanley Kunitz. During his life, he was known for being an amazing gardener with a messy personal life (multiple wives; estranged from his daughter, etc). He died in 2006 at 100 years old.

“Touch Me” is about an old guy working in his garden as he reflects on love and his beloved. This is such a timely poem because I’m feeling good about being in 50s, having a bf who makes me happy — and finishing spring cleanup on my property. 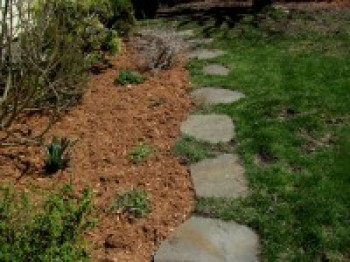 Here’s a path in my yard. Over the weekend, I hauled home 75 heavy bags of mulch. Then, I spread all that shredded cedar bark around the plant beds.

Yes, I’m proud of myself! The effort brought me closer to Stanley’s poem. Wallowing in the dirt made me feel like I was tending to my own joie de vivre in a Stanley-ish way. Joy of life. I can get that for myself.

Anyways, the ending of Stanley’s poem  says it all: “…touch me/Remind me who I am.”

Summer is late, my heart.
Words plucked out of the air
some forty years ago
when I was wild with love
and torn almost in two
scatter like leaves this night
of whistling wind and rain.
It is my heart that’s late,
it is my song that’s flown.
Outdoors all afternoon
under a gunmetal sky
staking my garden down,
I kneeled to the crickets trilling
underfoot as if about
to burst from their crusty shells;
and like a child again
marveled to hear so clear
and brave a music pour
from such a small machine.
What makes the engine go?
Desire, desire, desire.
The longing for the dance
stirs in the buried life.
One season only,
and it’s done.
So let the battered old willow
thrash against the windowpanes
and the house timbers creak.
Darling, do you remember
the man you married? Touch me,
remind me who I am.