I wish that following news from Japan did NOT involve following American public reaction to the disaster. Of course, the racists are beyond evil; I’ll get to them in a second.

But I’m also troubled by the regular folk who are yammering about “taking stock” and “counting their blessings.”

Now that they’ve seen the horrific decimation of Japanese lives and property, some Americans are re-evaluating their own situations. They’re grateful that an earthquake didn’t rock our side of the planet into a tsunami. They watch video of the wounded, homeless and dead — and suddenly feel an appreciation for the homes, jobs and families that they’d been complaining about 10 minutes ago.

So what’s wrong with their epiphany? Well, here’s my pet peeve: Why did it take someone else’s extreme tragedy for these people to realize what they have? Where are their brains — and hearts — that they didn’t feel blessed every single waking day? By any global standard, we Americans enjoy an obscene amount of abundance. We take much for granted.

Which leads to my second pet peeve: Are we so self-centered that we can only respond to Japan’s nightmare in comparison to our own belly buttons? I’m the first one to admit that I love talking about myself. But what’s going on overseas exists apart from my obsessive navel-gazing. The issue demands my attention — and respect — on its own terms.

Given the situation, I think there are only three decent responses:

Of course, the ignorance of the annoying people is nothing compared to the truly ugly Americans. AngryAsianMan.com explains it all in his rant, “hey you f@#king facebook idiots, the tsunami is not payback for pearl harbor.”

Watch out for the benign racists too. I met one the other day at my gym’s morning fitness class. It was the smiling instructor. She approached me after the workout and asked, “Did you have anyone in Japan?”

Whaaaat? It took me a minute to register her question. Oh, I get it — she sees my little Asian face and assumes I’m Japanese….

“Uh, no,” I said, frowning. “I’m Chinese.” As I left her, did I imagine that she seemed disappointed? By the way, the instructor was a Caribbean-American woman of color. Would I ever walk up to her and ask, “Do you have anyone in Libya? Or Haiti?”

Well, I’m done venting. I’d like to close by directing you to Gil Asakawa, a Japanese-American in Denver. On his NikkeiView.com blog, he has a superb reflection on what it was like being a kid in earthquake-y Japan (before his family immigrated to the U.S.). His thoughtful list of resources includes where to donate, which I’m using as one of my guides.

Now if you’ll excuse me, I am going back to googling, texting my donations via cell phone and listening to the radio.

More on my news sources: 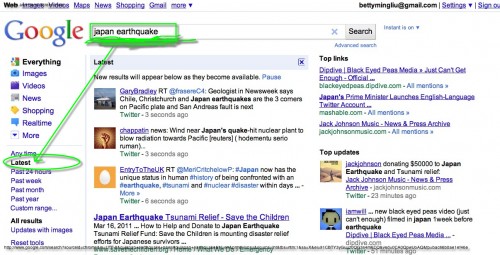 Pick a time frame for your Google searches. Click on "Latest" for breaking news.