Happy Lunar New Year! Here’s an old photo from the holidays. I remember when Mom took it. We were in a Chinese restaurant. She kept telling me to smile but I refused. How could I, when the fabric of my China Doll was so uncomfortably scratchy? Besides, everyone was watching our little drama — and I just HATED being on display.

Yet here I am, decades later, publicly airing my personal stuff on this blog. While the process is therapeutic, it’s still not enough; hence the weekly visits to blather at the shrink’s. The whole process has my 15-year-old daughter shaking her head.

“You’ve been a grown-up for 30 YEARS and you’re still in therapy talking about your parents!” she said the other day. “It’s not even like they’re here to annoy you anymore. You’re 54 and they’re both dead!”

Ha. You think it’s that easy to get rid of the old folks? Their insanely narrow-minded judgements, the harsh words, the spankings — those scars from their tough love are still very much a part of me.

In recent weeks, there’s been much public discussion about the pros and cons of bad parenting, especially the version advocated by certain Chinese and Asian immigrant parents. We don’t need to rehash that crap here. Instead, what interests me is the new terrain ahead……

Anguished reader comments keep arriving on this blog. Who knew there could be so much emotion invested in our childhood traumas? Or that there was such a need to vent? (Or that so many Asian Americans are in therapy?)

The New Year might be a good time to put the past in perspective. Having these comments from people I’ve never met has suddenly given us the potential for community. I long to hear more. Most commenters only shared their troubles without explaining how they overcame their situations. How did you actually escape with your lives? 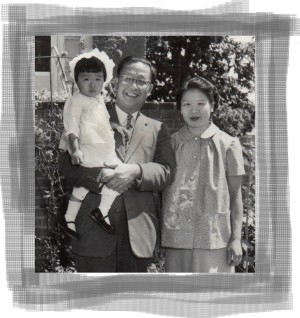 My need to flee arose very early. I had a childhood that threw me off-balance. If I look worried in this photo, it was with good reason.

My issues began the minute I could hold a crayon. I did this deed with my left hand. It was an innocent gesture that sent my father on a mission to break me of unacceptable, unlucky behavior.

The message was clear: I just couldn’t do anything right. He yelled whenever he caught me writing with my left hand. The hounding continued until one of my elementary school teachers told him to stop. After that, he settled for making sure that I was a proper righty in my use of scissors, chopsticks and forks.

This was a minor skirmish in our on-going war. As a child and teenager, my struggle to escape was self-destructive. I would flunk classes and eat junk food until my face exploded with pimples.

Thankfully, I discovered therapy in my 30s. At last, a constructive path. There have been some hard choices, like getting divorced. But along the way, I’ve gotten happy too. I’m even recovering my handedness.

Two summers ago, I started oil painting classes and consciously chose to hold the brush in my left hand. These days, I struggle to eat as a lefty too.

I’ve also been on a campaign to explore body movement. In recent years, I’ve fulfilled two dreams by learning to play the drums and dance salsa. Did you know that a drum set is the only Western instrument that requires its player to simultaneously use all four limbs (two arms, two legs), with each extremity doing something different? Salsa is like that too — constant movement with no right- or left-handed dominance.

That’s just one of my stories. I have more. I’ll bet you have a bunch too. Would love to hear how you triumphed over your childhood in matters large and small. This isn’t an Asian thing; our conversation is for everyone. After all, abusing children is an equal opportunity activity among parents.

I’d like to offer this blog post as a safe space to vent. Putting your experiences out there can be very freeing. It is also helpful for the rest of us to hear your story. Let’s see where this goes. We have each other. You are not alone.     :-)

Update on Feb. 8, 10:31 p.m.: I’m really glad you’re all starting to use this page to chat about your lives. Even though I keep wanting to jump in, I’m determined to stay out of the comments section; don’t want to interrupt your flow. But I did want to share an insight I had yesterday at my shrink’s because it completes this post for me…

There were only a few minutes left to the session. I was reflecting on how fulfilled I feel these days. Then my therapist referred to this post (yes, he reads my blog!).  He wanted to know how I feel about my parents now. That’s when I realized that I’m okay with them. Truly. We loved each other! Yes, they were weird and abusive. But I’ve gone on with my life.

So the revelation is that I’m resolved with my folks.  And in the process, they’ve become my muses. After all, they’ve given me tons of material to write about. Isn’t that ironic?  :-)