Did you know that vegans and strict vegetarians can’t have Rice Krispie Treats? The problem is the marshmallows. The puffy white pillows of sweetness that hold together these crunchy, chewy snacks are made with gelatin. And gelatin is a substance derived from the bones and connective tissue of farm animals.

Too bad, because Rice Krispie Treats are a relatively inoffensive dessert. It’s also easy, fast and cheap to make. I had to stop serving these goodies because my teen daughter and many of her friends are vegetarian — there’s even one vegan, which means that she will not eat anything made by a living, non-human creature (so no cheese, milk, eggs or even honey). I’m also encountering an increasing number of no-meat folks in my classes and social circles.

But I recently came up with fabulous alternatives for the standard three ingredients used in this recipe. Forget about Rice Krispies, marshmallows and butter or margarine. I’m working with:

Warning: The Dandies cost $6.99 for a 10-ounce bag. That’s four times the price of a $1.69 package of regular marshmallows. Thankfully, the other ingredients are in line with their conventional counterparts. At Whole Foods Market, I was charged 2-for-$7 for the Erewhon cereal and $3.69 for vegan butter. The cereals and Dandies are also available online 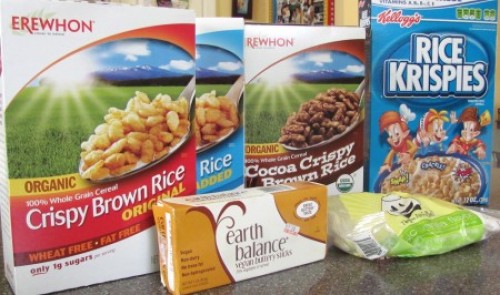 In terms of the health stats, “Original” Crispy Brown Rice has 1 gram of sugar compared to 4 grams in Kellogg’s Rice Krispies. It’s also lower in calories (110 calories per cup vs. 130 calories for Rice Krispies). Erewhon’s “No Salt Added” cereal is bland but it only contains 10 milligrams of sodium while all other versions weigh in at 180 to 190 milligrams. Once you start fooling with the cocoa versions of any cereals, though, it’s all about sugar and calories, so let’s not go there.

These puffed rice cereal experiments have received rave reviews from very picky taste testers. Some of my college students tried the Asian-y Rice Krispie Treat and gave me an A+. As for the Crispy Brown Rice versions (cocoa, granola, plain and sesame seed), they were hits with my daughter’s crew: 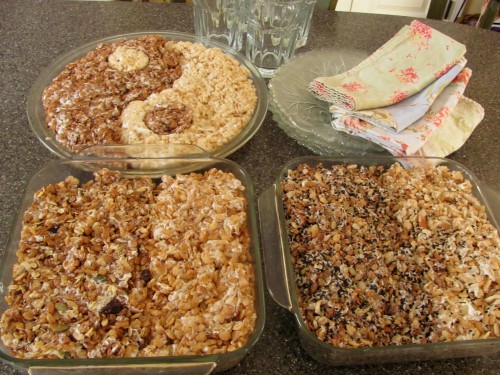 Keep in mind that the basic recipe calls for six cups of cereal and no additional dry ingredients. You can get away with adding maybe 1 cup of nuts, sesame seeds, granola or whatever. But there’s just so much gluing the marshmallows can do before too much dry stuff makes it all apart.

So for professional-looking Treats, limit your max mix of dry ingredients to about six cups. E.g., If you want to add 1 cup of granola, then only use 5 cups of cereal. 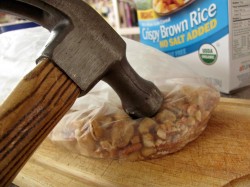 The size of your additions matter too. For instance, sesame seeds, which add a distinct savory note, are tiny enough that an extra cup of them won’t make much of a difference. However the Asian-y Treats feature maple roasted cashews, which are kind of bulky. It helps to give them a good hammering on a cutting board, to whack them down to size.

This next closeup shot, starting from the left we have: the Asian-y Treats, Cocoa Brown Rice, Sesame Brown Rice and Granola Brown Rice. The tough guy standing guard is our old cat, Lucky. 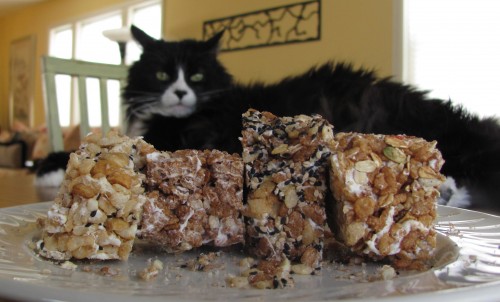 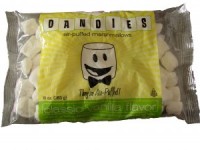 If you’ve ever made regular Rice Krispie Treats, be forewarned that the Dandies are different.

Vegan marshmallows are more lumpy than airy. They also take longer to melt; depending on your stove and pan, you could be stirring glop for upwards of five minutes.

What’s interesting is that the melted Dandies cool down a bit more slowly than regular marshmallows. That makes it possible to shape them without getting third degree finger burns. 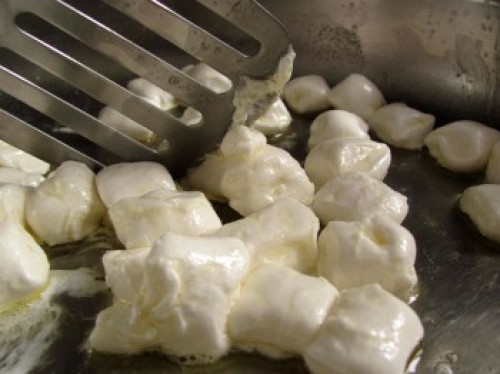 By the way, my teen tasters were impressed with the yin-yang Cocoa-Krispie Treat. I made if for the Vegan Girl’s 16th birthday. She popped out the circles that I’d just taken pains to mold into place. She said that eating them was like getting the rose from the icing on a traditional birthday cake. Cute. 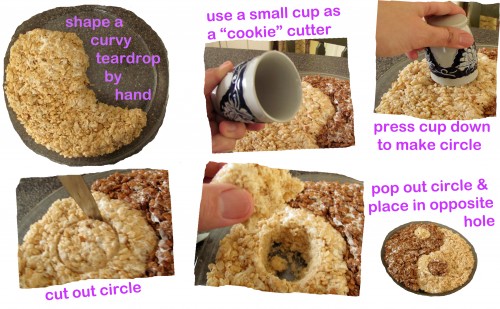 Now for the recipe: 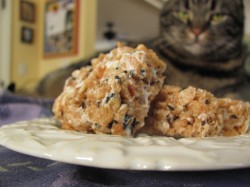 At some point, I might add a cooking demo for you right here. It will show me making Rice Crispy/Krispie Treats. One of my students is working on the video. I can’t wait to see what she comes up with!