This morning, I’m heading out for the first day of my spring semester. I’ve got my BlackBerry, my iPad, my lesson plans…but most importantly, I’m holding Ellen Stewart close to my heart. Enlighten me, Ellen! Help me make the most of myself and my students!

The late great diva of American avant garde theater recently died at age 91. She lived and pursued her dreams in remarkable ways.

Here was a 40-something woman clothing designer who knew nothing about theater. But once she decided to stage plays, she went on to encourage young unknowns who became the biggest names in the business (Al Pacino, Bette Midler, Harvey Fierstein, Philip Glass, anyone?).

She operated La Mama Experimental Theater Club on a miserly budget and rich intuition. She was a MacArthur Foundation genius award winner who created her own rule book and didn’t care about commercial success. Ellen was a black woman who was racially color-blind — yet believed in “multicultural” before the word was invented. 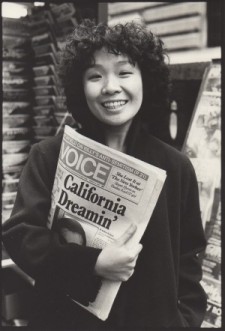 Delusional: this perm 'do made me feel cool

I was lucky to interview her once, during my early 20s. At the time, I was a sheltered Chinatown nerd doing a college internship at the Village Voice. The experience exposed me to the Downtown arts scene. After it ended, the paper hired me full-time as a secretary. For the first time ever, I had busted out of my immigrant circle!

Along the way, I got acquainted with who’s who on the culture beat. A year later, I went off to Columbia University’s Graduate School of Journalism. And for one desperate homework assignment, I decided to do a little profile on Ellen.

The interview was terrible. Even though I knew Ellen was a major name, I didn’t understand anything about theater or performance art. With no context for her world, I was shocked to visit her in a shabby little space that was her so-called “theater.” But she was patient. And she treated me with kindness. Her generosity taught me more about interviewing than I’ve ever learned from a journalism text book.

Afterwards, I read stories about La Mama with great interest. I even went to a few plays and performances there, especially ones that featured Asian-American artists like Ping Chong. Not everything dazzled me. But that wasn’t the point. I was part of the moment. We were alive.

What follows is a story that ran in the Sunday New York Times. It’s a tribute consisting of comments about her from some of the talents she nurtured. As I read them, I kept thinking, wow, if only people someday felt like this about my work with others. Now THAT would be an accomplishment.

The quotes that I loved the most, I’ve highlighted in purple italics. I’ve also included little head shots of Sam Shepard and Wally Shawn, just because I loved what they said. (Plus, Wally is one of my favorite actors.)

So here’s to Ellen Stewart, earth mother extraordinaire. What a legacy. I am thrilled to have the good energy of her presence on my blog. Okay, here’s the New York Times story:

ELLEN STEWART, who died on Jan. 13, was in her early 40s when she founded La MaMa Experimental Theater Club in 1962. At an age when some people settle into complacency, she built one of New York’s most influential cultural institutions. Half a century and more than 3,000 productions later, she leaves behind a legacy that includes pioneering the Off Off Broadway movement, importing international theater work before it was popular, and providing a home in the East Village for experimentation. While an era has ended, her theater and its vast population of artists and admirers carry on. A few of them were asked by Jason Zinoman to recall the woman known as Mama. Here are excerpts from their responses. 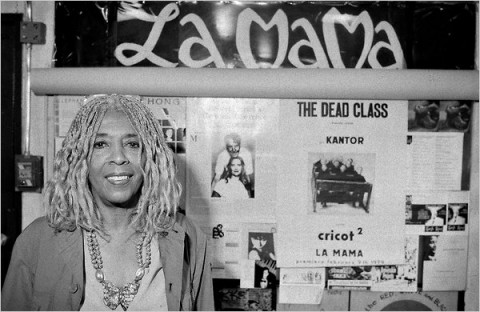 MICHAEL LOCASCIO, PLAYWRIGHT My one-act “A Corner of a Morning” was the first original play presented at La MaMa. At that time the theater was in the basement of a shabby-looking building on East Ninth Street. There was no indication that Ellen’s pet project would develop into an institution that would change American theater forever. She was simply determined to provide a space for young, unknown playwrights to present their work. She never read any of the plays. She would hold the script in her hand, and if she got her “clicks,” as she called it, the piece would get the O.K. Her great talent seemed to be to allow the free play of her instincts. I suspect that in the beginning she felt what she was doing more than she knew what she was doing, and the wonder is that her feelings proved to be right on the mark.

SAM SHEPARD, PLAYWRIGHT [When he first met Ms. Stewart] I walked up to her and said, “I have this play.” And she said, “Let’s do it, baby.” And she did. It was a one-act, never published, and is lost now. I was very lucky to begin when Off Off Broadway was starting with Caffe Cino, Judson Church, Theater Genesis. But Ellen was the most generous. She just put shows on. I could bring something written on an envelope, and Ellen would put it on the next day. She was not discerning. She had taste, but for her it was just a great big carnival. She was very sexy, a bombshell, the Nina Simone of Off Off Broadway. She also had an outrageous sense of humor. I would call it a transvestite sense of humor. It crossed all boundaries and had a real sexuality. She was a New Orleans woman. She was not New York at all.

SALLY KIRKLAND, ACTOR I had a nervous breakdown in 1966, and I was going to give up acting. Then Ellen called and asked me to star at La MaMa in “Changes” [by Megan Terry]. She saved me. She also asked if I would appear nude, and I said, “Yes.” She made me the first nude actress in the La MaMa troupe. This was before “Hair.” I remember someone from The New York Times calling me up and asking why I did nudity. I said, “You can’t carry a gun on a naked body.” We were against the Vietnam War. Ellen was a brilliant woman, and she had a way of making you feel brilliant.

BILL IRWIN, ACTOR When I worked at La MaMa in the early ’80s, the question posed around was: Does Ellen’s accent change depending on who she’s talking to? I can’t remember who first put the question forward in my presence — might have been Julie Taymor, who was directing her piece “Tirai” (on a tiny budget) — and she might have been quoting Joe Chaikin. The conviction was usually maintained that indeed Ellen did have different accents depending on what she needed from people, and that she had a money-raising accent and way of speaking — just slightly different than her bell-ringing and preshow-speech voice. Such conviction was maintained with admiration, for the most part, I think. Of course she had a “shame on you” tone and diction too, when it was necessary and the green room was full of coffee cups, again, and a weary Mama voice when exciting possibilities did not pan out to full expectations. The next day always a strong, even voice of command for whatever needed to be said, and to whomever it might need to be aimed.

ANDREI SERBAN, DIRECTOR I left Romania to work at La MaMa when nobody knew who I was, but Ellen knew. Her perception of people and theater was unique. She created the perfect atmosphere where one could freely explore a vocabulary that goes beyond understandable language. She reminded me of the Eleusinian Mysteries, where singing and dancing were the origin of ritual, the roots of theater. My best work [“Fragments of a Greek Trilogy”] was done under her spells.

WALLACE SHAWN, PLAYWRIGHT She went about as far as you can go in refusing to draw a line between the personal and the professional. There was a way she wanted to live, and there were people she liked to be with. She didn’t even like some of the funny activities that her favorite people enjoyed so much. She liked them. She created a beautiful nest, beautifully decorated with straw, worms and trinkets, and certain lucky people got to lie around in it.

PEGGY SHAW AND LOIS WEAVER, PERFORMANCE ARTISTS When our company, Split Britches, started performing there 20 years ago, she got us — maybe not every nuance of our gender queerness — but she got us. She flirted with Peggy and always coaxed out her butch kisses and attention. She personally accompanied Lois to Macy’s and spent hours in the lingerie department choosing just the right slip for her costume in “The White Whore and the Bit Player.” We knew we were definitely family when she wore a “Lesbians Who Kill” T-shirt to ring the bell to announce our show of the same name.

EDWARD ALBEE, PLAYWRIGHT When I came to New York, there were two really important theater companies: Ellen’s La MaMa and the Living Theater. They gave me my education in the theater. I learned about the avant-garde and about the possibilities of theater. What I liked most about Ellen is that she took chances. She was willing to fail.

PAUL ZIMET, DIRECTOR AND PLAYWRIGHT One of my many strong recollections of Ellen is coming into the theater to prepare for a show and finding her sweeping the floor of the stage or lobby. There were other people to do it. It had probably already been done, but it was important to her that the space where we made theater should be immaculate. Here was the founder and artistic director of a world-famous company tending to the mundane but essential tasks of making art. She taught me that as a theater artist, in addition to ambition and vision, you need a lifelong willingness — indeed enthusiasm — to sweep the floor.

RICHARD FOREMAN, DIRECTOR AND PLAYWRIGHT She made La MaMa unique in bringing foreign troupes to New York City, but not only the big international superstar experimentalists like [Tadeusz] Kantor but the small groups no one had ever heard of. That was a mighty and important thing.

JOHN KELLY, PERFORMANCE ARTIST If Ellen Stewart loved you, you were forever stuck in her heart. She could be an infuriating lover, but when wanderlust beckoned, you always knew the light would remain on for you when you returned. She never played it safe, never pandering, never buying into the need for a hit or a move uptown.

Downtown was her circumstance. Truth based on instinct was the goal she set for herself, and required of those she took into her wing. The Ellen Stewart wing is second to none.

If you’d like to read more, the New York Times obituary on Ellen Stewart offers a lot of good background. The piece covers topics that she rarely discussed. Personally, I was sadly fascinated to learn that Ellen, who called her theater folks her “children,” was actually a single mom who outlived her only child, a son.