I’m already fantasizing about those 2011 vacations! To preserve cash, I’ll be on AirBnB.com again. This travel listings website offers a terrific option to booking hotels. Folks use it to post the availability of their spare bedrooms, houses, lofts and apartments. The guests can be impressive; the Obamas just stayed at an AirBnB listing in Hawaii.

But forget about our nation’s president. Here’s more about frugal me…

Last summer, I tried AirBnB for the first time and loved it. My daughter and I spent a week in Los Angeles visiting friends. They had other house guests and couldn’t host us for the entire stay. Scrambling for a hotel room looked depressingly expensive. Then I heard about AirBnB, which was created in 2008. Logging into the site, I suddenly found myself chatting with prospective hosts via an embedded Facebook link.

The setup felt modern…and, scary. Stay with strangers in a private home? Really??? In the end, only one listing met both my price range and comfort level. 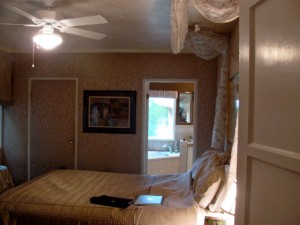 Right away, I was hooked by the photo of a feminine, all-beige bedroom. The potential host was to-the-point and professional in her messages. Her rates were $75 for one person and $92 for double occupancy. While she also had a second, smaller bedroom ($65 for one guest and $82 for two), I opted for the larger space.

When my daughter and I landed in L.A., we were nervous about going to the house. But once we saw it, we were charmed. 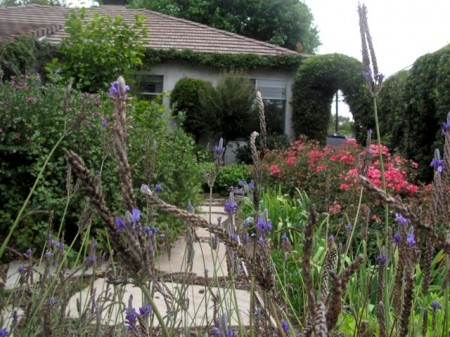 Our host was Patricia Armhein. She was welcoming without being intrusive. A lost art. 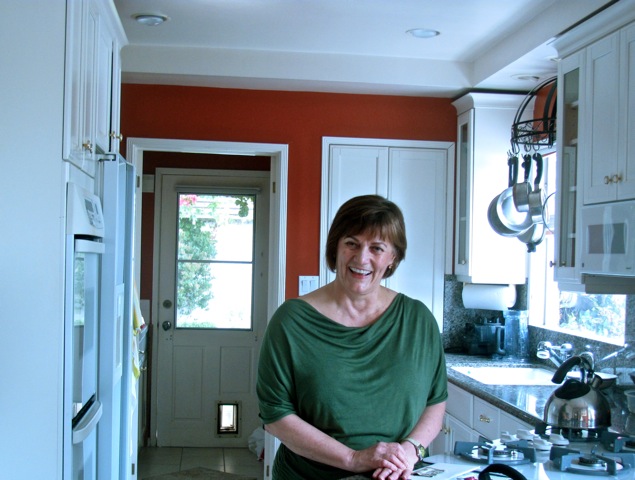 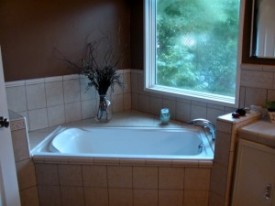 For our money, we stayed in spotless sleeping quarters featuring a queen bed, WiFi, cable TV, local phone service and a locked door. The private bathroom had a big tub that looked out on the garden.

As guests, we had full run of the house, including the kitchen, back yard  and laundry room.

Street parking was hassle-free. And an electronic home security system reinforced the fact that safety was a priority.

Meeting Patricia ultimately became a cosmic lesson in finding good energy with a kindred soul. We’re both older, single women with dating war stories. We both teach and paint. She’s a licensed acupuncturist and I served on New York State’s acupuncture board. She’s a therapist who is into holistic healing and I adore therapy. She has a brown-walled master bathroom and the family room in my house is brown. 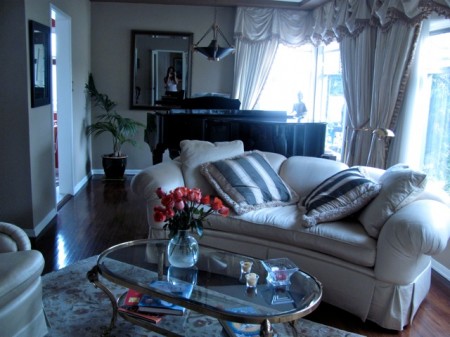 As a fellow detail person, I liked her personal touches. Fresh flowers, yes! 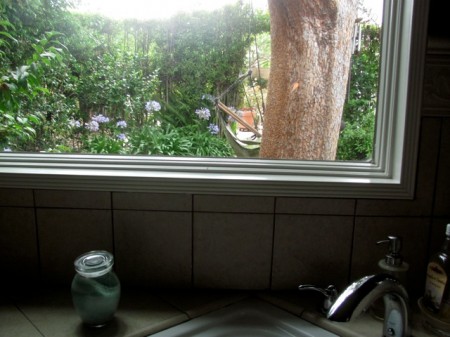 After a hard day of shopping on Rodeo Drive & the Goodwill Store, I’d soak in the tub. 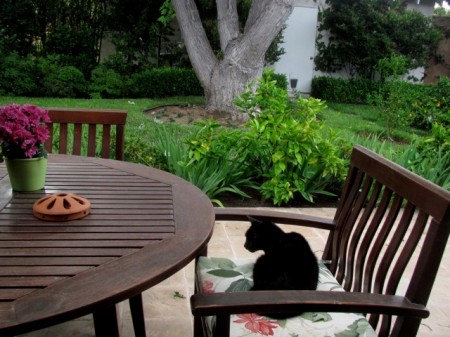 Of course, Patricia is a cat lady too.

I couldn’t get over the fact that Patricia was doing this AirBnB thing. What guts. I would be terrified to throw open my front door to the world. But it’s working for her. “I’ve met really interesting people from all over,” she kept saying.

When she first thought about renting, she went on Craigslist. Then a guest mentioned AirBnB. She was instantly sold on its focused environment and helpfulness in setting new room rates. (“I try not to be the most expensive and not the cheapest,” she explained). There’s no cost to list. “I keep all the money except for the processing fee,” she said.

Her new online listing instantly upgraded her clientele. “Some Craigslist people wanted to bargain,” she recalled. “But they’re not grinding you on AirBnB. I learned that when people are willing to pay, they’re generally not creepy. Several of my ideal guests have been guys, all single, who were never here and never cooked.”

I’d be happy to stay with Patricia again. Except that in the future, we’d have to book for a whole month. The reason? She recently learned that Santa Monica regulations will only let her take in “tenants” who stay at least 30 days.

There’s a similar situation brewing in New York City. Local government is cracking down here too. In May, a new law takes effect that will ban “short-term sublets” of less than 30 days, according to a story that appeared on DNAinfo.com.

In response to my inquiry about the issue, AirBnB Chief Executive Officer Brian Chesky replied with the following email:

Hey Betty, The NY legislation does not affect a great deal of our users, as it targets landlords converting buildings to illegal hotels. Since we are in 10,000 cities around the world, and we facilitate many different arrangements, from short-term to long-term, shared space (roommates) to vacation rentals, we advise people to visit their local government website and learn about local rules and regulations since there are tens of thousands of different types of activities happening on our website. For what its worth, President Obama just stayed in one of our properties for Christmas vacation, so this is something that is spreading and going mainstream: www.airbnb.com/rooms/56356. We are a 21st century business model, so we need 21st century rules.

Hmm, well, I’m willing to go with that spin on things. Investors are apparently buying it too — in November, AirBnB successfully raised $7.2 million to grow its business. The company is at the forefront of a whole new way of traveling. A recent New York Times story called these Internet sites “social B&B networks.” They’re transforming the sleepy, traditional bread & breakfast concept for value-oriented travelers like us. Nice.

P.S. — I have a post about our L.A. vacation. Please ignore my bad hair in the first photo. I was desperately in need of a cut but summer school kept me so busy that I didn’t get it done before our trip.

P.P.S. — Every semester, I have a student or two who is into CouchSurfing.org. At this site, generous, super-brave (and somewhat crazy) souls let travelers stay in their homes for free. Not my thing on any level, but intriguing.   :-)

Update, Jan. 18, 2011: When you make bad laws, stoopid things happen. In NYC, the crackdown has meant that an owner can NOT rent out an apartment for less than 30 days. A recent story in the New York Times reported that a loophole has backers of the new hotel bill “wondering if they have opened a Pandora’s box.” (The piece ran Jan. 15th:  “Law on Apartments as Hotel Rooms Has Unintended Effect.”). The story mentions a former Upper West Side hotel where backpack-toting travelers have been replaced by a homeless shelter for 200 men.  I’ve got nothing against helping those in need; my point is that the law has wasn’t carefully thought out. Other cities, take heed.