On Saturday, I blogged about “Parents like Amy Chua are the reason Asian Americans like me are in therapy.”

Other bloggers had a lot to say about the topic too.

Taken as a whole, the collective reaction was a chilling, community-wide scream over an issue so deep that it’s practically genetic.

For me, the scope and depth of what’s being said has been mesmerizing. On some weird level, I almost want to thank Chua for jump-starting our focus on a long-overdue discussion.

Clearly, this is about more than just one sadly misguided author-mom who is promoting a scary book about Chinese-style tough love.

Our real problem is that we’ve all been conned by Confucius.

The ancient, so-called sage preached that children should honor and respect their elders in a way that amounts to emotional child abuse. It has led to a goal-fixated, parent-centric, male-dominant culture that continues to demoralize most of us.

Under Confucianism, kids work hard, excel at school and must avoid bringing shame on their families. In principle, these might sound like reasonable expectations. But the reality can be very different, especially when you throw in the old guy’s teachings for the female gender: a woman must obey her father, husband and son(s). What a crime that Asian society has been boxed into these rules for centuries.

Now that the topic is on the table again, I hope we can examine how we’ve been conned into accepting awful traditions. While there’s plenty to admire in Chinese and other Asian cultures, I wish we could make a group jailbreak from the bad stuff. Let’s become ex-cons and stop being victims!

The effort to do that is worth it. Think of all the creativity, fulfillment and genuine community that lies ahead…

The struggle to get beyond my past has been huge. My parents, who were immigrant PhDs from China and South Vietnam, didn’t talk much about personal happiness or self-expression. As the first-born of two daughters, there was no opportunity for me to indulge in such giddy foolishness. Forget about individual interests and preferences.I was too busy trying to be their pseudo-son. (Did they view me as castrated? Or eunuch? Not sure…)

Over the years, my fury against Confucius has kept building. His brutally narrow-minded advice has led to five thousand years of mediocrity — and not just in China. The Confucian chokehold has been strangling more than “just” the country’s billion or so people, who account for roughly 25 percent of the planet’s entire population. Versions of similarly rigid belief systems exist in nearby Korea, India and Japan. Then there’s the diaspora — the natives of each country who have scattered around the globe. Taken together, these numbers add up to a lot of stagnant human energy.

1. Since I obeyed my parents, I wasn’t encouraged to think independently. My mom limited my friends to Chinese kids in our Chinatown neighborhood. My dad decided what courses I took in college.

2. Family and family honor always came first. We never publicly aired anything that might make us “look bad.” I grew up confused about things but kept my mouth shut. It was hard to make and trust new friends.

3. The insular lifestyle had me socially awkward. I went to church instead of parties. I didn’t know how to date or talk to boys. Being around people of other races was uncomfortable.

4.  Since the family marched as a unit, being an individual was never discussed. My sister and I were constantly compared to each other. During our late 20s, we were so competitive that we barely spoke. Let’s not even get into how our parents complained that their friends’ kids were smarter and better than us.

Check out these photos of my younger sister and I. Mom picked out our clothes. Even though we’re two years apart, she enjoyed dressing us like twins. Is this twisted or what?!

Looking back, I know our parents loved us the best they could.

But as my first shrink used to say, parents can’t give what they themselves never had. Unfortunately, what they provided was difficult and suffocating.

Well, no wonder. They lived through poverty, hunger and war. It was also tough immigrating to the U.S. as adults who didn’t speak the language. Their survival deserves my respect. But that doesn’t mean they were great parents.

When I was 19, my father died of a heart attack. Who knows what would’ve happened if he had held on and run my life. With Mom all alone, my sister and I tried to take care of her. But then I started therapy in my 30s and suddenly realized how needy my mother was. The breakthrough moment was realizing that I could get mad. What a novel idea: it’s possible to love my parents and still be angry with them.

The last 20 years have been a personal campaign to liberate myself. Therapy provided very helpful tools.The recovery process took off once I believed that my Chinese family didn’t rule me. It was simply a passport into the universe. Today, I define “my people” as the seekers who care about community, change and new ideas.

Breaking out of the emotional and cultural prison means that at last, I can protect Little Betty. Together, we journey on, learning positive ways to discipline, set boundaries and show love.

Along the way, I’ve made my peace with my folks. As an ex-con, they’re essential to my personal story but they don’t own it. Since they’re both dead, they can’t hurt me anymore either. Mom, who passed last year, has even become my muse. And I’m starting to write more about my father, which means something (although, I’m not exactly sure what). 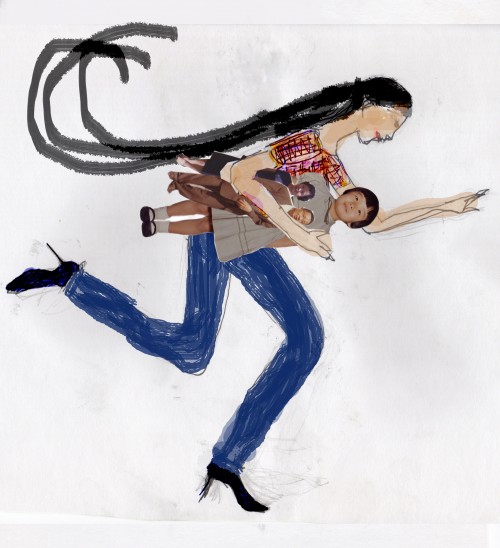 The jailbreak has me running as fast as I can from the more unfortunate aspects of Chinese parenting. Of course, blown opportunities are gone forever. But even though Dad prohibited self-discovery, I have control now — so I’m finally studying art and dance! In raising my own child, the goals aren’t about family pride blah-blah. My greatest hope? That she finds happiness and love by following her dreams.

The public forum offered by blogging gives me a chance to reflect on this material in a unique way. Once the static comes out of my head and goes onto the computer screen, it loosens its grip on me. Then, having people read me creates clarity and…validation!

So here’s my suggestion. Let’s start an “Ex-Con Honor Roll” in the comment section below. How have you managed to make a break with childhood traumas? What are you wrestling with now? That’s what I’d love to hear more about. But having said that, please still feel free to comment on whatever you want. :)

Btw, I’m done talking about Amy Chua. To wrap up, here’s a last look at the reactions that some other bloggers had to her book.  So interesting.

Lots more interesting stuff being published, from all kinds of angles.

Also want to point you to a piece that thoughtfully details the historic roots of this whole Confucian mess. “The Chinese Mom Controversy” ran in The Boston Globe and was written by Patricia Wen, an old friend and former colleague.

Update for Thursday, Jan. 20th: Thank goodness Confucius doesn’t represent all ancient Chinese thought. There were also the Daoists, philosophers who were at the center of acupuncture and Chinese herbal medicine. Please check out my next post: Chinese Medicine master Jeffrey Yuen’s essential health and beauty diet regimen.