Chinese banquets go on 24/7 to celebrate just about any occasion. Starting Thursday (Feb. 3), there will be endless worldwide feasting to the arrival of Lunar New Year. If you’re invited to a Year of the Rabbit event, here’s a chance to build awareness by tactfully asking the host what’s up for the soup course. And if you’re hosting a dinner, there’s still time to take shark fin off the menu.

This delicacy gets to the banquet table as follows: fishermen catch a shark, slice off its fins — and toss the helpless, live, bleeding creature overboard. It can’t swim anymore and suffocates as it sinks into the ocean.

Meanwhile, its fins are dried and sold at premium prices in Asian markets. Restaurants reconstitute the fins in water, shred them and simmer the strands into a tasty, gelatinous broth. Just before serving, the soup is finished with a splash of dark, pungent vinegar. Some progressive restaurants are serving a shark fin alternative made from a gelatin base. But not enough establishments are in the conservation mode — yet.

To learn more about the issue as well as about the role of sharks in the eco-system, check out the website for Stop Shark Finning. This advocacy group has posted a bunch of very watchable videos about the whole topic — including wrenching footage on this horrible practice.

The timeline to protect sharks from finning began in 2007 at the United Nations. A few weeks ago, Pres. Obama signed into law new regulations to close the immoral and inhumane practice of shark finning. And starting this summer, Hawaii will become the first state to ban the sale of shark fin soup.

You can also hand out Chinese-English bilingual fliers to restaurant owners and others, letting them know how you feel about the issue. The Humane Society has created fliers for us to download for free at its website.

I don’t want this post to be a total downer. So I’ll segue now into photos from a relative’s recent Chinatown wedding banquet. It was a wonderful event — and also the first one my daughter has attended since she was a baby. The bride was Latina (finally, adding more diversity to the family tree!) and she was gorgeous.

And yes, there was shark fin soup. But yes, it was also a chance to discuss the issue and build some awareness for the future. 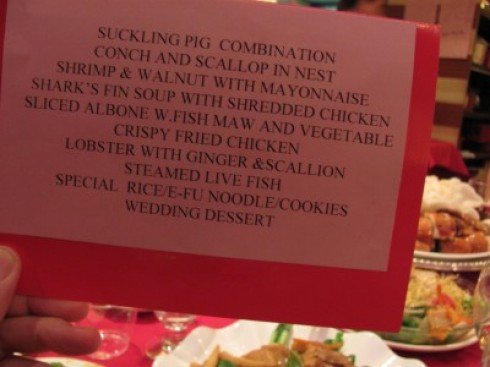 As an agricultural-based society, a proud Chinese host serves tons of meat & seafood in a show of prosperity. You'd never serve rice during the meal & stuff your guests with cheap carb filler. So rice and noodles come out at the end, just before dessert. 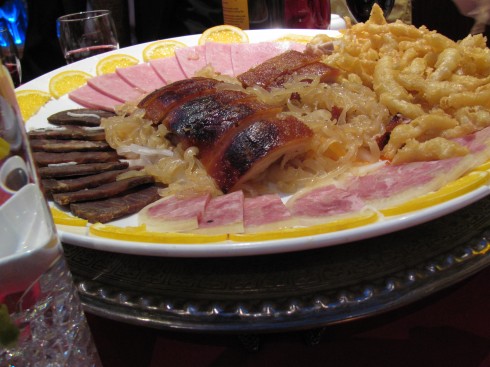 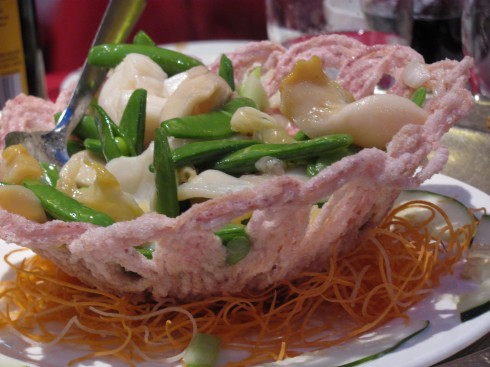 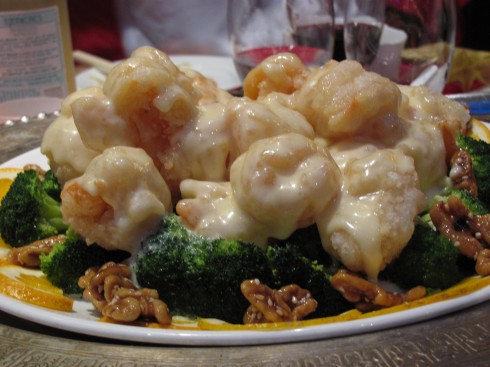 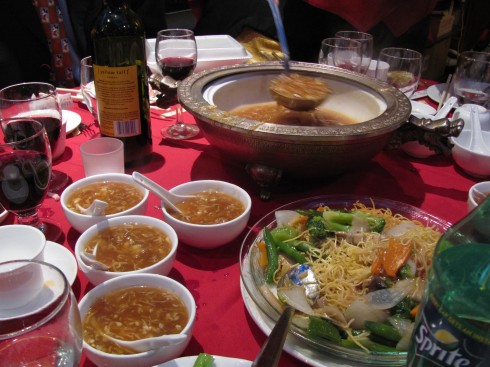 Shark fin soup. For the record, the newlyweds had no idea of the controversy until I explained shark finning to them -- after the banquet. 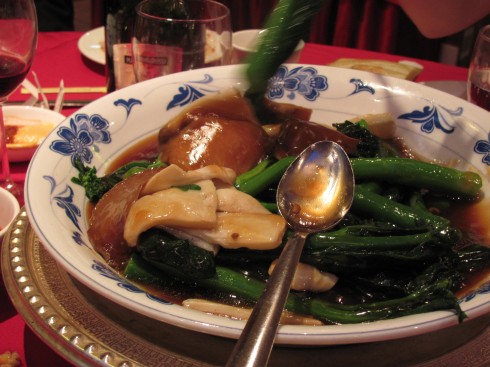 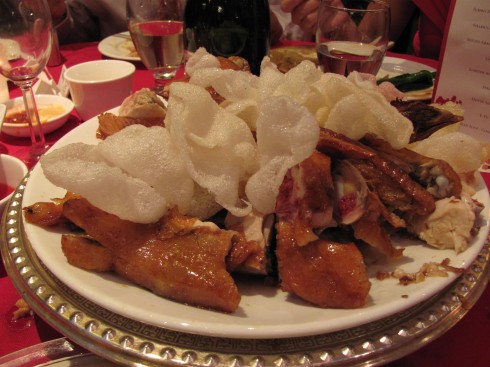 Crispy "fried chicken" with shrimp chips. Notice that the chicken is bloody at the bone. Not a mistake. This is how this dish is served. The skin is super crispy. 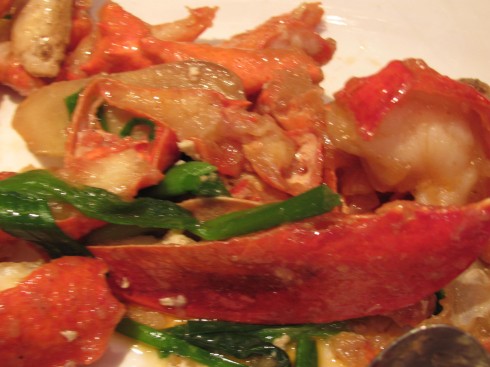 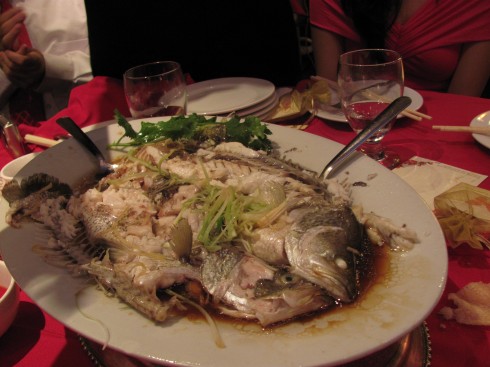 A pair of steamed fish. A couple. Awww. The menu says "live" fish but should read "fresh" fish. Chinglish! 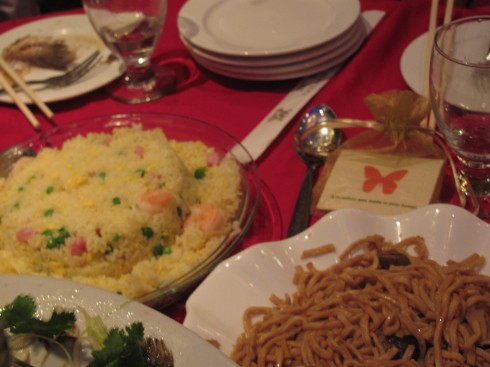 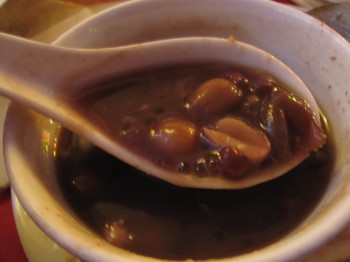 Dessert was an East-West sampler.

The happy couple had a pretty, Western-style wedding cake. There were also Chinese pastries — an acquired taste because they’re not sugary or buttery.

To see shots of a really lovely Chinese wedding banquet from start to finish, I have a new photo album on my facebook page. Some of the food was more than we could handle. My daughter’s a vegetarian and because of that, I don’t each much meat anymore. So I’d like to add this….for an excellent vegetarian banquet or meal of any sort, check out Buddha Bodai. There are two locations, one in Manhattan’s Chinatown or Flushing, Queens. 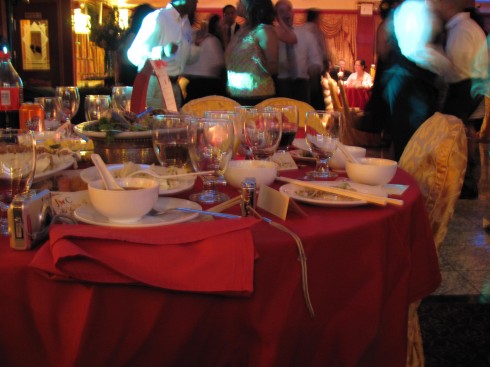